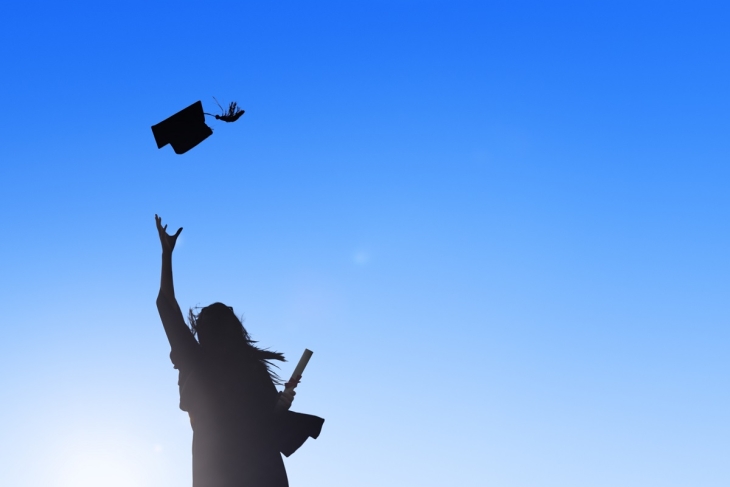 Non-test-based pathways to high school graduation raise concerns among accountability hawks as being low in rigor, subject to diminished standards, and susceptible to gaming. The concern is that diplomas conferred through these pathways do not truly demonstrate an individual’s readiness for college or career and thus that widening their use could devalue high school diplomas writ large. A recent working paper compares the college and workforce outcomes of Maryland students who graduated based on alternative criteria to test these very concerns.

The standard diploma pathway in the Old Line State requires passing scores on exit exams in algebra, biology, and English. Students who do not pass one or more of the exams after two tries are eligible for an alternative graduation pathway called the Bridge Plan for Academic Validation (Bridge). It allows students to demonstrate acquisition of basic skills and standards for graduating through projects and work portfolios. Importantly, Bridge students receive the same diploma as the students who pass the exams, so employers and college admissions officers don’t see any difference. Teachers help Bridge students design their project, identifying which standards need additional work based on incorrect exam answers. The projects are judged by a district review board, but the specific expectations are subjective and local boards may apply “qualitatively different criteria.” Eligible students are also allowed unlimited retakes and can keep trying to pass the exit exams as they pursue the Bridge option.

Analysts, led by University of Maryland’s Jane Arnold Lincove, follow four cohorts of students in the Maryland Longitudinal Data System from eighth grade through high school, then one year out after their on-time graduation. They are looking only at students eligible for Bridge (roughly 37,000 in their sample) and divide them into three mutually exclusive groups: (1) “bridgers,” who completed the Bridge program and graduated high school; (2) “test passers,” who retook the exam and graduated; and (3) “non-completers,” who failed to complete high school despite all the options. They want to see if students who complete Bridge acquire similar skills as those who pass the retest and if Bridge completers have superior skills and abilities to students who fail to complete high school.

Given that selection is an issue, Lincove and her team make use of a rich set of observable characteristics including race/ethnicity, gender, free lunch eligibility (FRL), special education and English language learner status, homeless status, and eligibility for Title I supports. They also control for eighth-grade indicators of academic and behavioral outcomes, including middle school test scores in math, English Language Arts, and science, as well as attendance and suspensions. They use an approach whereby they match students within cells. For example, in each cell group, they include students who attended the same high school in the same district and share the same gender, race/ethnicity, and FRL status. They also have similar failing exam scores and a similar number of failed exams. They also match on motivation to graduate by only comparing students who appear in the data in the fall of their senior year (that is, those who persisted through all of high school and did not drop out) and at least attempted to pass the three required exams.

Compared to students who graduate by retaking and passing exit exams, bridgers have lower college enrollment—they are six percentage points less likely to attend any college—but they have similar employment outcomes. That is, bridgers and test passers are employed at similar rates after high school. Relative to wages, bridgers who are employed and not in college earn 11.7 percent less in wages than similar noncollege attendees who passed the algebra exam in particular. They find no wage differences for biology and English exam passers and no differences in any of the subjects for students who are working and attending college.

Next, analysts look at all the students who completed Bridge, compared to students who did not complete high school. They find that bridgers are much better off in terms of postsecondary and labor-force opportunities, such that bridgers in any subject are more likely to attend college by six to nine percentage points, which is mostly driven by two-year college attendance. Bridgers are also more likely to be employed, by seven to nine percentage points, if not enrolled in college.

Lincove and her team add valuable data to the picture of these alternative, portfolio-style graduation pathways. The bottom line is that those who graduate in this manner are somewhat disadvantaged in college access, compared to those who eventually pass exit exams but are substantially more advantaged in both college and workforce outcomes than those students who fail to complete high school—at least as measured one year after high school graduation. This makes sense, as the negative consequences of dropping out of high school are well known. Some students need different kinds of support to remain attached to school and achieve some valuable level of completion before we let them go. Having at-risk students complete nonstandardized pathways is clearly preferable to them dropping out, so programs like Bridge may need to be a part of our last-line-of-defense supports.