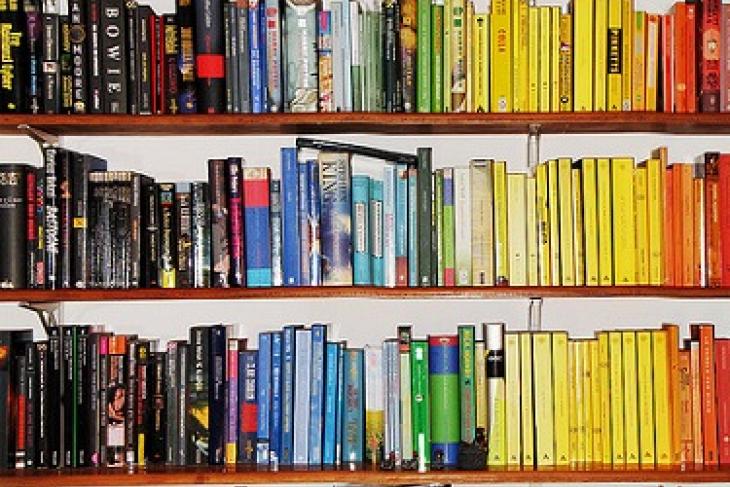 Over the last couple of months, the ESEA reauthorization discussion has focused on testing. But that’s just one part of the accountability conversation.

As I see it, there are four major components of the federal accountability framework: testing, school and district designations, performance targets, and interventions (more on these below). Whether ESEA is reauthorized this year depends on how these sub-issues get resolved.

Mike, trying to forecast the shape of a final bill, recently created a very helpful table explaining the NCLB policies that he assessed to be totally off the table, certain to survive, or up for debate. I think his table did a solid job of explaining the lay of the land.

But it seems to me that more is needed to help folks with a higher level of involvement, such as those actually crafting the new legislative language, advising members of Congress, hoping to persuade decision-makers from the outside, or trying to understand the inevitable bargains to be made.

I think the shortcoming of Mike’s table is that its entries (like “cascade of sanctions” and “school ratings”) aren’t binary; that is, they can’t be answered with a simple “yes” or “no.” Policymaking in general, especially complex congressional negotiations, requires (and has a way of finding) compromises.

Each of the four accountability components listed above encompasses a range of options. On one end of the spectrum is no federal accountability; on the other end is forceful accountability. Between lie an array of possibilities.

I’ve produced a graphic illustrating a spectrum for each component. 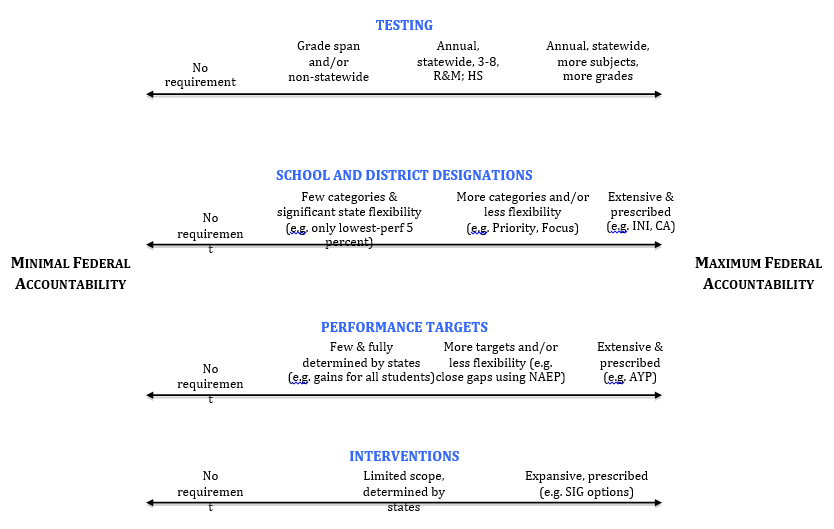 For testing, the minimal federal accountability option would be no testing requirement whatsoever. Slightly more accountability would require some testing but less than currently required, for example grade-span tests or non-statewide tests. Further to the right is current policy. A stronger requirement would, for instance, increase the number of tested grades or subjects.

The reauthorization could require no school and district designations (far left). Slightly more accountability might require states to identify a limited number of categories (such as the lowest-performing 5 percent of schools) while giving states great flexibility over how to calculate these categories. A stronger option would be the ESEA waiver approach of more categories (e.g., Priority, Focus, and Reward) and more prescriptive federal rules for creating these groups. A high-accountability system would, for example, mirror the strict NCLB rules for “in need of improvement (INI),” “corrective action (CA),” and “restructuring” status.

Similarly for performance targets, the options range from no requirements, to some number of targets with some degree of state flexibility, to the extensive and prescriptive NCLB rules related to AYP. On interventions, the reauthorization could say nothing about what states do about struggling schools, require states to do something about some number of schools, or mandate which schools get which kinds of interventions (for example, the requirements for NCLB’s “restructuring” status or the four SIG approaches).

In the days ahead, I’m going to show how the various proposals currently on the table fit into this model. This will provide a simple graphic display of how the proposals compare to one another as well as adumbrate a possible “sweet spot” where a consensus might emerge.

But for the time being, I hope this graphic accomplishes two things. First, a bill on the far left on all four dimensions amounts to essentially free federal money. Uncle Sam would provide billions to states and districts and require no assessments, no designations, no targets, and no interventions. That’s a nonstarter.

A bill on the far right on all four dimensions would be like NCLB (or a stronger version thereof). It would require the same or more tests as well as extensive and prescriptive designations, targets, and interventions. That bill wouldn’t go anywhere either.

The obvious takeaway is that a successful final bill lies somewhere in between. How far to the left or right it goes on each dimension is still an open question—though, as I’ll show in my next post, key individuals and groups are beginning to coalesce in certain areas.

Second, it’s probably a worthwhile use of ten minutes, whether you’re an ed-reform leader, a Hill staffer, a member of Congress, or anyone else interested in the future of ESEA, to decide where you stand on each component. In the not-too-distant future, white papers and high-level speeches will give way to good old-fashioned legislative horse-trading. Strength in both advocacy and bargaining depends on knowing your own mind, the contours of the debate, and the costs and benefits associated with the countless permutations.