Achievement gaps between poor and minority students and their peers are well documented and persistent. For years, data indicate that these students have generally been making slow but steady progress. But now results from the 2017 National Assessment of Educational Progress (NAEP) cast doubt on whether they remain on an upward trajectory. Nationally, the most recent trends have been flat to downwards for both black and Hispanic students, as well as for those in the bottom 10 percent in achievement.

Does Ohio follow the national trends? In this post, we’ll take a look at the NAEP data for Ohio’s low-income pupils and black students. Though not discussed here, average achievement among Hispanic students also lags behind their peers (their NAEP performance can be seen here). In contrast to Ohio’s state tests, which have changed in recent years, NAEP’s math and reading exams have remained largely consistent and provide a big-picture sense of the direction achievement is moving in Ohio. Keep in mind that NAEP takes “snapshots” of different students every two years; hence, it’s difficult to draw conclusions about what’s causing changes seen in the data. The shift to tablet assessments in 2017 may (or may not) have influenced results in states still using paper-and-pencil tests, but it’s unlikely to have affected Ohio, as more than 90 percent of students now take state exams online.

NAEP reports data by students’ eligibility for free or reduced price lunch (FRPL). Since eligibility is generally based on family income, this is a commonly used proxy for identifying low-income students. In Ohio and nationally, the average FRPL-eligible (or “low-income”) student performs below their peers. For instance, in 2017, just 24 percent of Ohio’s low-income students reached proficiency on NAEP’s fourth-grade reading exam, while 55 percent of higher-income students cleared this bar. When it comes to trends over time, figure 1 indicates that average scores for Ohio’s low-income students have slid in three of the four NAEP subject/grade combinations, starting in 2009 (for eighth grade reading) or 2011 (for fourth and eighth grade math). This is a reversal of the gains seen across these tests during the early 2000s. In only fourth grade reading is there a relatively consistent—but very modest—move upwards for low-income students from 2003–17. 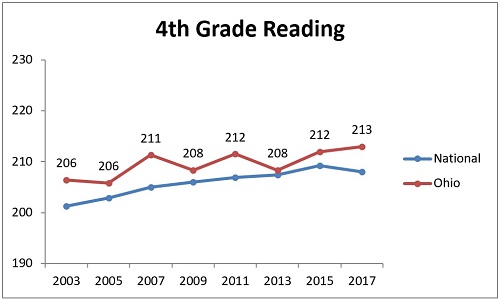 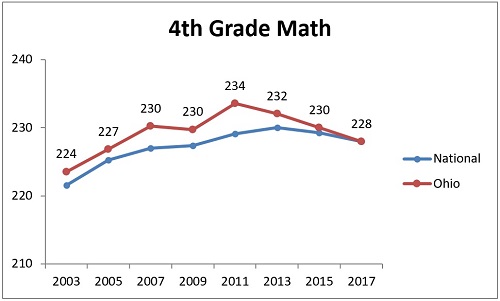 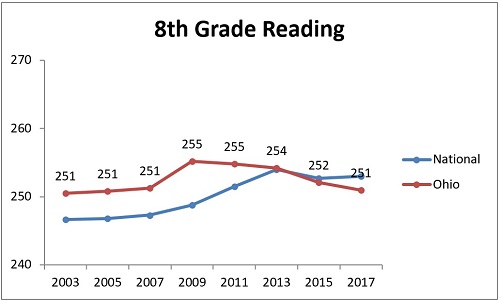 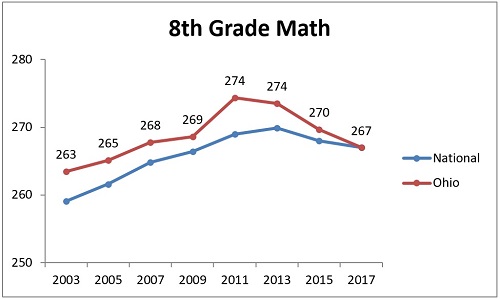 The source for figures 1 and 2 is the NAEP Data Explorer.

Among the major racial/ethnic groups, black students have struggled the most on achievement measures. That pattern continued in 2017. For example, on NAEP’s fourth grade reading exam, 15 percent of Ohio’s black pupils reached proficient or above, while 44 percent of white students met that standard. Understanding why this happens is a complicated area of research, but the data continue to reveal the need to significantly improve black students’ outcomes. NAEP trends, however, indicate that Ohio’s black students have made little progress over the past decade and a half. The results are somewhat uneven from year to year, but the general trend from 2003–17 is quite flat—a pattern also evident in Ohio’s ACT data. Also worrisome is that black students’ math performance has fallen in the most recent iterations of NAEP across both grades, wiping out the gains made in the early 2000s, while scores in reading have been more or less flat in both grades. Perhaps most alarming is that achievement among Ohio’s black students has drifted somewhat below the national average in all four assessment areas. 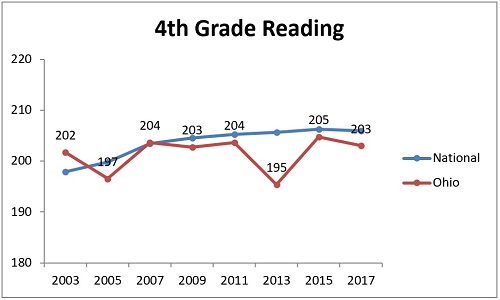 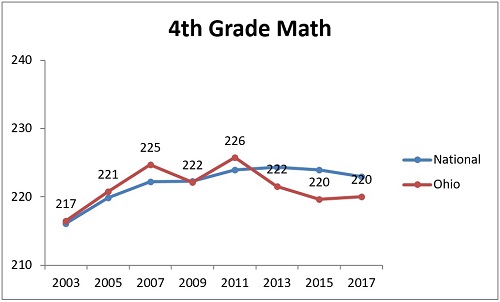 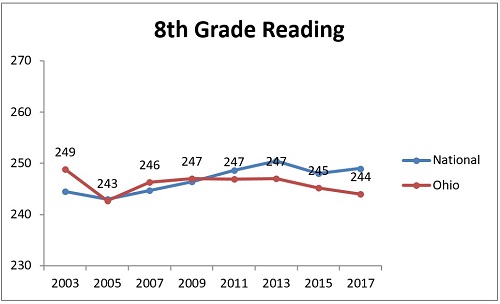 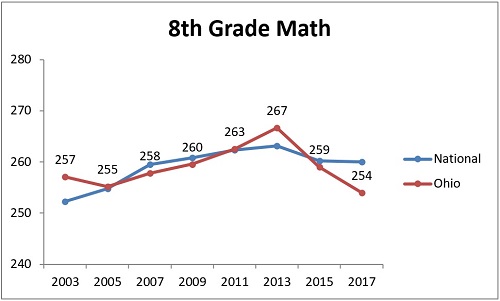 Given the dramatic progress needed to catch up to their peers, the NAEP trends for Ohio’s low-income and black students are disheartening. Even more troubling is that, according to a recent Brookings Institution analysis, Ohio is one of just a few states where achievement gaps are increasing, not narrowing. Although it’s possible that the recent slippage is due to the recession, that doesn’t change the basic story that “the racial achievement gap is a persistent fact of life,” as Roland Fryer and others put it a few years ago.

No one should be content with this status quo. Though not novel ideas, we should recommit to a couple basic tenets in the continuing quest to boost achievement for Ohio’s low-income and minority students.

Ever since the Coleman Report was released in the mid-1960s, data have revealed patterns of underachievement among less advantaged students. Tragically, the 2017 NAEP results continue to show massive gaps, with indications that progress among low-income and minority students has slowed, or even reversed, after years of progress. Fluency in math and reading remains key to advancement later in life, and Ohio must stay resolute its efforts to assure that all young people exit high school with a solid academic foundation.