Ten things every American should know 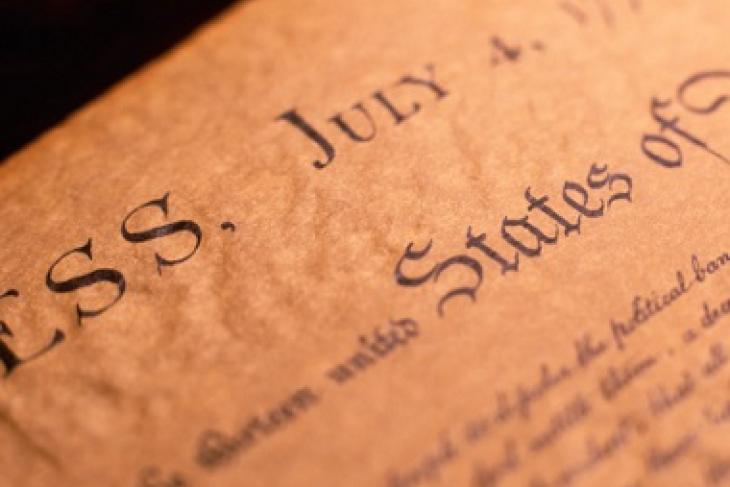 Nearly thirty years ago, a then-obscure University of Virginia professor named E.D. Hirsch, Jr. set off a hot national debate with the publication of Cultural Literacy. The book was an out-of-nowhere hit, spending six months on the New York Times best seller list on the strength of its list of five thousand people, events, books, and phrases that Hirsch declared "every American should know."

Eric Liu, the executive director of the Aspen Institute's Citizenship and American Identity Program, wants to revisit Hirsch's list. Building on his recent essay, "How to Be American," Liu argues that the United States needs such common knowledge more than ever, but that “a twenty-first-century sense of cultural literacy has to be radically more diverse and inclusive.” Liu has launched an intriguing effort to crowd-source a 2016 version of Hirsch's famous list—which, in retrospect, was a double-edged sword: It made Cultural Literacy a best seller, but it also resulted in the book becoming what Dan Willingham has called "the most misunderstood education book of the past fifty years." It also came out the same year as Allan Bloom's Closing of the American Mind, an equally unlikely success. Both were tarred with a "conservative" label. (For his part, Hirsch recently insisted, "I'm practically a socialist.")

Cultural Literacy was broadly misinterpreted as attempting to impose a WASPy canon, but it was really a curatorial effort firmly grounded in cognitive science. Language—particularly reading comprehension—runs on a common knowledge base shared between readers and speakers. Phrases like "Cinderella story" or "Dickensian squalor" are lost upon those who don't get the references, which literate writers and speakers assume their audiences know. For educators, the upshot of Hirsch's inventory is this: When schools fail to build a common knowledge base among our children—and particularly for those who come from low-income homes or are English-language learners—we are essentially condemning them to something less than full literacy and citizenship.

Liu has launched a website encouraging all comers to list ten things every American should know to be "culturally and civically literate." This laudable initiative risks misunderstanding the distinction between canon making and language comprehension. You cannot force language to become "radically more diverse and inclusive." It's a cultural artifact with a hive mind of its own. But let me not quibble. Liu's fundamental agreement with Hirsch on the need for common knowledge is unassailably correct. The dialogue he is trying to spark is indispensable for educators and the nation at large. It is simply the most important conversation we're not having.

In that spirit, I'm taking up Liu's challenge to come up with my own top-ten list. Let me confess I made no attempt whatsoever to be "inclusive." Such efforts strike me as doomed to frustrate and end in self-defeat, since every event or individual one might wish to include means myriad others are left out. Thus, I've chosen to focus on ideas, phrases, and principles that are the patrimony of all Americans and deeply woven into the fabric of the nation—whether through our founding documents, common narratives, or civic ideals.

1. "Life, Liberty and the pursuit of Happiness"

This most famous phrase from the Declaration of Independence sets any serious understanding of America in motion. To fully grasp its importance, however, means that learners must be conversant in Enlightenment thought, America's colonial history, and the revolutionary moment at which these words were written—and which gave them resonance. An entire education could be wrested from considering what it means in America to "pursue happiness." Perhaps it should.

If I had to choose only one, this would be it. This phrase from the Constitution establishes the overarching narrative for the whole of America's social history. Our nation may have been ordered around the prerogatives of a select class of citizens, but no serious contemporary thinker argues that civil rights can be legitimately denied to a person on the basis of race, color, sex, religion, national origin, disability, or sexual orientation. The ceaseless effort to form a more perfect union is—on our best days—the story of America.

The nation's motto, which translates to "out of many, one," first appeared on the Great Seal of the United States when adopted by Congress in 1782. In its original use, the phrase meant that a single new nation was birthed from the original thirteen states. Over the centuries, however, this durable motto has evolved to connote our status as a nation of immigrants—people of many races, religions, languages, and traditions who have come together as a single people in the American "melting pot" (a phrase itself badly in need of rehabilitation). Those wishing to view the American experiment through the lens of diversity, or make it the central narrative, should start here.

4. "A government of laws and not of men"

This concept reflects a political philosophy dating back to the ancient Greeks; but it was first applied to the United States by John Adams, repeated by John Marshall in Marbury v. Madison and uttered again by Gerald Ford in announcing the resignation of President Nixon. The idea that every government official pledges to uphold the Constitution is a seminal element of the American creed—the rule of law is above the power of any individual or institution. Those who find the word "men" anachronistic can substitute "equal justice under law" as inscribed over the door of Supreme Court building.

The phrase is familiar from Lincoln's Gettysburg Address, but to understand its significance and resonance means an appreciation for the historic novelty of self-rule.

No single phrase can capture the character and self-image of a large and diverse nation, but the title of Ralph Waldo Emerson's seminal 1841 essay still resonates. A half-century later, Frederick Jackson Turner argued "that coarseness and strength combined with acuteness and acquisitiveness…that restless, nervous energy; that dominant individualism" could all be attributed to the indelible stamp of the frontier on America's psyche and character. Alexis de Tocqueville made similar observations about the unique character of the citizenry in Democracy in America in 1835.

7. "The chief business of the American people is business"

It is impossible to separate the nation's history from its status as the most robust and productive industrial, financial, and economic engine the world has ever known, captured neatly in this famous Calvin Coolidge observation. America's large population, wealth of natural resources, entrepreneurial spirit, and rich legacy of inventions and innovation—from the telegraph to the lightbulb to the personal computer—made the United States the most prosperous nation in history through industry and free market capitalism.

John Winthrop's 1630 sermon described America as a "city upon a hill," a phrase Ronald Reagan constantly invoked centuries later. The debate over whether or not America has a unique role to play in transforming the world into a better place burns as hotly today as ever.

9. "Give me your tired, your poor, your huddled masses yearning to breathe free"

Emma Lazarus's stirring words etched in bronze in the pedestal of the Statue of Liberty, a few hundred yards from Ellis Island, are among the most aspirational sentiments ever penned about the promise of our nation. Every American school kid used to learn the verse by heart. We should insist they do so again. Some adults too.

Benjamin Franklin's response, when asked what kind of government had been decided upon by the delegates to the Constitutional convention, is a pointed reminder that self-rule must never be taken for granted—and of the historic longshot American democracy represents. His words may be more relevant today than at any time in our history.

There you have it. If every American could discuss each of these ten phrases with some degree of authority and nuance, we'd be an uncommonly literate, historically engaged, and thoughtful people. We'd also be well on our way to becoming the "radically more diverse and inclusive" nation we aspire to be. I'll put my list on Liu's website and on Twitter with the hashtag #everyamericanshouldknow. I look forward to seeing yours.