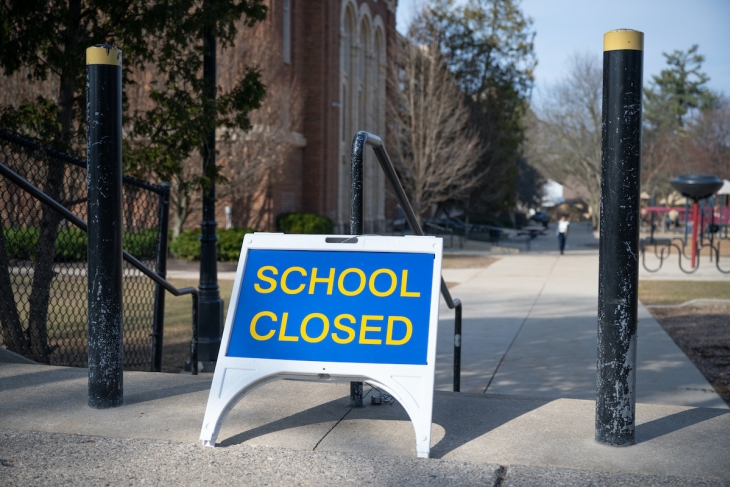 Barely a day goes by without another story reporting the negative effects of keeping schools closed. The issue is far more pronounced in blue states, where local teacher unions continue to stand in the way of reopening despite the entreaties of President Biden’s aides and their clumsy kowtowing to union brass. Meanwhile, Republicans have been having a field day with all of this, leveling accusations at the new administration and their union allies of putting politics ahead of kids.

As the trading of barbs continues, what’s easily lost is that kids are already back in school in much of the country, or are headed in that direction, thanks in large part to red states and their GOP governors. In states with a more purplish hue, it’s taken a bit more negotiation, as in Ohio where the state’s governor is using the carrot of teacher vaccinations as a stick to make schools reopen. The question now is how to engender similar movement in deep blue states with strong unions when they don’t want to get to yes. Other than hoping for Biden to become more assertive with his union friends, is there anything reformers can do about it?

Three recent articles, taken together, help to provide an answer. The first was written by AEI’s Rick Hess and published in The Dispatch. According to Hess, the school reopening debate is a case study in Politics 101:

In any political dispute, whether it concerns sugar subsidies or military base closures, decisions tend to favor organized interests and inertia tends to carry the day. Right now, that favors those who want schools closed. Changing this state of affairs requires more than impassioned pundits and a handful of frustrated parents (writes the pundit and parent). It requires changing the cost-benefit calculation for educational leaders.

It’s hard to overstate Hess’s point as the debate over reopening schools—at least when it comes to the science and the moral imperative—has largely been won. Schools should be open. But political progress has been elusive because of the unions’ savvy (e.g., AFT’s head honcho has been all over the news) and the palpable fear of Covid-19 that has taken hold of many educators and families alike.

The second was a deep dive into union activism penned by my friend Derrell Bradford in the pages of Education Next. Deftly tying multiple story threads together, Bradford argues that we’re in the throes of a de facto national teacher strike with a bonanza of a windfall on the line:

Biden’s proposed tripling of federal Title I education dollars annually, to about $48 billion from the current $16 billion, would allow for a significant expansion of local teacher headcount, bolstering union dues while circumventing the need to raise increased funds for teacher pay at the local level where the political and financial costs would be more sharply felt. These policy outcomes are quite possibly sufficient incentive to keep schools closed until they are enacted.

The key word here is “incentive.” The unions are playing a high-risk, high-reward hand of poker, where a loss of public good will is a possibility. But in looking at their cards, they see a lavish, once-in-a-lifetime political payoff that wouldn’t have been possible without the pandemic.

The question of incentives is also the thrust of the third piece, authored by the National Review’s Ramesh Ponnuru. With his trademark Vulcan dispassion, Ponnuru makes the case that bashing the unions does little if anything to help get students back into classrooms:

But what else did we think the teachers unions would do? They have a better reputation than other unions because most people value teachers and what they do for kids. Most of us know a teacher who is overworked and underappreciated. But the unions themselves don’t exist to pursue the interests of children, or the common good. Their job is to represent their members.

The unions’ current focus on what appears to be a minuscule risk to the safety of their members may be unreasonable. But looking after their safety is one of their leaders’ core responsibilities. Making sure children learn isn’t. That’s not an opinion about their character; it’s a fact about their incentives.

Casting aspersions at the unions is a favorite pastime among reformers—one that I’ve admittedly indulged in—but Ponnuru raises a valid point about which side is behaving rationally in this debate. Both Hess and Bradford suggest as much, too, in outlining the institutional, professional, and strategic reasons unions have for slow rolling reopening.

With millions of students now approaching a full year without in-person instruction in any form, reformers would do well to come together on how to alter the stakes in this game. This means governors have to step up and lead courageously by setting clear expectations for opening schools. Yes, it’s much harder in blue states, but not impossible. To wit, Virginia’s governor recently called on all schools to reopen next month. Districts quickly fell in line behind the plan. Rhode Island, a blue state in its purest form, is an even better example of vision and resolve. If every governor shared Gina Raimondo’s moxie, states would have thrown open their schoolhouse doors long ago.

What else might break the logjam in blue states? The ineptitude in cities like San Francisco could whet an appetite for change if current conditions are allowed to persist. Frustrated and angry parents in particular have strained old alliances and galvanized the space for new ones. The best thing reformers can do in this situation is to use a light touch and allow families to drive the conversation, letting the chips fall where they may. Still, it remains to be seen whether that will be enough to move the needle. The only thing for certain is that, from the get go, the unions deployed a coherent strategy and have a vested interest in preserving the current state of play.