Teacher diversity is yet another area where charter schools excel 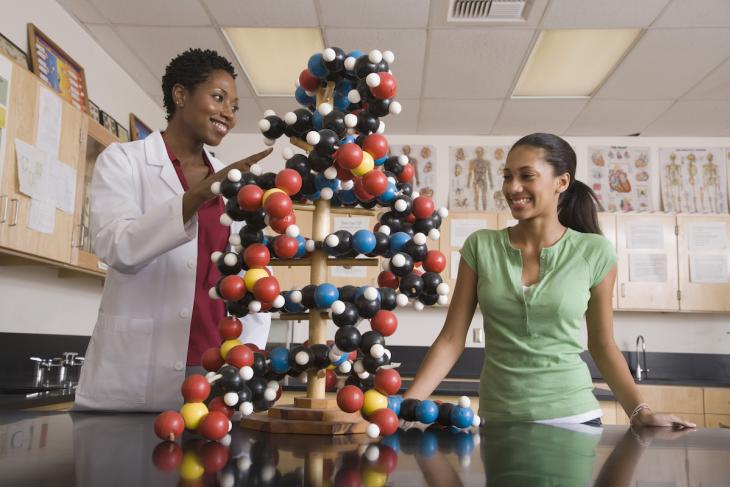 As conservatives working in education, we find ourselves drawn to Chief Justice Roberts’s observation that “it is a sordid business, this divvying us up by race.” And along with Dr. King, we want to believe in a world where everyone is judged by the content of their character, not the color of the skin. As such, we tend to think that teachers should be hired based on the quality of their instruction and their fit with a school’s mission—not their race or ethnicity. So we’ve been skeptical, even uncomfortable, about efforts to “match” students and teachers based on their race.

As the literature on “student-teacher race match” has expanded, however, we’ve found ourselves confronted with a simple empirical truth: There’s mounting evidence that students who have one or more same-race teachers experience clear advantages—at least some of the youngsters, at least some of the time. We may favor a race-blind world, but for children of color especially, exposure to teachers of the same race over the course of their educational careers seems to make a substantial, positive difference.

Not only have math and English language arts test scores risen significantly, but the impact of having just one same-race teacher during one’s time in the lower grades also increases black students’ odds of graduating from high school and enrolling in college. These matches also show positive nearer-term impacts on student attendance and discipline. Similar benefits occur in other educational settings, too, including community colleges.

As believers in various forms of school choice, including public charter schools, we naturally wondered whether the success of urban charter schools at boosting achievement and other outcomes might be due to their greater success in recruiting a diverse teaching staff. It stands to reason that schools where the diversity of the instructional team more closely resembles that of the students are likely to have more students of color assigned a teacher of the same race. Do such matches actually occur more often in the charter sector than in traditional public schools? And if so, are the benefits similar or different between sectors? To our knowledge, nobody had yet investigated these particular questions, so we turned to one scholar we were confident would know for sure: Dr. Seth Gershenson, Associate Professor at American University.

Gershenson is one of a handful of scholars who first rigorously examined the impact of race match and helped elevate its importance in education policy circles. He has studied not only the long-run impact of same-race teachers on students, but also its effect on intermediate pupil outcomes and on teachers’ beliefs. He confirmed that we were entering uncharted territory, and he was eager to augment his existing scholarship.

So began Fordham’s newest study, Student-Teacher Race Match in Charter and Traditional Public Schools. In a nutshell, Dr. Gershenson finds that, though white students in North Carolina (where he conducted the study) are about equally likely to have a white teacher in either traditional public or charter schools, black students in charters are about 50 percent more likely to have a same-race teacher than their black counterparts in traditional public schools, even when restricting the comparison to schools in urban areas. He also finds that the impact of having a same-race teacher is twice as large in charter schools as in traditional public schools, though those differences are statistically insignificant, likely due to small sample sizes. Finally, within charter schools, the effect of having a same-race teacher is about twice as large for nonwhite students as for white students.

We don’t know for sure whether and why student-teacher race match appears to have a bigger impact in the charter sector, particularly for kids of color. Perhaps there’s a compounding effect in some charters with a “high expectations” culture and a sizable proportion of teachers of color who may also have high expectations of same-race students.

But what is clear is that charter schools—in North Carolina at least—are doing a much better job of recruiting a diverse teaching force, and are subsequently more likely to match teachers and students on the basis of race. This may explain at least some of the student achievement advantage that urban charter schools enjoy compared to traditional public schools.

Moreover, amid shameful and bizarre allegations linking charter schools to the era of Jim Crow segregation, it was not lost on us that the effects of student-teacher race match were virtually identical whether a school was mostly white or mostly nonwhite.

Let’s repeat that: Not only do urban charter schools—serving mostly children of color— outperform their traditional public school peers when it comes to test scores and other outcomes, they also do a better job recruiting teachers of color, which means that more black and brown kids get the experience of being taught by a same-race teacher.

Now, maybe we are missing something, but that sure sounds progressive to us. One might assume, then, that as the Democratic Party continues to move left, its liberal wing would embrace charter schools. Not so much.

The debate shows no sign of letting up, with presidential hopeful Cory Booker now caught in the crosshairs. A recent headline from New York Magazine says simply, “Cory Booker Has a School Choice Problem.” That's because his views on charter schools “have gone out of fashion with many Democrats,” which “creates a conundrum for Booker,” whose legacy as Newark’s mayor was based on the proliferation of charter schools. And all of this is having real-world ramifications, as the Democrat-led House Appropriations Committee recently voted to cut $40 million from the federal charter schools program. Likewise, presidential hopeful Bernie Sanders recently called for a moratorium on federal funding of charter schools.

Again, we don’t reside on the left, but we find ourselves scratching our heads, given that urban charter schools have been found to be so effective at boosting achievement and college success for low-income kids and kids of color. And that competition from charters seems to help public schools improve, too. Sure seems progressive.

Now here in the present study is more evidence of how progressive charter schools are. They do a better job recruiting a diverse workforce and therefore providing black students more opportunities to have a teacher of their same race. And doing so may help to explain their superior results.

One might hope, like we did, that matching students and teachers by race wouldn’t matter in terms of the benefits gleaned by kids. But that’s not what the evidence is showing. We think, then, that this latest research provides an opportunity to practice humility on both sides of the ideological spectrum in light of what’s best for students.

For those of us in conservative quarters, that means acknowledging that a focus on race is sometimes needed for all students to thrive and shine.

For those in progressive quarters, that means acknowledging that traditional public schools have something to learn from their charter school peers, at least when it comes to recruiting a diverse workforce.

May we all humbly accept the invitation afforded to us!