The state of play with ESEA, in a single table 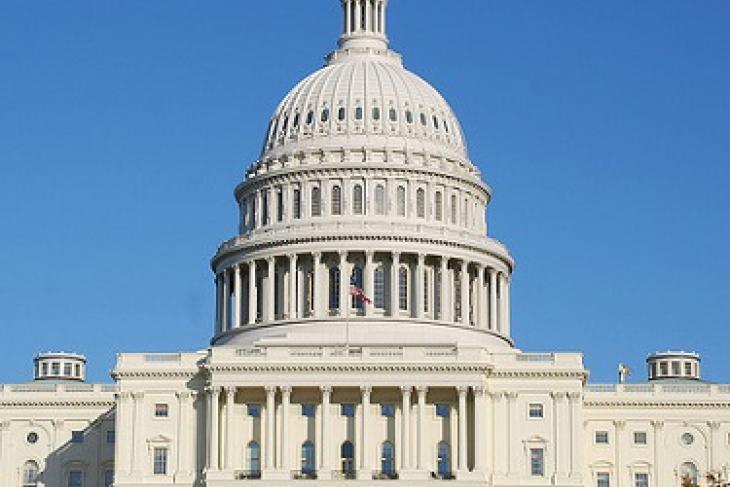 As everyone knows, the reauthorization of the Elementary and Secondary Education act is closer to the finish line now than at any time in the past eight years. (The law was due for an update in 2007—soon after NASA sent New Horizons to Pluto. That was a long time ago.)

For a great overview of where things stand, it’s hard to beat this excellent rundown by Alyson Klein of Politics K-12. But that won’t stop me from trotting out my ever-so-popular color-coded table. (Previous editions here, here, and here.)

The items that are “up in the air” are those that the Senate, House, and Obama administration will wrangle over in conference. 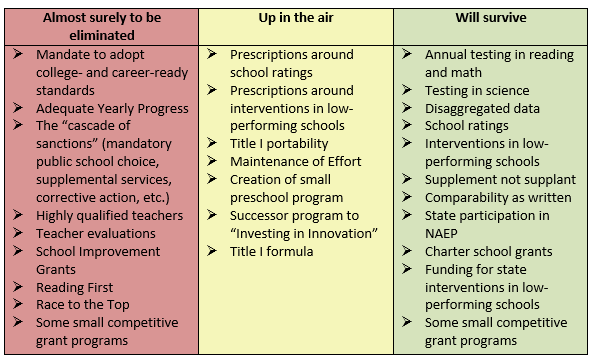 A few caveats: First, some of these provisions aren’t in current law—some were in the stimulus bill (like Race to the Top), some are in Arne Duncan’s conditional waivers (like teacher evaluations), and some are in one of the bills passed this month (like Title I portability). Second, the administration may very well try to add more items to the “up in the air” column in conference. For instance, it might try to save Race to the Top, even though it was included in neither the House nor Senate bills.

So what to make of where we are? The most important thing to notice is how short the “up in the air” column is. Though there will be a great gnashing of teeth by advocates on all sides—which will surely drag out the conference process longer than is needed—the contours of a deal are in sight.

Senator Lamar Alexander has said repeatedly that he wants to send the president a bill he can sign. That means moving the Senate bill to the left (the civil-rights left, that is) in order to satisfy both the administration and Bobby Scott, ranking member on the House Education Committee. A betting man would expect to see some elements of the Murphy amendment* folded into a final bill, meaning that there will be a bit more federal prescription around school ratings and interventions in failing schools.

That also means scrapping (or at least paring back)* House provisions that added Title I portability and subtracted current “maintenance-of-effort” provisions, and throwing the administration a bone on pre-K and “investing in innovation.”

All of which leaves the Title I formula for conferees to fight over—always a great sport to watch.

The end is near. Hooray!

* Note that I’ve tweaked my calculus since this article was first published on Fordham’s Flypaper blog on Monday, partly because of feedback from House Republicans. They are unlikely to agree to the Murphy Amendment as currently written, or anything close to it (nor would Senate Republicans, for that matter). And they might need something to show their constituents on choice and spending flexibility too (such as maintenance of effort).