Secretary King is wrong: ESEA was not a civil rights law 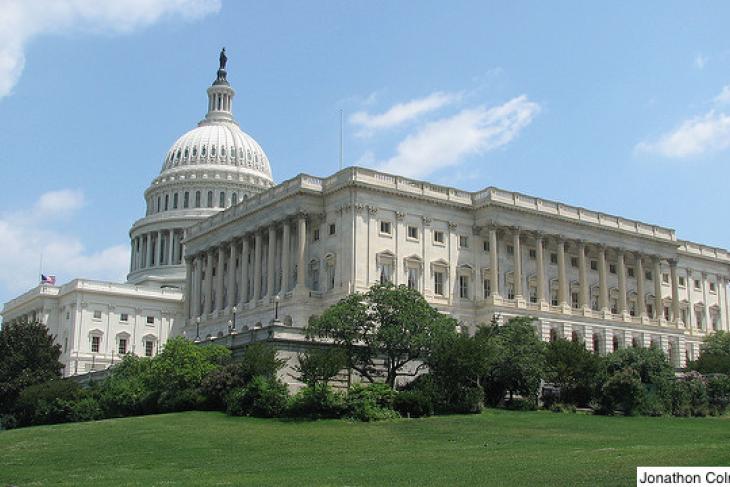 As Flypaper readers know all too well, newly arrived Education Secretary John B. King, Jr., is in hot water with Congress, state governors, and various school reformers. The Department of Education is moving forward with rules that would turn the Every Student Succeeds Act’s “supplement not supplant” provision into a cudgel to force states to equalize school spending.

In a statement released last month, King made matters worse by trying to justify the department's overreach as keeping with the legislation’s history—going back to the Elementary and Secondary Education Act of 1965—as a civil-rights measure:

Six decades after Brown v. Board, we have failed to close opportunity and achievement gaps for our African-American and Latino students at every level of education. And in far too many schools, we continue to offer them less—less access to the best teachers and the most challenging courses; less access to the services and supports that affluent students often take for granted; and less access to what it takes to succeed academically.

So we have urgent work to do as a country to truly provide equitable educational opportunities for all students. But we believe we stand better positioned to move forward, because of the Every Student Succeeds Act (ESSA). As you know, ESSA reauthorized the original Elementary and Secondary Education Act (ESEA) signed by President Johnson in 1965. It was a civil rights law then, as it is now.

Perhaps King was echoing President Obama, who also has contended the original ESEA was a civil-rights law. Regardless, this rhetoric is dirty pool—if you disagree with the new regulations, the logic goes, then you’re against civil rights.

And it is bogus history. ESEA was not a civil-rights law. It was an anti-poverty policy, a key part of Lyndon Johnson’s Great Society.

Seeing this is not difficult; one need only look at the text of ESEA as enacted (it’s only thirty-two pages long—a short read compared to ESSA's 392 pages). ESEA was a conditional-aid grant. It offered money to state and local education agencies, who could choose to take the money or not. Its purpose was to “strengthen and improve educational quality and educational opportunities in the nation’s elementary and secondary schools.” The law offered resources “in recognition of the special education needs of children of low-income families and the impact that concentrations of low-income families have on the ability of local education agencies to support adequate educational programs.”

Nowhere does the statute use the words “civil rights,” nor does it speak of equalizing spending or creating an individual entitlement to, well, anything. This stands in sharp contrast to the real civil-rights legislation of the 1960s, which explicitly conferred a legally enforceable right or privilege to persons. Title I of the Civil Rights Act of 1964 on “Voting Rights,” for example, sets forth prohibitions to protect individuals' right to vote.

One can also consult the words of Lyndon Johnson, who labored mightily to get ESEA enacted. When he signed the bill, he declared:

From our very beginnings as a nation, we have felt a fierce commitment to the ideal of education for everyone. It fixed itself into our democratic creed….As a son of a tenant farmer, I know that education is the only valid passport from poverty….Let me urge, as Thomas Jefferson urged his fellow countrymen one time to, and I quote, “Preach, my dear sir, a crusade against ignorance; establish and improve the law for educating the common people.”

Johnson held the law’s signing ceremony not at a school serving racial minorities, but at the school he attended in Johnson City, Texas. Additionally, when the act was amended in 1968, LBJ spoke not a word about civil rights. He spoke of the stuff ESEA had purchased.

This law has brought new help to all American schoolchildren—especially the poorest. It has brought special educational and health services to 9 million of our poorest children. It has created 3,600 new school libraries. Almost nine out of ten schoolchildren were helped by new teaching materials purchased during the first year of its library program. It has launched, all over the Nation, more than 2,200 exciting new education projects outside the classroom. Nearly 17 million children are being made richer....The 90th Congress was not as productive as I urged it to be. It left an agenda of unfinished business. But it did not turn back or halt or destroy the progress we have begun—not one single Great Society measure was repealed. The American people have spoken up on behalf of health and education and conservation and social progress. Their voices will not be ignored. Medicare is a fact—and an unchallenged success. The War on Poverty, the Model Cities Act, a whole range of consumer laws, dozens of measures which 3 years ago were only ideas; these programs live, and their promise lives. The greatest of these is education—without which no other progress is possible.

So, contrary to the secretary's assertions, ESEA was an anti-poverty, redistributive policy then and it is now. It has delivered money and more to every state and local education agency, for the benefit of poor, non-poor, white, and nonwhite children alike.

Kevin R. Kosar is a senior fellow at the R Street Institute. He is the author of Failing Grades: The Federal Politics of Education, and the creator of the Federal Education Policy History website.