Punishing achievement in our schools 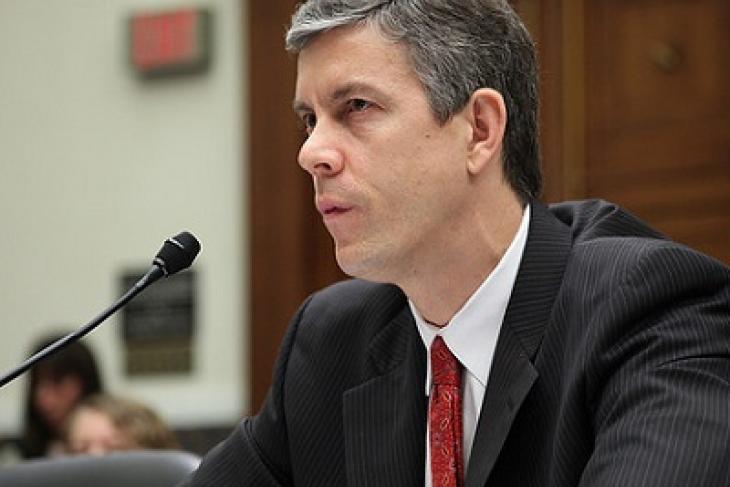 President Obama’s contempt for the Constitution, and Secretary of Education Arne Duncan’s unfortunate disregard of that document, have been loudly and justly decried by critics of executive overreach. Less heralded, but equally troubling, is the mission creep of the Office for Civil Rights as it works to reshape the education world and to right whatever alleged wrongs it thinks it sees.

All of these officials and agencies are seeking to accomplish policy goals that they believe are good for America, and I’m not impugning their motives. But they are playing fast and loose with their job descriptions and responsibilities under law.

Much has been written and said about Obama and Duncan. Let’s focus here on OCR. Mike Petrilli has already exposed the folly of the agency’s witch hunt for disparate impact in school discipline and explained the challenges it will pose for educators trying to run schools that are conducive to learning. In the matter of sexual harassment, I and others have written about the ill-conceived substitution of university conduct codes, unreasonable evidentiary standards, and star-chamber procedures for longstanding law-enforcement practices. (This carries more than a whiff of hypocrisy, as those whom the government is “protecting” are the selfsame students who would bridle at any effort to constrain their freedom to have sex, get drunk, and skip class.)

The most recent exercise of mission creep and nanny-statism by OCR, and not yet adequately exposed, involves what the enforcers call “equal access to educational resources.” These include gifted-and-talented programs within schools as well as honors tracks, Advanced Placement courses, and, perhaps, Ms. Arkwright’s practice of dividing her third-graders into “bluebirds” and “redbirds” for reading instruction, as well as the Morgan School’s practice of “teaming” its seventh-grade math instructors so that students who are already pushing into algebra go to Mr. Janeway’s classroom, those who are right on grade level go to Ms. Reynolds’s, and those who are still struggling with long division make their way to Dr. Rosenthal’s room.

What if there turn out to be more girls than boys one of those rooms, or more Asian than Hispanic pupils? What if kids with dyslexia end up in the redbird reading group while those who are already enjoying Harry Potter at age eight wind up among the bluebirds? Yikes. Send in the feds.

It’s true that ability grouping is not exactly the same as tracking, and it’s also true that OCR does not specifically identify ability grouping as one of the activities in which it is searching for disparate impact. But look at the list of school programs and practices spelled out in this twenty-five-page Dear Colleague letter (with twelve more pages of footnotes) and ask yourself whether a school principal reading something so Orwellian would be likely to encourage teachers in her building to engage in ability grouping. I rather doubt it.

The principal and superintendent had better watch out, because federal enforcers may turn up at any moment. They’ll arrive faster if anybody registers a complaint. And they’ll force the school system into a complex and costly plan to rectify any disparities they find there.

First, in going after practices that separate kids on the basis of achievement, OCR will confound and cripple every educator’s favorite reform du jour, “differentiated instruction.” Because in the real world of middle schools with 200 sixth-graders, differentiation doesn’t mean true individualization. It means various forms of ability grouping.

Second, the U.S. is already having huge trouble paying attention to high achievers (some say “gifted and talented”) when we’re preoccupied with low achievers and dire schools. Anything that discourages such attention is bad for American economic growth and competitiveness, not to mention unfair to kids who are ready, willing, and able to soar but have trouble getting the teacher’s attention. (Disparate impact at the expense of high achievers and smart kids is apparently just fine with OCR.)

Third, some forms of “tracking” are good for poor kids, minority kids, and low achievers seeking a path to upward mobility. If anything, we need more of it in high-poverty schools. As Tom Loveless of the Brookings Institution has shown, those are the schools least likely to give their high achievers (who are also poor and minority kids) chances to accelerate and to learn with other high achievers.

At the high school level, “voc ed” has a bad name, and old-style tracking led to a lot of dead ends. But what about high-quality career and technical education for young people who want a good job but don’t necessarily want to go to a conventional college—or who haven’t been educated well enough in the early and middle grades to thrive in an AP classroom? Aren’t they going to get further if they have access to classes designed for them? At the very least, the choice of such classes?

Indeed, if OCR (and the Education Department more broadly) were as interested in giving people school choices as in deciding what’s good for them, I’d be a lot less apprehensive. But they’re not. They’ve been throwing monkey wrenches into all sorts of choice programs and policies because they think they know better where people belong.

Fourth, of course we want to see more minority kids succeed in AP classes and International Baccalaureate (IB) programs, just as we want to see more boys succeed in English and girls in physics. Insofar as the education system is capable of achieving these goals, however, it needs to strive comprehensively from kindergarten (or preschool) onward. Swatting high schools because elementary schools didn’t send them an ethnically balanced collection of kids ready for AP and IB does not accomplish any educationally desirable end.

Fifth, consider the likelihood that OCR’s threats may have the unintended effect of encouraging white and Asian families to decamp (more than they’ve already done) for predominantly white and Asian schools. Then, of course, there won’t be racial gaps in access to educational resources—because kids of other races won’t even be present.

If OCR wants to reengineer American education, why doesn’t it pay more attention to tracking in colleges? (Tracking! Not undergrads seeking protection from the consequences of their own behavior.) I’m talking about race and gender inequities in enrollments and course selections. Aren’t there too many Asians and not enough Latinos and blacks (and, for that matter, whites) at UCLA and Berkeley? Too many females and not enough males at Wellesley—and the reverse at West Point? Don’t too many black students (and not enough whites) major in African American studies, and too many girls (and not enough boys) in women’s studies? Are there enough straight students in gay studies? Why isn’t OCR trying to require every university, university department, and Ph.D. program in the land to reflect the nation’s demographics?

Finally, here’s one more to keep them busy — and off the backs of our struggling schools. As a left-handed, near-sighted, color-blind person, I have been disparately impacted for many decades myself by a host of educational institutions: given desks designed for right-handers and seated at tables next to right-handed people so that our elbows collided; forced to decipher assignments and math problems on blackboards (and whiteboards, PowerPoint screens, etc.) that are too far for me to see them clearly; supplied with crayons and paints that have lost their labels and whose colors I cannot detect. I could go on. Were it not for the callousness of these educational institutions and the absence of federal enforcement on behalf of me and others like me, I might have learned more, done more, and accomplished more.

I understand that my particular handicaps aren’t currently spelled out in statute. But that hasn’t been a problem lately for the executive branch when it finds more wrongs to right.