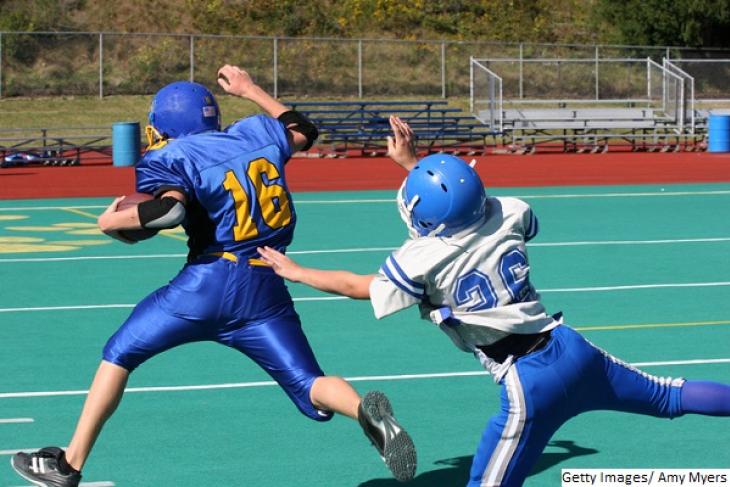 The University of Mount Union in Alliance, Ohio is home to one of the most successful college football programs in America. The Purple Raiders have won twelve national championships since 1993 and have appeared in the title game eleven years in a row—a record of excellence matched by few collegiate teams in any sport.

If you’re wondering why you’ve never heard of Mount Union, why they’re not mentioned in the same breath as football powerhouses like Alabama, Notre Dame or Ohio State, which has only one national championship in the last ten years, you’re not alone. It’s because Mount Union plays in Division III. They are not in the same league, literally, as the big Division I teams chasing bowl berths and the chance to be crowned national champs on New Year’s Day.

Mount Union and Ohio State both play football, but it’s barely the same game. If Mount Union were to square off against even a mediocre Division I football team, it would almost certainly be crushed. If your sights are set on a career in the NFL, there is a long list of Ohio schools that offer you better odds. Not just Ohio State, which had fifty-six alumni in the NFL at the start of the season: Miami, Ohio U., Cincinnati, and Akron all have more alumni in the pros than Mount Union, which has four.

I don’t know if my Fordham colleagues Mike Petrilli and Aaron Churchill are college football fans. But their effort to valorize academic growth over proficiency as a means of rating K–12 schools makes as little sense as arguing that Mount Union is just as good as Ohio State. Both can claim to host top-ranked football programs, but even casual fans would reject the comparison as pointless. Nothing about the two teams, from the athletes they attract to the money that goes into their respective programs, is remotely comparable. It wouldn’t even occur to most of us to try.

Mike and Aaron are of course correct to state that “proficiency rates are correlated with student demographics and prior achievement.” (Size, speed, and demonstrated talent are pretty much what separates those who play football for Ohio State from Mount Union, come to think of it.) It is also true that “if schools are judged predominantly on these rates, almost every high-poverty school will be labeled a failure.” This, they insist, will “demoralize educators and/or hurt the credibility of school accountability systems.” But back to my football analogy: any accountability system that seeks to compare Mount Union and Ohio State doesn’t deserve credibility. It’s not a serious comparison. The way to avoid unfair comparisons is by not making them in the first place.

To be clear, I am not in any way accountability-averse. Parents need to know if their children are attending a decent school and taxpayers are entitled to know if their tax dollars are being spent well or poorly. But the need to assign a letter grade to a school—and to make those grades “fair” to those who work in them by avoiding “unfair” comparisons—is not an education problem, it’s a political problem. The real world judges students by proficiency. It just won’t do to acknowledge that it’s correlated with student demographics, then ignore that when it comes to evaluating schools.

Early in my teaching career I spent a couple of days at one of New York City’s best private girls’ schools—the kind that wealthy Manhattanites would knife each other to get their kids into in order to set them on the path to the Ivy League and beyond. I sat in a fourth-grade classroom one morning and listened as the girls read aloud stories they had written retelling the story of Noah’s Ark from the perspective of one of the animals. The first girl got up to read her work. It was clever and well-written, and I had two immediate thoughts: the first was that even the best writers among my fifth-grade students in a nearby struggling public school couldn’t come close to producing what this fourth grader had penned. My second thought was, “It’s gonna’ suck to be the girl who has to read her piece next.”

Wrong. The next student blew the first away. And the third was even better still. Sharp characterization. Sitcom-quality dialogue. Witty observations. And after each paper was presented, the girls in the class offered praise to each writer along with smart and substantial suggestions for improving her story. I was agog. Later, I debriefed with the teacher and complimented her on the first-rate reader’s workshop class I had just witnessed. She shot me a quizzical look. I briefly explained the process-writing pedagogy I was learning to implement in my classroom, two subway stops and a world away in the South Bronx: brainstorming, drafting, peer editing, conferencing, and revising. My kids would typically spend four to six weeks on an assignment, starting by gathering “seed ideas” in their writer’s notebooks and concluding with a “publishing party,” where the class shared their finished work. Wasn’t this what I was just watching?

Another quizzical look. “That was their homework,” she said.

Later, meeting with my host, the head of the lower school, I told her, “Here is what you and I have in common. Every morning we go to work in a place called a school. And that’s about it.” An overstatement, but not much of one. I was spending most of my time on classroom management and dealing with behavior problems. In the entire day at the private girls’ school, I’d seen only one corrective action. A fifth-grade teacher asked a sleepy student to take her head off her desk.

An early lesson for a new teacher, but it stuck. We may all be holding footballs but we are not playing the same game. Sure, I could content myself with the growth my kids might be making. But in the very near future, my students would be competing with those other girls and many others—for college admissions, jobs, and other opportunities. If my students or their parents were told by people like me that they were attending an “A” rated school, we’d be doing them an enormous disservice. We’d be lying to them.

Perhaps the answer is to break schools into leagues or divisions for the purposes of ratings and comparisons, just like we do for sports. But let’s not pretend for a second that we can compare unlike schools and student populations simply because it makes us feel better or solves a political problem to do so. We’re not all playing the same game.