An octet of dualisms for the new year 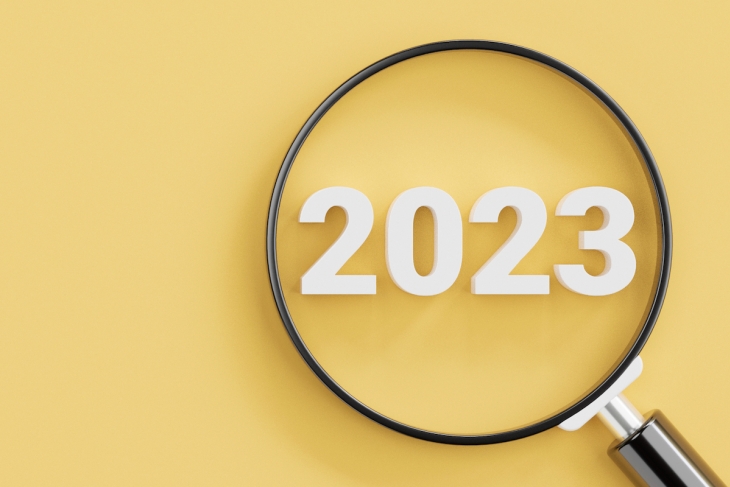 The Wall Street Journal’s regular Tuesday columnist, the wise, erudite (and British) Gerard Baker, kicked off 2023 by urging humility. Let us not resolve too much, let us abjure absolute certainty, and let us shun “the binary mind-set...

...that has seized our thinking about the kind of society and world we think we should live in. This is the mind-set that insists that every issue and question we confront poses an existential threat to our way of life if we don’t select the “right” choice. At this time of year especially, as we look back at the usual mix of things we got right and wrong, and forward to our hopes and plans, can we at least acknowledge the complexity of a world where our certainties proved so uncertain?

Humility is not perhaps the quality for which I’m best known. (You could double check with my family.) But I applaud Baker for reminding us that it’s wrong to be too certain that one is right and the other guy is dead wrong, that it’s possible for things to be partly true, for two seemingly opposed things to both be true and not entirely opposed, and that we’d be better people and live in a better society if we avoided either projecting absolute certainty about much of anything or demanding total acceptance of our most certain views by others.

Let me therefore launch the year with an octet of dualisms, eight pairs of statements that relate to education that I believe are both at least partly true, even though they seem to state opposing views (or realities).

1a: The pandemic was an unmitigated disaster for American education.

1b: Coming out of the pandemic, important elements of American education are savvier and more flexible than before.

The learning losses that our K–12 system now grapples with are grave, menacing—and as yet we’re not doing a great job of rectifying them. But we also watched thousands of schools adapt to the challenge, remain open while taking precautions, and continue to educate their pupils, often in innovative ways that blend technology with in-person instruction. We watched the swift invention of new forms of schooling, new choices, and the exercise of unprecedented engagement and interest by parents. We also saw political energies engaged that, while sometimes worrying, mostly feel like fresh breezes blowing through the stuffy corridors of districts and schools.

2a: The more school choice the better.

2b: A lot of schools of choice aren’t worth attending.

Kids need schools that work for them and alternatives to schools that don’t, and parents need the capacity to match their daughters and sons with the best possible schools. Despite impressive expansion of increasingly diverse school-choice opportunities in much of the country, millions of U.S. families still lack access to alternatives. So more school choice is needed. Yet too many schools—including “schools of choice,” whether district-operated, charter, or private—have displayed year after year of achievement and student-growth results so dismal that families should shun them. And too many of those schools mask their academic failures behind boasts and come-ons designed to attract kids and parents who aren’t good choosers.

3a: It’s time to focus more on what’s taught, less on the structures and governance of schooling

3b: Until we reform K–12’s archaic structures and rigidities, effective teaching and learning cannot happen.

Quality curriculum aligned with ambitious standards is fast emerging into the ed-reform sun, and that’s a good thing. Structures and policies alone don’t teach anybody anything. But—as painfully displayed in many places by districts’ child-averse reactions to the pandemic and inept, sluggish, and half-hearted efforts to overcome learning loss—the principal structures through which K–12 education is delivered in the U.S. are inflexible, authoritarian, and adult-centric. Local school districts overseen by locally elected school boards rarely put kids first, cannot flex when circumstances change, and are wedded to practices—Carnegie units, for example, year-long age-based grades, and six-hour days—that effectively block both teachers and students from the successful delivery of essential learning.

4a: Standards, testing, and accountability have run their course, done all they can, and done some harm along the way. Let’s move on.

4b: It’s time to double down on quality academic standards and results-based school accountability.

American education got some needed boosts from two-plus decades of the trinitarian reform strategy of standards, assessments, and results-based school accountability. Along the way, we learned some lessons about collateral damage: teaching to the tests, for example, narrowing the curriculum, mislabeling good schools, neglecting advanced learners, and more. We also saw more clearly how many of the things we want schools to do for kids—character building, persistence, tolerance, self-discipline, and more—cannot be gauged via standardized test scores. So, yes, we need a more diverse array of targets, metrics, criteria, and remedies. But there’s a baby in that bathwater that must not be discarded: the centrality of children mastering the core curriculum in ever more sophisticated ways so as to be well prepared for career, college, and citizenship. For that to happen, we must persist with ambitious academic standards, reliable means of gauging progress toward them, and rewards and interventions for schools depending on how well they move their pupils—all their pupils—toward mastery.

5a: We’ve oversold “college for all” and need alternate pathways for kids.

5b: No educator doesn’t want their kids to graduate from four-year colleges.

Too many young Americans see nothing in their K–12 schooling that isn’t pointed toward college, and a lamentable fraction of them end up in colleges they don’t necessarily see the point of attending and for which they’re ill-prepared to succeed. (Cue drop-outs and debt-burden.) We’ve overpromised and underdelivered when it comes to college-going, and millions of kids would benefit from high-quality alternatives such as apprenticeships and sophisticated CTE. Yet the U.S. education system has been hesitant and sluggish for at least three big reasons: it’s set in its ways and loath to take on the costs and disruptions of retooling the K–12 sequence in fundamental ways; it’s wary of “tracking” of any sort (though also thoroughly hypocritical on this point); and pretty much everyone in it is a four-year-college graduate (or more) who expects their own kids to do likewise. I’ve never seen a truly satisfactory answer to Howard Fuller’s penetrating query: Whose are the kids you think should not go to college?

6a: Teachers should be paid better.

6b: Until we right-size, upgrade, and redeploy the teaching force, teacher pay will remain mediocre.

School teachers are the largest single workforce in America, close to four million strong, more than any other occupation. And their numbers have grown far faster than the number of kids in their schools. (Today’s national teacher-student ratio is about half what it was when I attended elementary school.) Moreover, they’re employed in an industrial-style system, deployed and compensated without regard to expertise or performance, and locked into step-and-ladder salary structures. Yes, great teachers—the vast majority of teachers—should be paid more. But for this to happen in more than a marginal way, we’ll need a total overhaul of the K–12 HR system. Of course, there’s enormous resistance to any such thing—and very little reformist zeal to make it happen.

7a: Right and left are locked in an epic culture war over civics and history.

7b: There’s a lot of latent consensus waiting to be recognized and implemented.

A series of recent polls and surveys have shown widespread agreement across most of the U.S. public—parents included—regarding the essential content of civics and history education. It crosses party lines and goes well beyond “basic facts.” What’s more, any number of organizations have been working hard to develop better standards and curricula for these essential subjects. Most Americans want schools to teach “the whole story,” both triumphs and failures, and to engage kids with complex issues, not just stuff them with information. Yet professional culture warriors seem to take delight in faulting everybody else’s products—as well as their motives and perhaps their mothers-in-law—and in a politically divided country, each “side” suspects the other of being far more extreme than it actually is. One of the more sobering things I’ve read in ages is this from a recent report by “More in Common”:

One of our most notable findings is that both Democrats and Republicans alike grossly overestimate whether members of the opposing party hold extreme views.... Many Republicans may believe most Democrats want to teach American history as a history of shame, guilt and a repudiation of our founding figures—but we found that is not the case. Many Democrats may believe most Republicans want to teach American history in a way that glosses over the injustices of slavery and racism—but we found that is also inaccurate.

8a: SEL is a Trojan Horse for political indoctrination.

8b: For eons, schools have worked to teach valuable social and emotional skills to their pupils—and that should continue.

Every responsible educator knows, and has known forever, that kids don’t learn much when they’re upset, anxious, bullied, or traumatized, any more than when they’re cold or hungry. Every responsible educator also knows that good schools do their utmost to instill in their pupils self-control, sound values, tolerance, sportsmanship, and other vital social and emotional skills. In those important ways, SEL is old news, but because it’s not done well in every school or classroom, we benefit from renewed attention to it. Yet it’s slippery stuff that can easily distract schools from their core academic obligations and can slide into a negation of solid school discipline and good manners. As we found in a recent Fordham study, terminology alone can be worrying to parents, most of whom prefer a focus on specifics (e.g., teaching tolerance) rather than neologisms and abstractions.

You may not agree in all eight instances that both statements are least partly true, but I’ll wager that you think that about most of them. My thanks to Gerard Baker for a much-needed reminder that we’ll be better off if we acknowledge how seldom is there just one correct way of seeing things. It’s exhilarating to mount a soapbox and shout “I’m right and they’re wrong.” But so often that’s not true, it’s not fair, and it’s not helpful. Greetings, 2023.