If you want to understand why supporters of the Common Core are frustrated—OK, exasperated—by some of our opponents’ seemingly unlimited willingness to engage in dishonest debate, consider this latest episode.

Would you ever consider the question ‘Whom do you want to be president?’ to be asked of your third grader during a math class (or any class)?

Would you expect your fourth grader to be asked to create a chart of presidents along with their political persuasions? Or, how about a discussion on whether the 2000 presidential election resulted in a “fair” outcome? Or, what if the teacher for your sixth grader was advised to “be prepared” to discuss the “politically charged” 2000 election - all during math.

This was picked up by the Daily Caller’s Eric Owens on Wednesday, who piled on via his article, “Common Core MATH lesson plans attack Reagan, list Lincoln’s religion as ‘liberal’”

Another week has gone by and, like clockwork, some more hilariously awful Common Core math lessons have oozed out of the woodwork.

And the story jumped to cable news this morning on a Fox segment, “Common Core lesson lists Abraham Lincoln as a liberal.” 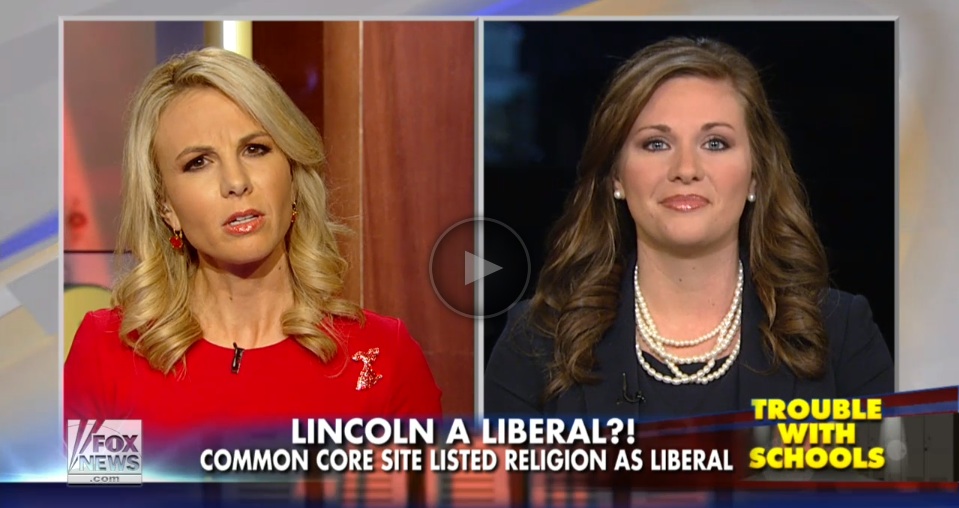 So this is pretty damning for the Common Core, right?

Or what about the now-infamous “Lincoln was a liberal” lesson? This one was copyrighted in…2009! Oh, and the website that listed Abraham Lincoln’s religion as “liberal” (before it was “quietly updated”), Infoplease.com, has absolutely zero to do with the Common Core.

This is like the Kevin Bacon game: six degrees of separation from the Common Core.

So let’s get this straight: EAG News found a couple of ridiculous lesson plans on an NCTM website, lesson plans written before the Common Core, and calls them “Common Core math questions.” (Ironically, the author of the article, Renee Nal, claims in her tag line that “her main objectives are to expose media and academic bias and to contribute to a positive shift in culture; where integrity, honesty and independent thought are held in high regard.”)

And so this morning, millions of people woke up to these claims about the Common Core on Fox News (this is the actual transcript):

Elisabeth Hasselbeck: Was Abraham Lincoln a liberal? That’s what one Common Core-aligned math lesson is set to teach your kids. Take a look. In a recommended link to Lincoln’s biography, which is supposed to provide key facts about him, it lists his religion as liberal. Joining us now with her take on this is the executive director of the Eagle Forum, Glyn Wright. Certainly something shocking to see when kids are supposed to be learning history. Oh wait, but this occurred under a math curriculum?

Glyn Wright: Right, right. This is just more evidence of the poor quality of education found with the Common Core. And even if this were conservative rhetoric we would still be opposed because the root of our opposition lies in the fact that this is a top-down, federally-controlled approach to education. It has started with standards that have already led to national testing which will soon lead to a national curriculum. Can you imagine if these were mandated even to our good teachers?

And it goes on from there.

I agree with my friends on the Right that there are principled reasons to oppose the Common Core. But I hope my friends will understand that a principled debate is not what we’re actually having today—and that this sort of dishonesty deserves to be called out as way, way out of bounds.