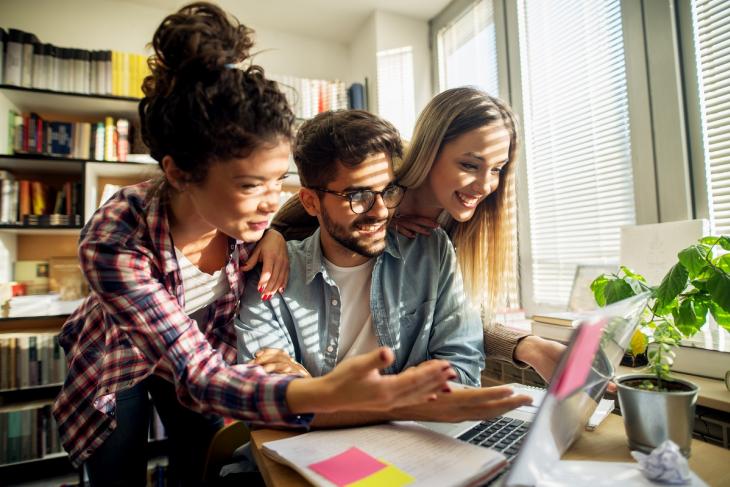 Parents who will be homeschooling (temporarily) while schools are closed because of COVID-19 can only do so much to keep kids learning, so do your parents a solid and use this time to find subjects that get you excited! There’s only so much Netflix you can watch before you get a funny taste in the back of your mouth. As Mike Petrilli wrote in a recent blog post, “It’s highly unlikely that our children will learn as much at home as they would have at school. That’s OK.” To me, at least, this unexpected and largely unstructured break is ideal for finding one’s own passion project (or more than one)! Here are some educational YouTube channels that have helped me find and explore my interests:

Produced by PBS digital, this channel—which is hosted by art curator Sarah Green—asks the big questions about art and tackles some of the most common critiques of art in general and of contemporary art in particular. Because most museums are closed (though you can and should visit a few virtually, including the Musée d’Orsay, the Van Gogh Museum, the Uffizi Gallery, and even the Guggenheim), this channel is the perfect entry into thinking deeply about why art matters. Whether or not you like modern art, videos like “The Case for Conceptual Art” and “Art Is Pretentious and other things I learned about art from the Internet” will make you reflect on why people make art and what art has to offer. The Art Assignment (as its name might suggest) also gives “assignments.” The host meets with artists who issue these “assignments” based on their work (no, not finger painting; more like creating a flyer for an event that does not exist). And because you may be avoiding restaurants for a while, look out for their Art Cooking videos and perhaps learn to cook like Salvador Dalí (among others).

This channel, coproduced by The Poetry Foundation, recreates the best part of elementary school: being read to! The poems range from classics such as Lewis Carrol’s “The Walrus and the Carpenter” and Edgar Allen Poe’s “The Raven” to “Good Bones” by Maggie Smith and “Mountain Dew Commercial Disguised as a Love Poem” by Matthew Olzmann. The videos are short—two to seven minutes—and are read either by poems’ own authors or by other writers who love them. Each video starts with a thirty-second introduction by the reader, explaining why they love the poem. Their love for literature is contagious.

Run by Grant Sanderson, the man behind Khan Academy’s Multivariable Calculus Series, this YouTube channel covers linear algebra, calculus, 3-D geometry, probability, and a little physics. Though the list of topics may seem a bit intimidating, the gorgeous animation and clear visual explanations make even “the hardest problem on the hardest test” approachable and intuitive. The stunning graphics mean that math once obscured by complex notation is now accessible to anyone with a solid foundation in algebra and some curiosity. Sanderson takes a new approach to math, saying, “When people engage with fiction, no one ever asks, ‘When am I going to use this?’ The same thing fiction can do for people, so can math. There’s wonder and mystery—and once there’s a story, you can go behind the mechanics.” After watching his videos, it’s hard to disagree.

Featuring a rotating cast of mathematicians and professors, this channel highlights almost every field within math. From ancient geometrical proofs to cutting-edge mathematical research, there’s something for everyone. This channel also highlights the human side of mathematics, focusing on the individual professors and researchers sharing their favorite tidbits. Their enthusiasm is infectious, and you too will start to look forward to the crinkle of their trademark brown paper.

This YouTube channel is run by Vi Hart, a self-described “mathemusician and philosopher.” Characterized by a goofy, surrealist style that belies its true educational value, this channel is almost certainly unlike any math class you have ever taken (for instance, it contains a video on Borromean onion rings). Anyone interested in fractals, conic sections, and the Fibonacci sequence, as explained by stick figures, should check out her “Doodling in Math Class” series. For those intrigued by infinity, her aptly titled “Infinite Series” is the thing. So long as you have a taste for the absurd, these math videos are exceptionally approachable!

This series, by Ted-Ed (whose entire channel is great), was recommended to me by a good friend. The conceit, putting historical figures on trial, lends itself to drawn-out dinner table debates and lots of fun. It also encourages nuance in historical thought. At about six minutes each, the itch to dig deeper afterward is almost impossible to resist. Some notable defendants include Genghis Khan, Henry VIII, and Richard Nixon.

Journey to the Microcosmos

You may or may not have heard of the tardigrade (adorable microscopic water bear), but Journey to the Microcosmos will introduce you to other microorganisms. If you have ever struggled with a school microscope to see a blur that is, apparently, some sort of microorganism and wished you could distinguish any features, this channel’s gorgeous videography will more than satisfy your desires. Endosymbiotic theory is never better than with crystal clear visuals of assorted Eukaryotes. The almost hypnotic voiceovers and soothing music make this a sort of bedtime story for the biology enthusiast. All you need to enjoy these videos is a healthy sense of wonder at the beauty of the natural world.

Via illustrations done in magic marker and explained by stick figures, Minutephysics delves into the nuances of physics and doesn’t shy away from any of the complexities. The short videos (typically one to ten minutes) are the perfect combination of mad scientist (How to Build a Lava Moat) and distinguished professor (a series on special relativity). The clear images and helpful analogies render even more complex videos clear to anyone with a decent understanding of geometry and algebra. In fact, for his series on special relativity, he built a diagram that “does the math of special relativity” for you and allows the viewer to focus on the physics at play.

If you have fond memories of field trips to the Natural History Museum, Eons, coproduced by PBS Digital and Complexly (the production company behind Crash Course), will bring you back to the Hall of Fossils of your childhood. With gorgeous graphics and ten- to fifteen-minute videos hosted by a variety of enthusiastic science communicators, what more could you want? This is intended for slightly younger audiences—but if you, like me, never outgrew your fossil phase, it is informative and tons of fun.

Wash your hands, and learn something interesting!

A note to parents: Both the Art Assignment and Ours Poetica may contain some material not suitable for younger kids, so consider giving them a onceover beforehand. Are you looking for YouTube channels, streaming videos, podcasts, and more for elementary school students? See Mike Petrilli’s suggestions here.

Emma Finn is a tenth grader at Phillips Exeter Academy and the granddaughter of a certain someone at the Thomas B. Fordham Institute.

Emma Finn is a tenth grader at Phillips Exeter Academy and the granddaughter of a certain someone at the Thomas B. Fordham Institute.