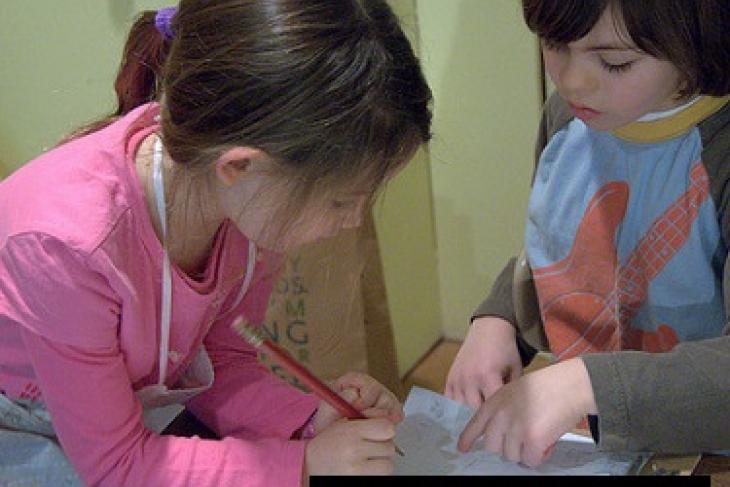 At Inside Schools, a website for parents covering New York City schools, reporter Lydie Raschka visits a dozen elementary schools and comes away concerned. “[I] saw firsthand how hard teachers are working to meet the new Common Core standards for reading,” she writes. “I also saw precious time wasted, as teachers seemed to confuse harder standards with puzzling language.” A striking example:

At the teacher's prompting, a kindergartner at PS 251 in Queens tries to define "text evidence" for the rest of the class. "Test ed-i-dence," says the 5-year-old, tripping over the unfamiliar words, "is something when you say the word and show the picture.

“Text evidence?” What's with this incomprehensible jargon in kindergarten?

Raschka is absolutely correct to criticize the use of such arcane language and the practice of asking five-year-olds to toss around phrases like “text evidence” in kindergarten. Where I think she's mistaken is in attributing it to Common Core.

Elementary school English language arts classrooms have long been in the thrall of nonsensical jargon. Children "activate prior knowledge" and make "text-to-text" or "text-to-self" connections in book discussions in the argot of "accountable talk" (itself an inscrutable bit of edu-speak). I’ve relentlessly banged the drum for years on the importance of building background knowledge as a critical component of reading comprehension. But I see no point in making second-graders sing about “building schema” like the kids in this video:

Why do we do this? I suspect it’s because jargon makes classroom conversation feel more sophisticated than it actually is; it pleases teachers to hear their terms of art parroted back. As a new teacher, I was thrilled the first time a kid said, “I’d like to make a text-to-text connection…” You think, “They’re really paying attention. I’ve taught them something!” Then you learn to focus on the next thing out of their mouths. Too often, it’s thin, banal, or barely relevant.

Doug Lemov, managing director of Uncommon Schools and author of Teach Like a Champion 2.0 (coming to Fordham on January 26) sees no benefit to kids or teachers from using jargon. “Teachers—or any professionals—should generally try to describe to students in plain words what they are doing and why in a way that helps them to be more intentional about what they are doing,” he says. “The job of the teacher, in other words, is to translate—whether it’s the periodic table or the science standards.”

One of the arguments against Common Core is that the standards are too dense and difficult for kids to understand. Do we really expect first graders to “decompose a number leading to a ten?” No. We expect them to be able to get the answer to 12 - 3 by thinking, “Twelve minus two is ten; subtract one more and that makes nine.” No value is added by insisting six-year-olds describe this simple bit of arithmetic as “decomposing numbers.”

The bottom line: The standards aren't written for kids to mimic. They're written for teachers to use in planning curriculum and instruction. It makes me crazy to see standards written on the board in classroom, another foolish orthodoxy that's virtually meaningless to kids.

But wait, don’t the standards demand “academic language?” Indeed, but it’s important to differentiate between academic language and jargon. Teachers often divide words into vocabulary tiers (oops, now I’m doing it). “Tier-one” words are those that kids generally learn early and orally—baby, dog, apple—before even coming to school. “Tier-three” words are specialized terms, unique to particular fields—isotope, integer. The sweet spot that Common Core tries to get at are “Tier-two” words like analysis, evaluate, and negligent that are common to sophisticated adult speech and writing, but which we perceive as ordinary, not specialized language. Tim Shananan said it best: “Knowing the 10,000 most frequent words in the language (words common in oral language) doesn’t count for much, but knowing the next 20,000–40,000 most frequent words is what distinguishes the educated from the uneducated.” And no, kids don’t need to know that these are “Tier-two” words.

So what’s going on in the classrooms Inside Schools visited? Call it the “John Wooden effect.” The legendary UCLA basketball coach famously remarked that “sports don’t build character, they reveal it.” The same thing is true about teaching. Common Core is revealing a lot, both good and bad, about what’s happening in our schools.