The diminishing significance of racism and poverty in education reform If you want a good cry mixed in with some inspiration, watch noted human rights lawyer and activist Bryan Stevenson give a searing account of bias against the poor and young men of color in a TED Talk about an Injustice. With more than four million views, Stevenson rails against a discriminatory criminal justice system that is disproportionately jailing black men. Indeed, an estimated 516,900 black males were in state or federal prison at year-end 2014, accounting for 37 percent of the male prison population—more than triple their percent in the general population. Asked why the prison population has grown so rapidly, Stevenson says “the great increase in mass incarceration wasn’t really due to violent crime. It was this misguided war on drugs...and three strikes laws that put people in prison forever for low-level property crimes like stealing a bicycle.”

Stevenson is a modern day hero, a fierce advocate for the condemned and wrongly accused. He is right that racism and excessively harsh sentencing laws contribute to the bursting of America’s jails. But even Stevenson’s impassioned oratory does not tell the whole story for why so many crimes are occurring in the first place.

Consider the findings of a powerful longitudinal study that followed a cohort of more than 6,400 young men for more than twenty years from birth through adolescence. This study investigated whether growing up in a fatherless home increased the susceptibility of male youths to a high risk of incarceration. Teenagers who grew up in non-intact families were 250 percent more likely to be locked up than those in married, mother-father families. The report stated that “although youths from father-absent households no longer represent an unusual family situation, there remains a significant divide between their incarceration outcomes and those of youths who grow up in a household with both of their parents.”

The Black Lives Matter movement has also attributed mass incarceration to virulent anti-Black racism, and has galvanized national attention in response to several incidences of police violence in which unarmed black men were killed. But rarely do its leaders ever acknowledge that there is a predictive link between high imprisonment rates and the staggering decline in family stability that now leaves 71 percent of all black babies born out of wedlock. This stunning collapse of family structure is only surpassed by the more than 600 percent increase in out-of-wedlock birth rates over the last five decades that is now decimating a growing number of white families.

Nor do these leaders ever cite other markers of cultural decline, such as when the New York City Department of Health and Mental Hygiene reported in 2012 that more black babies were aborted than born (31,328 “induced terminations” versus 24,758 live births). Whether you are conservative, liberal, or a pragmatist like me who believes that abortion should be safe, legal and rare, we should all agree that this milestone is indicative of coarsened relationships between men and women, and a social dysfunction that has profound, negative implications for children who are born.

The deafening silence on out-of-wedlock pregnancies and births, and the normally subsequent disruptive environments for raising children, demonstrates that the leaders of the most powerful prison reform and civil rights movements suffer from the same affliction as leaders, researchers, and funders in the education reform community. We share the same unfortunate inability to explicitly acknowledge that when widespread numbers of men in a community — regardless of race—impregnate women but then quit their responsibility to be solid husbands and fathers, there are nearly irreversible emotional, behavioral, and academic consequences on kids who live in those fragmented families.

Yes, black lives matter. Period. I am one. But the above data beg the question: To whom? Each black life, or any life of any race, must matter most to the two people who chose to give birth to and/or raise that girl or boy. No amount of angry protest, liberal guilt, compassionate conservatism, well-intended policy, or impact philanthropy—focused on symptoms versus underlying causes—can replace the fundamental love bestowed by two, married indispensable parents (gay or straight, biological or adoptive) who are ready to raise a child.

To estimate the number of children in kindergarten through twelfth grade who are not being raised in a two-parent, married structure, I compiled the longitudinal birth data in Figure 1 from thirteen “National Vital Statistics Reports” produced by the Centers for Disease Control and Prevention. From 2000 to 2012, more than 4.5 million babies were born to unwed teenage mothers, and more than 12 million babies were born out of wedlock to women of all races aged twenty four and under. According to the National Campaign to Prevent Teen and Unplanned Pregnancy, somewhere between 70 and 90 percent of these pregnancies were unplanned by these unmarried young people, many of whom already were or became poor.

Figure 1. Children born to unmarried mothers, by age of mother and year of birth 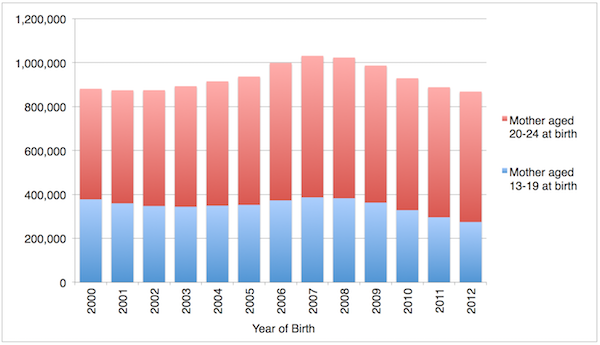 These staggering numbers of children being born outside of marriage are precisely why the education reform community must rethink the role we can and should play in constructing the curriculum to teach the next generation about family formation and the sequence of personal choices that give them the best shot at life fulfillment. While every student should learn these facts, these 12 million boys and girls are in our K–12 schools today, five days a week. They are at the greatest risk of repeating the same cycle of family instability they have likely witnessed every day of their young lives, despite the best efforts of their single parent or whoever stepped in as a guardian to raise them.

Of course in life there are no guarantees. Some troubled children are raised in the most stable of two-parent households. Others thrived, despite chaotic homes. Moreover, I work everyday with extraordinary women and men who have defied the odds. They overcame the challenge of having a child out of wedlock early in their lives and beat back the struggles of being a single parent to raise wonderful, college-bound children. But we know that is the path of most resistance, not least, as it relates to achieving the best outcomes for children.

Maybe one way to look at marriage is how British statesman Sir Winston Churchill referred to democracy in 1947:

So perhaps it is that marriage is the worst structure for child-rearing, except for all those other forms that have been tried from time to time that have reliably worse outcomes.

Overwhelming research, such as in the recently released study “Strong Families, Successful Students,” demonstrates the inextricable link between family stability and academic outcomes. The report used data from 1,340 Ohio children in the National Survey of Children’s Health. After controlling for student race and ethnicity, parental education, and a number of socioeconomic factors, the report finds that: (1) students from intact, married-parent families were 46 percent less likely to have their parents contacted by their school for negative school behavior; (2) students were 64 percent less likely to be held back in school if they came from a home with intact, married parents; and (3) having stably married parents increased a student’s chances of showing consistent engagement in schoolwork by 43 percent.

In the management bible Leadership on the Line, the authors encourage leaders to frequently get off the “dance floor” and move to a mental “balcony,” overlooking the people who are engaged in a day-to-day struggle, such as the hard work of educating children or dismantling the school-to-prison pipeline. From this symbolic perch, one can gain perspective from a broader vantage point, see patterns not easily visible from the front lines, and be bold in crafting adaptive solutions that actually confront the real, underlying issues.

As education leaders, researchers, and funders, we must regularly challenge our most deeply held beliefs to solve the riddle of generations of academic failure. We know that our schools do not exist in a vacuum, impenetrable to other forces, most importantly the force of family dysfunction.

My central thesis is that racism and poverty are diminishing in their significance as the causal factor driving the heartbreaking trauma and despair we as educators witness in our students nearly every day. Whether black, brown, or white, the explosion in out-of-wedlock pregnancies and births, and the subsequent normalization of children raised in one-parent homes, are now the most formidable barriers impeding our ability to improve poor academic outcomes.

We must accept the evidence that cultural norms that disassociate childbearing from marriage and family instability—across race and class—are increasingly the greatest determinants of a child's likelihood of life success.

From the balcony, we know the truth. Now let’s teach it to our children. All their lives matter.