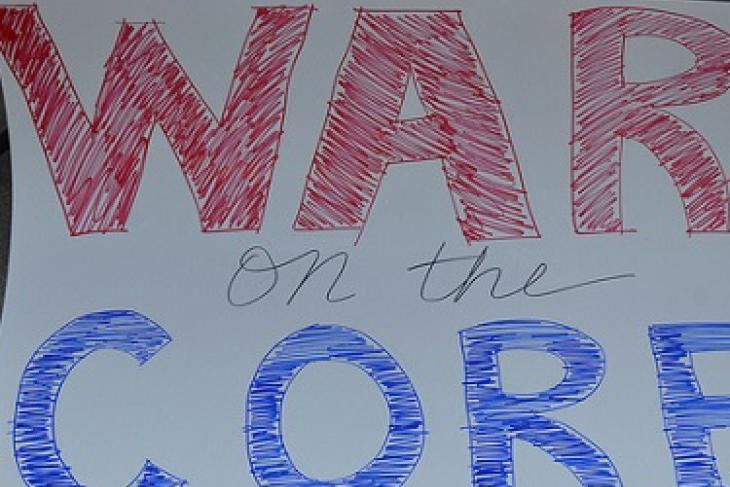 In November, former Florida Governor Jeb Bush suggested to hundreds of lawmakers and education reformers gathered for his foundation’s annual summit that “the rigor of the Common Core State Standards must be the new minimum.” Furthermore, he said, to “those states choosing a path other than Common Core, I say this: That’s fine. Except you should be aiming even higher and be bolder and raise standards and ask more of our students and the system.” Several Republican politicians, including Louisiana Senator (and gubernatorial hopeful) David Vitter and Mississippi Lieutenant Governor Tate Reeves, promptly took up his suggestion, calling on their states to replace the Common Core with standards that are even more challenging.

In theory, this position is exactly right. Academic standards are the province of the states; it’s within their rights to have their own standards if that’s what their leaders and residents want. Furthermore, though there are benefits to having common standards in terms of cost savings (for taxpayers) and continuity (for students who move across state lines, including the children of military families), most of Common Core’s upside stems from its rigor, not its sameness.

But if our fellow Republicans move to embrace standards that are even higher than Common Core, they’d better have a realistic plan for putting them in place. Otherwise, such calls will be viewed as political posturing and pandering at the expense of our children. Unfortunately, states that have thus far attempted this effort—replacing Common Core with something even stronger—have found that it is quite difficult to achieve.

For all the hoopla, just a handful of states have proposed significant changes to Common Core, and none of them has written higher standards. South Carolina’s new draft standards have been widely panned, and they will probably need to go back to the drawing board. Oklahoma passed a bill that requires Common Core to be replaced with the lower standards that were being used in the state while yet another set of standards is written—forcing educators to deal with three sets of standards in as many years. In Indiana, modifications to Common Core were met with skepticism from supporters and detractors alike (though Republican Governor Mike Pence and his team deserve credit for attempting to reach compromise on the standards and help districts with follow-through). And Missouri, which passed a bill to make changes to the standards, seems unlikely to please both those who want high standards and those who value standards only in terms of how different they are from Common Core.

The basic problem is that it’s impossible to draft standards that prepare students for college and career readiness and that look nothing like Common Core. That’s because Common Core, though not perfect, represents a good-faith effort to incorporate the current evidence of what students need to know and do to succeed in credit-bearing courses in college or to land a good-paying job—and the milestones younger students need to pass to reach those goals. That’s why states that are sincere about wanting to aim higher would be smart to start with Common Core as a base for additions or modifications—as Florida did when it added calculus standards several years ago.

Starting from scratch, on the other hand, pulls the rug out from under educators who have spent almost five years implementing Common Core in their classrooms. “You just get frustrated and tired with trying to appease people who really have no idea what’s going on with you day to day,” one kindergarten teacher told Mississippi’s Clarion-Ledger. “It’s just really mind-blowing that this is something they’re considering doing at this point.” Teachers are all too familiar with the fad du jour. Policymakers promised them that Common Core would be different, that it would have staying power. Teachers are right to be angry at those broken promises, especially because so much of the backlash to Common Core has little to do with the standards themselves.

So raise standards beyond Common Core? Sure—but you’d better make sure it’s not all talk and no action.