The case for Sonja Santelises as the twelfth U.S. Secretary of Education 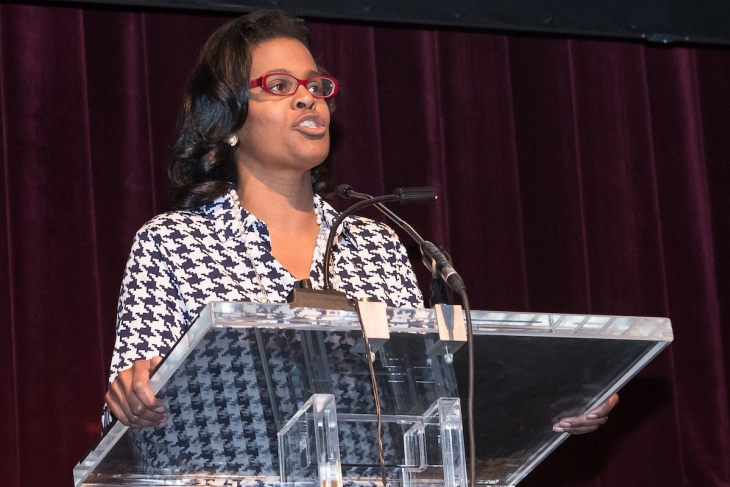 When it comes to education and the incoming Biden administration, all eyes are on who is put forward, likely before the year is out, as the next secretary of education. The deluge of desired traits and deserving names has been disorienting, prompting former secretary Arne Duncan to quip, “We’re looking for someone who walks on water.” It’s hard to see how anyone can completely fulfill the demanding job requirements, but assuming the role’s emphasis will continue to be on K–12, there’s one candidate who stands above the rest: the current CEO of Baltimore City Schools, Dr. Sonja Santelises.

Setting aside the recent attacks on her qualifications, which alone sets Santelises apart with her degrees from three Ivy League institutions, and her considerable experience working in and leading urban school systems, the larger consideration is selecting someone who can transcend divides and embody President-elect Biden’s admirable promise to be a unifying leader. For Democrats, there’s also an expectation that the next secretary is a current or former teacher and, based on the rumored short list, has teachers union ties. For Republicans, it’s hard but not impossible to see how a union apparatchik wouldn’t be DOA in a GOP or barely Democratic-controlled Senate. But Republicans should be interested in an education secretary who shares common cause in asking hard questions about what America’s students are actually learning in school. One would be hard pressed to find a prospect better than Santelises in marrying these disparate interests.

During her two tenures in the tumult of Charm City, previously as chief academic officer and now as CEO, Santelises has been a stabilizing force and a tireless advocate for high-quality curricula as a fundamental driver of change. Under her leadership, the district undertook an extensive audit of its instructional materials and found that its curriculum had more holes than a block of Swiss cheese—a troubling pattern that amounted in Santelises’ memorable phrase to “educational redlining.” She writes:

For example, our more than 80,000 students—80 percent of whom are Black—were taught about tragedies of African American history such as slavery and Jim Crow but learned nothing about the Great Migration and very little about the Harlem Renaissance. Our students didn’t learn about the systems of the human body until ninth grade. Some students didn’t learn about decimals until after they were tested for our gifted and talented program, meaning they couldn’t gain access to enriched classes. And in history, they learned much about the Civil War but little about the American Revolution.

This heartbreaking discovery brought about a complete system overhaul, followed by an “unusually strong” increase in standardized test scores. To be sure, pass rates in the district remain remarkably low, but Santelises appears to be onto something that is far too often overlooked in America’s schools: the critical role knowledge plays as a building block for good instruction.

A Secretary Santelises would have no formal jurisdiction over curriculum in the nation’s 13,000 school districts, but what she would lack in conferred authority would be more than made up for with her influence, credibility, and her charisma of competence. Previous secretaries have focused on structural changes to our nation’s schools (e.g., school choice, integration, teacher quality), but Santelises would be an intriguing selection if she took her priority of improving classroom instruction to a larger stage. Used appropriately and judiciously, the secretary’s convening power and bully pulpit in Santelises’s discerning hands could encourage state and district leaders to begin paying more attention to the black box of classroom instruction. What if, for example, she convened the former education secretaries along with key state and district leaders—think Bush 41’s 1989 Charlottesville education summit—to hear from E.D. Hirsch, Jr. or Daniel Willingham and discuss the value of shared knowledge to both individual success and societal well-being? The federal government can’t get directly involved with curricula, but it could help connect states with content experts and provide opportunities for peer learning and collaboration.

What’s more, the stars could be aligning for curriculum reform and Santelises. As ed reform and our national discourse has become more polarized, rich and engaging content could be one of the few remaining areas of shared real estate between Democrats and Republicans for seeing eye-to-eye on education. As stated well by my colleague Robert Pondiscio:

There is a story, and it’s about curriculum—perhaps the last, best, and almost entirely un-pulled education reform lever. Despite persuasive evidence suggesting that a high-quality curriculum is a more cost-effective means of improving student outcomes than many more popular ed reform measures, such as merit pay for teachers or reducing class size, states have largely ignored curriculum reform.

If following science is as important to Biden as he says it is, few state or district superintendents are more well-versed or more committed to knowledge-rich curricula and the science of reading than Santelises.

On the question of charter schools and choice, Santelises is less strident than die hard enthusiasts or critics might prefer. Baltimore City has over 900 students participating in Maryland’s voucher program, as well as the largest number of charter schools in the state. It would be easy to scapegoat one or both sectors in light of the district’s declining enrollment numbers, but Santelises welcomes the competition. As she told a local radio host, “We know families are going to make different choices. We [the district] want to be in the running.”

Today’s extraordinary circumstances also call for an education secretary who has been on the front lines of the pandemic and is clear-eyed about what our schools and students are facing, especially those living in our most marginalized communities. Of the many times I’ve heard her speak or engaged with her otherwise, I’ve found Santelises’s combination of thoughtfulness and straight talk to be a refreshing contrast to the banal platitudes and syrupy praise that are all too pervasive in this line of work.

Shortly after taking the reins in Baltimore, Santelises said, “I’m not a savior. I’m not stupid enough, or naive enough, to think I know everything or that I can save anybody. I’m just here to do the work.” No one can walk on water, but Santelises has been a rainmaker for her students, and one who refuses to get caught up in adult issues. Her roll-up-your-sleeves ethic is something that liberal and conservative leaders alike can embrace. Biden’s team would do well to keep Santelises top of mind as they weigh their options.