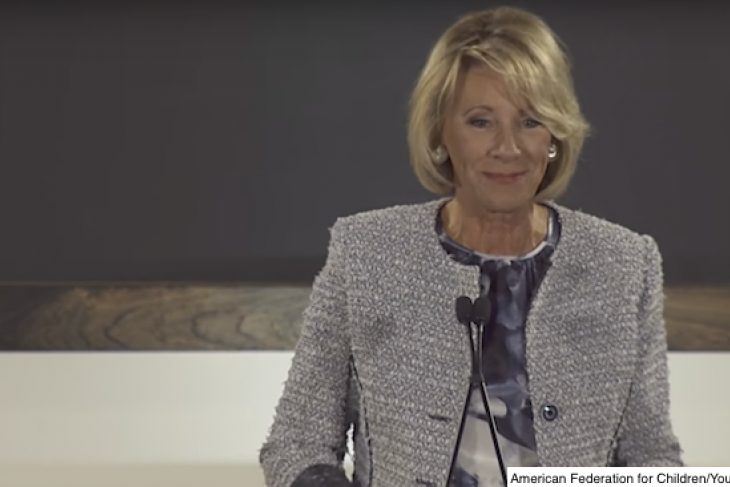 No one could pin down what Donald Trump thought about education during this year’s campaign. That’s all changed with the nomination of Betsy DeVos as Secretary of Education. In DeVos, Trump has selected a wily and battle-tested reformer, someone with clear policy goals who knows how to win a fight and make reform happen. She deserves our support.

Yet while some are celebrating, a gaggle of naysayers is spoiling the party.

The anti-school choice crowd, of course, opposes DeVos. In Florida, some teachers are already planning protests to decry DeVos’s nomination. The American Federation of Teachers and the National Education Association have condemned the choice, too.

We might expect criticism from teacher’s unions and other anti-school choice groups, but not from fellow education reformers. And yet some of them have been quick to join the chorus.

Some reject DeVos merely because she is willing to join the Trump cabinet. According to them, anyone who supports Trump is a misogynist and bigot.

It’s also unproductive: who knows what good DeVos might do from a cabinet position?

Michelle Rhee said it best in a statement after her much-publicized meeting with Trump: “Our job as Americans is to want [Mr. Trump] to succeed. Wishing for his failure would be wanting the failure of our millions of American children, who desperately need a better education.”

A slightly less radical criticism of DeVos centers on school regulation. In an op-ed the New York Times rushed to print, Douglas N. Harris chastised her for designing Detroit’s charter school system to run like the “wild west.” Harris claims that choice can work only within a regulatory framework that somehow guarantees quality schools. As a free market loving Republican, DeVos doesn’t approach the issue that way. But that doesn’t make her an outlaw in a black hat.

For those of us who believe in giving parents power, free markets are a good thing. Some parents may make mistakes in choosing schools—but that’s part of being free, as Americans have always known. Bringing in a flock of pedantic regulators can’t eliminate risk; it just creates other problems while eroding people’s liberty. Most parents won’t buy the argument that “experts” are better at choosing a school for their child than they are.

Two years ago, I was paired with a high school senior named Diana in a mentoring program. At the time, the average ACT score at her school was about 16, but she was an exception. She was accepted to an Ivy League school with a full scholarship. During one of our meetings, I asked Diana why she and her parents chose her high school and not one that was more highly regarded. Her reply was that they prized the religious identity of the school and the fact that the school helped her stay connected to her Mexican heritage. Those are factors that no expert can quantify. Now she’s earning a degree in New Haven. Would the regulators have predicted that?

Diana’s story shows that one size does not fit all.

Education reformers who are reflexively critical of DeVos are framing a narrow set of policies—the ones they prefer—as the very definition of “school choice,” “justice,” “morality,” or “accountability.” Within this narrow set of dogmas, it’s easy to caricature those who disagree with you as awful boogeymen, rather than accepting that others might legitimately see things differently.

Whether parents should be able to be able to choose schools that others consider bad is a reasonable question—and worthy of debate. But let’s not allow that to blind us from the fact that a school choice advocate has been nominated to a cabinet position. That’s “huge” for our movement. We need to support Betsy DeVos. Give her a chance! Let’s not allow Utopia to get in the way of real change.