An Open Letter to President Obama, Secretary Duncan and the 111th Congress

The Thomas B. Fordham Institute appraises the current policy landscape and its main players, and outlines the ideal federal role in K-12 education. In summary, the various education associations, interest groups, experts and think tanks cluster into three major factions:

• The System Defenders. They believe that the public education system is fundamentally
sound but needs additional resources in order to be more effective.
• The Army of the Potomac. This camp has generally sound instincts about reform, but suffers from its boundless faith in Washington's ability to accomplish significant positive change in K-12 education.
• The Local Controllers. They want Uncle Sam, for the most part, to butt out of K-12 education-but to keep sending money to states and districts.
• Fordham favors a fourth approach, which we call Reform Realism.

We believe the federal government should:

• Provide flexible dollars targeted at disadvantaged children. Principals and superintendents, facing the sunshine of transparency around their schools' results, should be free to spend Washington's dollars as they see fit.
• Foster common standards and tests. While asking federal bureaucrats or politicians themselves to set standards and create tests would be perilous, the President could bring governors together and task them with agreeing on what students should know and be able to do in core subjects at various stages of their K-12 schooling.
• Offer cash incentives to states or districts to embark upon promising but politically treacherous reforms. The cleanest way to do this is to enhance the Title I payments to jurisdictions that are pushing hard on important innovations such as performance-linked pay for teachers and quality school choices for families.
• Produce high-quality data and solid research on what does and doesn't work. Today, education research and statistics is the caboose of federal education policy when it should be the engine.
• Protect the civil rights of individual students and educators. This is a traditional and needed element of the federal role, both at the Education Department's Office for Civil Rights and in other agencies.

Meanwhile, Uncle Sam should eliminate the following items from his responsibilities:

• Oversight of state testing and reporting systems. Once we have national tests that yield reliable data, states should be free--under the watchful eyes of their citizens--to make decisions about how to turn that information into school ratings.
• Mandated school sanctions. Along with much else, we would eliminate No Child Left Behind's (NCLB) school transfer, free tutoring, and restructuring provisions. States decide how and when to incent and intervene.
• Dictates around teacher credentials. If reformers want to encourage changes in the human capital pipeline, they should incentivize it, not make rules about it. The "highly qualified teacher" mandate should be scrapped.

"As Reform Realists, we favor a vigorous but realistic federal role that respects what is best done from Washington and for the entire nation while dismissing federal programs, policies and practices that have not and cannot succeed," said Fordham president Chester E. Finn, Jr. "We hope others will join our small but feisty band."

In a Nutshell: An Open Letter to President-Elect Obama, Secretary-Designate Duncan and the 111th Congress provides a brief summary of Fordham's letter providing guidance to new federal education leaders 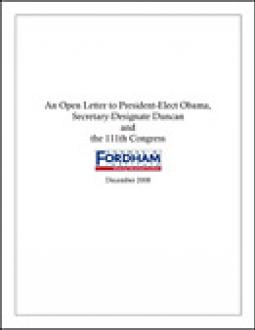 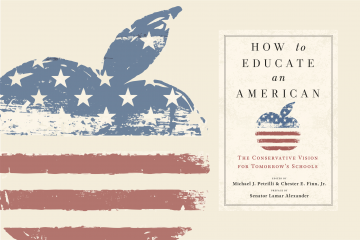