Whose America is it? Why I want my students to read Ta-Nehisi Coates but believe Lin-Manuel Miranda 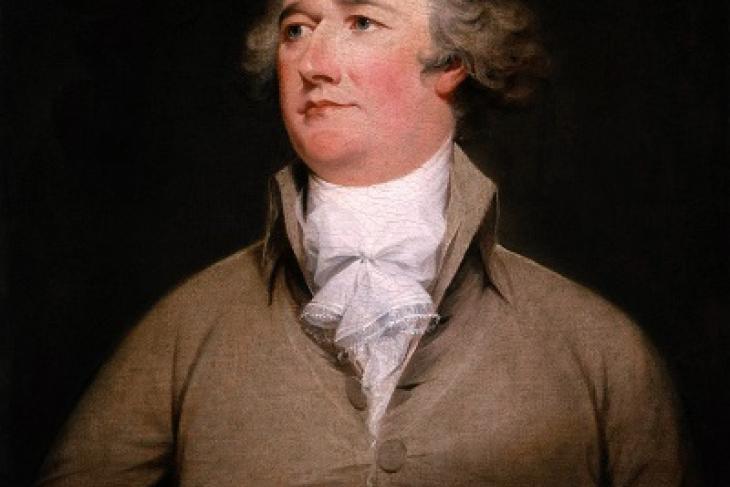 I have no idea if Lin-Manuel Miranda has read Ta-Nehisi Coates’s Between the World and Me; nor am I aware if Coates has seen Miranda’s Hamilton on Broadway. But it would be fascinating to listen to the two of them discuss each other’s work and their views on what it means to be young, brown, and American today.

All of us who work in classrooms with children of color would be richer if we could eavesdrop on such an exchange.

The parallels are striking. Both are young men of color who have created two of the most praised and dissected cultural works of the moment. Both were recent and richly deserving Macarthur Foundation “Genius Grant” recipients. Each turns his creative lens on our nation. But their respective visions of America, signaled through their work, could scarcely be more different.

We can be a bit promiscuous in our use of the word “genius,” but if it applies to anyone, it’s Lin-Manuel Miranda. Anyone who can read, as he did, Ron Chernow’s seven-hundred-page doorstop biography of Alexander Hamilton and think “Hip hop musical!” has a mind like few others.

But where Miranda’s genius burns bright, Coates’s burns hot. He is, by a considerable margin, our most influential contemporary thinker on race. He has made that ongoing conversation both more potent and pointed, arguing for reparations to compensate African Americans for the effects of slavery and Jim Crow. Miranda’s vision is capacious and generous; Coates’s is focused and prosecutorial.

It is not an overstatement to say that Hamilton is a watershed moment in America’s cultural evolution and in the first rank of plays produced in our history. In less expert hands, a musical with rapping versions of Hamilton, Jefferson, and Washington would be “Springtime for Hitler” wince-worthy. But Miranda connects dots that no one else saw, drawing a straight line from America’s revolutionary moment to the contemporary music and idioms of youthful rebellion. The effect is mesmerizing.

It is impossible to think of our founders merely as dead white males once you have seen them embodied by young black and brown ones. On stage nightly, Hamilton transfers ownership of America’s narrative and ideals to those whose grip on them has been fraught for more than two hundred years. And Miranda’s genius runs in both directions. Your parents and grandparents don’t like rap? They haven’t seen Hamilton.

There’s likely not a history or civics teacher in America who wouldn’t pay dearly to have her students see Hamilton. It’s harder, however, to account for education’s romance with Coates, whose book Between the World and Me won the National Book Award and is already widely assigned in high school English classes and required reading on college campuses.

The book, an extended letter to his son, is a powerful jeremiad; but his message seems hopeless, even nihilistic. Coates’s America is structurally and irredeemably racist, and our schools offer no sanctuary. “I came to see the streets and the schools as arms of the same beast,” he writes. “One enjoyed the official power of the state while the other enjoyed its implicit sanction. But fear and violence were the weaponry of both.”

It is possible to read that as a teacher and think your personal commitment to social justice exempts you from this withering indictment. Coates does not just reject this notion; he sneers at it.

It does not matter that the “intentions” of individual educators were noble. Forget about intentions. What any institution, or its agents, “intend” for you is secondary. No one directly proclaimed that schools were designed to sanctify failure and destruction. But a great number of educators spoke of “personal responsibility” in a country authored and sustained by a criminal irresponsibility. The point of this language of “intention” and “personal responsibility” is broad exoneration. Mistakes were made. Bodies were broken. People were enslaved. We meant well. We tried our best. “Good intention” is a hall pass through history, a sleeping pill that ensures the Dream.

“The Dream”—the American Dream—is where Miranda and Coates part company. One says to young people of color that it belongs to them; the other says that it’s a lie. Perhaps Coates would tell Miranda that his view of Hamilton as immigrant American everyman (“Hey yo, I’m just like my country/I’m young, scrappy, and hungry”) sheds no light on the black experience.

Perhaps, he might insist, immigrants are allowed to rise in America because they don't carry the weight of history on their shoulders the way African Americans do. Would Miranda, the son of immigrants, agree? Coates might criticize Hamilton for soft-pedaling slavery and holding a gauzy view of history; Miranda would likely point out that the subject of slavery comes up in the third line of the show.

Near the end of Hamilton, Miranda, in the title role, sings,

I wrote some notes at the beginning of a song someone will sing for me.
America, you great unfinished symphony, you sent for me.
You let me make a difference.
A place where even orphan immigrants
Can leave their fingerprints and rise up.

Hamilton’s unfinished symphony invokes the constitutional call to build a more perfect union. The belief in this possibility, and the effort to bring it about, is why many of us teach—particularly those of us who work exclusively with children of color. Thus, it stings to read Coates saying, in effect, “Don’t waste your time.”

Wittingly or not, his message to young people of color is that they have had the great misfortune to be born in a country that is determined only to break their black bodies.

Coates’s America is “Egypt without the possibility of the Exodus,” in David Brooks’ memorable phrase. “African American men are caught in a crushing logic, determined by the past, from which there is no escape.”

For teachers, to see America through the eyes of Ta-Nehisi Coates is to see ourselves as either the oppressor or the oppressor’s tool. No other outcome is acknowledged or offered.

For the moment, Miranda seems to have the upper hand in this argument. Hamilton is the toast of Broadway. Its praises are sung by AP U.S. History teachers, its lyrics sung from the backseats of minivans. Coates may have the last word with our students, though.

Works of genius endure. Ten or fifty years hence, Coates’s memoir will arrive in English class unchanged. By that time, Hamilton will be among the most performed high school musicals in America. Lin-Manuel Miranda’s music and lyrics will remain; but performed by a white cast of teenagers in an American suburban high school, as it inevitably will be, Hamilton will sacrifice a bit of the moment and the cultural context that makes it great.

It will be a challenge for Miranda to ensure that the enduring message of Hamilton survives when most of our children’s exposure to his transcendent show will be not on Broadway or iTunes, but onstage in high schools. Coates’s message will remain potent, persuasive, and uncut. Perhaps this makes him the greater genius. He works in a medium that only time can dilute. The best we can hope for is that he proves to be a poor prophet.

It is simply not my place to disagree with Coates. I have not lived a day outside of “the Dream” he derides. In the wake of Eric Garner, Tamir Rice, and too many others to catalogue, I have no choice but to accept that he has come honestly by his dim view of America.

But as a teacher, I do not have the luxury of withholding hope from our students on behalf of the United States—a country whose optimistic citizens built our schools and pay our salaries, but one that still has much to answer for. For now, at least we can say this: A diverse nation that produces a Ta-Nehisi Coates and a Lin-Manuel Miranda is one in which something is going very right.

For all the differences between these two geniuses, both Coates and Miranda deserve to be heard, pondered, and debated equally. I will hang my hope here: I want my students to read Between the World and Me. But I want them to believe Hamilton.

Editor's note: This post originally appeared in a slightly different form at the Seventy Four.