What teens want from their schools 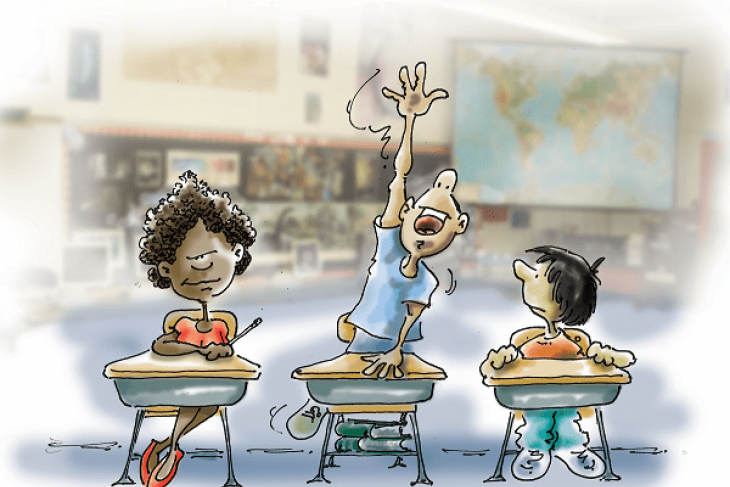 Boredom. We’ve all experienced it many times. Though we tend to think of it as unpleasant but endurable and harmless tedium, some research now suggests boredom may be harmful to our health—it is potentially linked to everything from weight gain, to depression, to physical pain—even to cheating on one’s spouse!

Boredom may exist in elementary or middle school, but it is endemic to high school. Indeed, it’s practically a rite of adolescent passage to profess one’s perennial state of ennui—as if no one or nothing is cool enough to sustain the interest of a sixteen-year-old.

What educators need to take seriously is the distinction between typical teenage whining and signs that students are actually disengaging from their formal education. Such disengagement is a portent of trouble, and not just because student engagement is closely linked to academic achievement.[i] Among high school students who consider dropping out, half cite lack of engagement with the school as a primary reason, and 42 percent report that they don’t see value in the schoolwork they are asked to do.[ii]

Teachers, of course, play a central role in engaging students in learning. A recent study showed that when students have a more engaging teacher, their attendance increases and their chances of completing high school improve. The authors found “engaging teachers are approximately as influential on high school completion as teachers who are highly effective at improving students’ test performance.” That’s a very important thing to know.

Yet teachers aren’t the only sources of increased—or diminished—student engagement. Other factors include the subject matter itself, particular instructional strategies, extracurricular activities and sports, peer groups, and a student’s intrinsic motivation to learn.

We wondered how much these various elements of the overall high school experience matter when it comes to engaging students. Common sense says not every student will be motivated to learn in the same ways. In a 2009 report, The New Teachers Project (TNTP) showed that teachers are not interchangeable “widgets.” Neither are kids. We wondered, then, if there was a way to characterize and quantify such differences for various types of students.

Which is exactly what we did, with the help of an ace research team headed by John Geraci, president and founder of Crux Research. John and his team surveyed a nationally representative sample of two thousand students in grades 10–12, exploring such topics as participants’ backgrounds and characteristics, school and classroom experiences, and overall educational preferences. We also embedded questions from engagement instruments developed by our expert advisors.

After calculating individuals’ scores on each set of items (or factors), we placed students into groups based on which factor they scored the highest. In this way, we identified their dominant, or primary, mode of engagement. Crux also convened several focus groups of high schoolers to hear more about what engaged them in school.

The result is our newest report, What Teens Want From Their Schools: A National Survey of High School Student Engagement. Here are the highlights:

Most high school students report being intrinsically motivated to learn. The vast majority (83 to 95 percent) report being motivated to apply themselves in school by thinking deeply, listening carefully, and completing assignments. In the student engagement literature, this is known as “cognitive engagement” and includes mostly internal behaviors such as asking yourself questions, figuring out where you went wrong, and going back over things that you don’t understand. It’s encouraging that most students report doing these things in school, for it’s unlikely that educators will maximize student potential if they don’t tap into pupils’ intrinsic motivation to learn.

In addition, many students report that teachers are central to their sense of connectedness and engagement in school; they highly value time with and connecting to peers; and they enjoy lessons and projects involving technology.

Beyond these welcome commonalities, however, we identified six subgroups of students with varying engagement profiles:

What does this all mean? We see three takeaways.

First, the vast majority of American high school students say they are trying hard and want to do their best in school. Somewhat counterintuitively, our results indicate that most high school students want to work hard in class and figure out things on their own if possible. They ask themselves questions, check their book or other materials when things don’t make sense, and try to pay attention to things they’re supposed to remember. Teachers should support and maximize this hard-wired desire on students’ part to think and reason autonomously—and policy types should be encouraged to see that even if we’re not satisfied with current levels of achievement, students seem to be willing to do better. It’s also heartening that the desire to learn and do well cuts across all types of students.

Second, distinct groups of students are primarily engaged in school through different levers. For some, the relationship with the teacher is key; for others, it is the subject matter or the social aspects of schooling. For still others, the level of engagement varies based on the extent that their emotional needs can be met in the classroom—or the extent that they actively participate in class. Tailoring schooling and instruction to such needs, preferences, and tendencies has the potential to pay dividends in greater engagement—and ultimately in achievement gains.

Third, engagement and choice go hand in hand. We’ve heard it a million times: A one-size-fits-all education system all but guarantees that some students will be left out—and eventually left behind. Both engagement and choice take many forms. In this case, choice does not have to be among schools (though more of that would surely help). It can also be among teachers, among courses, among delivery options, among instructional strategies, among programs, and among schools-within-schools.

The bottom line is this: To address the needs of students who are engaged in multiple ways, the supply side needs to offer choices at multiple levels that are genuinely different, not just multiple versions of essentially the same thing. What we’re recommending is a kind of customizing. That’s because student engagement and student choice—in all of their assorted forms—are truly two sides of the same coin.

[i] Lahaderne, “Attitudinal and Intellectual Correlates of Attention: A Study of Four Sixth-grade Classrooms,” Journal of Educational Psychology 59, no. 5 (October 1968), 320–324; E. Skinner et al., “What It Takes to Do Well in School and Whether I’ve Got It: A Process Model of Perceived Control and Children’s Engagement and Achievement in School,” Journal of Educational Psychology 82, no. 1 (1990), 22–32; J. Finn and D. Rock, “Academic Success among Students at Risk for School Failure,” Journal of Applied Psychology 82, no. 2 (1997), 221–234; and J. Bridgeland et al., The Silent Epidemic: Perspectives of High School Dropouts (Washington, D.C.: Civic Enterprises, LLC, March 2006), https://docs.gatesfoundation.org/documents/thesilentepidemic3-06final.p….

[ii] Ethan Yazzie-Mintz, “Charting the Path from Engagement to Achievement: A Report on the 2009 High School Survey of Student Engagement” (Bloomington, IN: Indiana University Center for Evaluation and Education Policy, 2010), http://www.wisconsinpbisnetwork.org/assets/files/2013%20Conference/Sess….