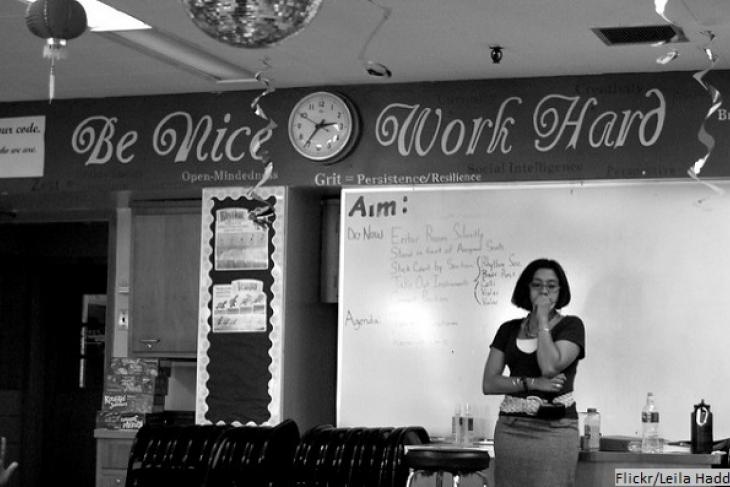 A few weeks ago, I argued that policy change is not the only path to education reform, floated five other approaches for improving educational practice, and promised to flesh them out in future posts. Here’s my attempt at the first of those five strategies, just in time for National Charter Schools Week: “Build a new system via charter schools, education savings accounts, or similar mechanisms” as an alternative to today’s traditional, ossified one.

What does that have to do with educational “practice”? Everything!

Our analysis shows that the system’s familiar arrangements for direct democratic control do indeed impose a distinctive structure on the educational choices of all the various participants—and that this structure tends to promote organizational characteristics that are ill suited to the effective performance of American public schools. This social outcome is the product of countless individual decisions, but it is not an outcome that any of the major players would want or intend if acting alone. It is truly a product of the system as a whole, an unintended consequence of the way the system works.

Our perspective also suggests that, absent new institutions, the problem of ineffective performance is likely to continue, however earnestly reformers may try to engineer effective school characteristics. These desirable properties of organization turn out to be largely incompatible with the way the system works.

This was prescient, coming as it did before the invention of charter schools, which are certainly
“new organizations” demonstrating that breakthrough performance is possible in a differently governed system.

Unfortunately, Chubb and Moe’s school choice “silver bullet” has done precious little to motivate the old, lumbering traditional public school bureaucracy to improve. We’re not really surprised; in Fordham’s recent study Is Detente Possible? District-charter school relations in four cities, Bryan Hassel and his team looked for examples of districts cooperating with and seeking to learn from charters. Even in the best-case scenarios, in places like Denver, the evidence was hard to find.

Perhaps it’s simply the “innovator’s dilemma”: Public school systems are the way they are because important constituencies are satisfied. They are open to change, but at a glacial pace, and only if it doesn’t upset the apple cart any time soon.

Charter schools, meanwhile, are classic start-ups. Without the burden of legacy costs, political baggage, and tired assumptions, they can pursue excellence with abandon. Not enough do, of course. But it’s impossible to look at the best charter networks up close and not see that their DNA is dramatically different from that of a traditional school system. Networks like KIPP, IDEA, and Success Academies obsess over doing everything better tomorrow than they did yesterday. I don’t know that anyone knows how to splice that DNA into school districts; maybe it’s impossible. So if we need phenomenal schools willing to constantly reflect on and improve their practice, let’s build the alternative system as quickly and thoughtfully as we can.

As I acknowledged earlier, expanding charter schools or other choice mechanisms certainly takes a lot of policy advocacy to get off the ground, often in the face of brutal political attacks. As Jeb Bush likes to say, and as we at the Fordham Institute know from our work in Ohio, “success is never final, and reform is never finished.” While almost all states now have charter laws, only a handful boast policies that promote quality at scale. The private school choice sector is smaller and even more tenuous. Schools in both sectors receive significantly less funding than their district school counterparts. There is much work to be done.

But great policies aren’t enough. Rick Hess was one of the first to argue this point, making the case for “ecosystems” that would nurture entrepreneurial efforts outside the traditional system (including a panoply of nonprofit as well as profit-seeking actors). You can see his influence in recent reports from Brookings, the National Alliance for Public Charter Schools, and Fordham, all of which examine the health of charters and/or choice in cities or states through a lens that is wider than policy alone.

So what are some of the key efforts and organizations that reformers can support when they aren’t fighting the advocacy fight?

In future posts, I’ll discuss other strategies for improving educational practice, including improving the leadership pipeline, spurring “disruptive innovations,” and working to identify “what works” and make it more likely to get adopted in schools.

But I can’t help but notice that all of these strategies are making deeper, faster inroads in the charter schools sector than in the old traditional public school system. Educational governance isn’t everything. But if change in practice is what you want, charters and choice may very well be the delivery system to get you there.