What options do students have in areas where private school choice proposals were defeated? 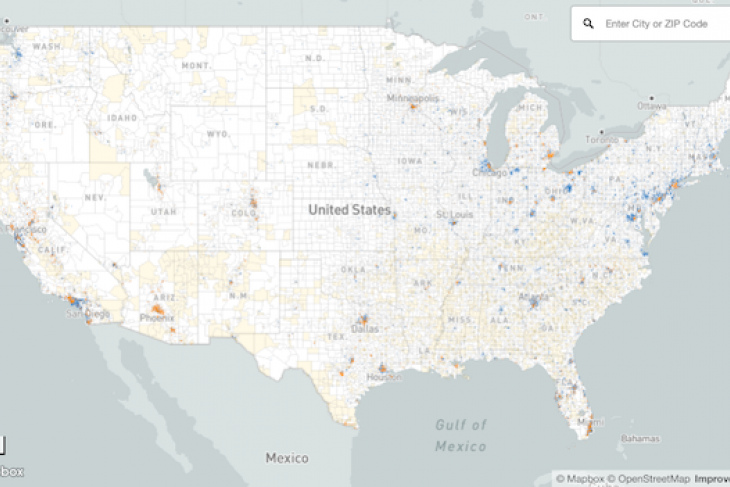 In recent years, new voucher or tax credit scholarship programs have been proposed in a few key states, only to face defeat. In deeply blue New York, a proposal for a tax credit scholarship program died in 2015 despite a diverse, bipartisan coalition of lawmakers and community activists—including the state’s Democrat governor—supporting the programs.

Meanwhile, in deeply red Texas, the Republican-controlled state Senate passed both a tax credit scholarship and an ESA for special needs students only to have the Republican-controlled House refuse to consider either bill. And in Colorado, local politics led to the demise of the Douglas County voucher program as voters elected several anti-voucher school board members in 2017.

To see how private school choice programs could have impacted these three jurisdictions had they been implemented, let’s take a look at our updated interactive map. It shows all of the public traditional and charter school elementary schools in the U.S. and was recently amended to include most private elementary schools too.[i] Our map also highlights (via tan shading) each city’s “charter school deserts,” aka high-poverty areas that lack charter schools. 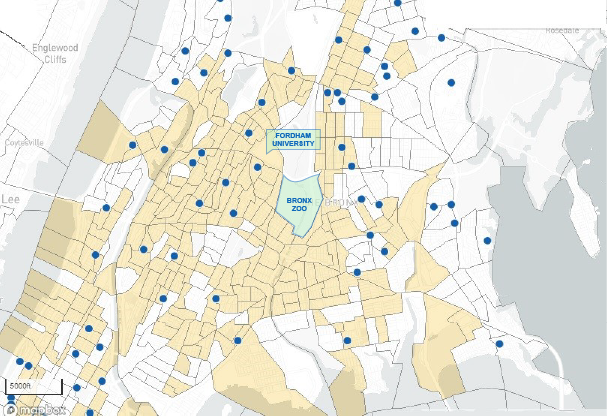 Rochester, New York is a city of considerable poverty, with a child poverty rate three times the national average. And unfortunately, the city boasts few schooling options for families other than the city’s traditional public schools. Private elementary schools appear to be particularly inaccessible to poor students, as they are primarily located in the city’s affluent suburbs. Just four private elementary schools—none of which has more than one hundred students enrolled—are located in the city’s high-poverty areas. 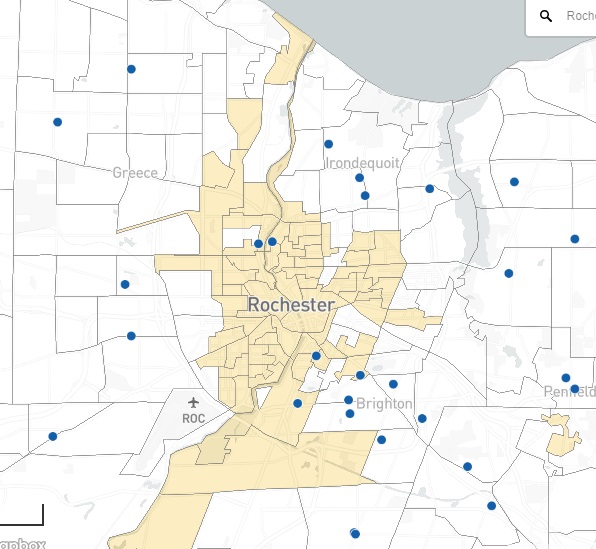 Dallas has large charter school deserts in Oak Cliff, south of downtown, as well as the high-poverty area around Fair Park and South Dallas. The city’s private schools are generally not located in those areas, but rather are concentrated in suburban and more affluent locales. Only a few, mostly religious private schools are located near the center of the city or in its charter school deserts. The one non-faith-based school serving those neighborhoods is the J. Erik Johnson Community School (recently renamed “Momentous School”), an elementary school founded by local business and community leaders and located in the Oak Cliff neighborhood. In short, poor communities, by and large, still have little access to private school options. 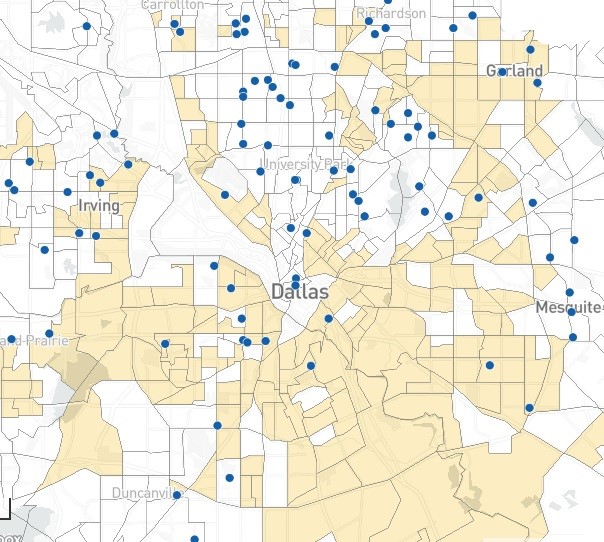 The country’s fourth largest city, Houston, is sprawling, and its charter school deserts sprawl as well. The largest concentration of private schools are clustered in affluent western and southwestern parts of the city, but some private schools in Houston are indeed serving high-poverty areas that lack charter schools. Resurrection Academy and Family Christian Academy, for instance, serve the poorer eastern part of the city, while Pueblos Royal Christian School is located in the high-poverty Pasadena area. The high-poverty area north of the I-16 loop is a true “school choice desert,” with virtually zero options beyond traditional public schools. 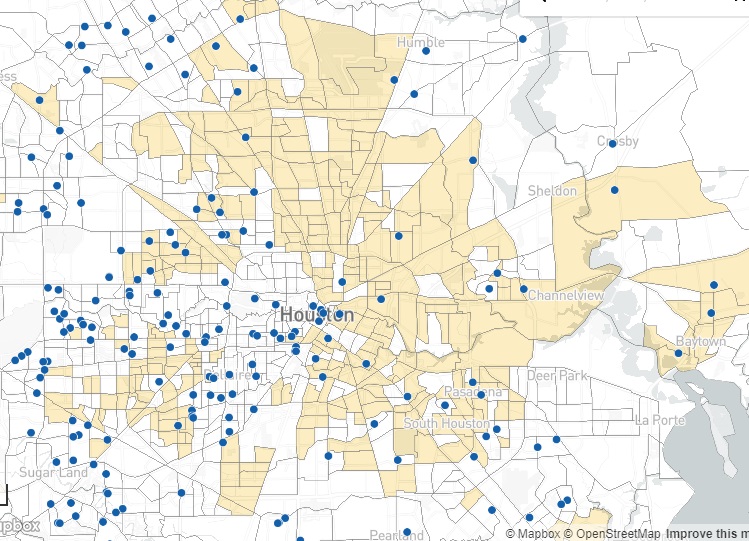 Denver is a relatively middle-class city that has a large and growing number of charter schools (with 20 percent of students enrolled in them), such that it lacks the giant charter school deserts seen in Houston, the Bronx, Dallas, and Rochester. While Denver’s private schools are largely clustered in the metro’s more affluent eastern part, a few dot the city’s charter school deserts. For example, three religious schools, St. Therese Catholic School, St. Pius X Catholic School, and Cedar Wood Christian Academy, are located in a higher-poverty Aurora suburb. And a few, such as St. Bernadette Catholic School and Redeemer Lutheran School, are also located in the poorer western part of the city. In contrast, the higher-poverty area north of downtown (around Martin Luther King Jr. Boulevard) boasts an assortment of both charter and private schools. 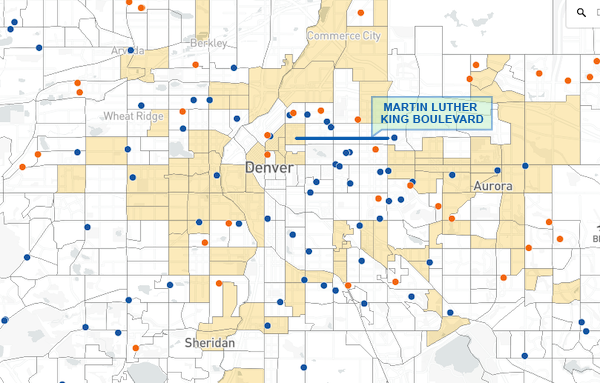 Although some private schools are indeed located in poorer locales in all three places, many more might choose to expand or locate anew if families there had choice programs in place to help them attend them. This is what we’ve seen in Florida—the state provides equitably funded scholarships and as more students enroll in the state’s voucher and tax credit scholarship programs, the number of private schools in Florida continues to grow, helping to create a plethora of educational options for Florida families.

To explore the locations of private, charter, and traditional public schools in your own community, click here.

[i] Unfortunately, not all private schools respond to the federal survey that we used (Private School Universe Survey), but a large majority of them are captured as of the 2015–16 academic year. According to the U.S. Department of Education, the response rate is 80.6 percent. We define “elementary school” broadly, including all schools serving students in any grade from kindergarten to fifth grade.