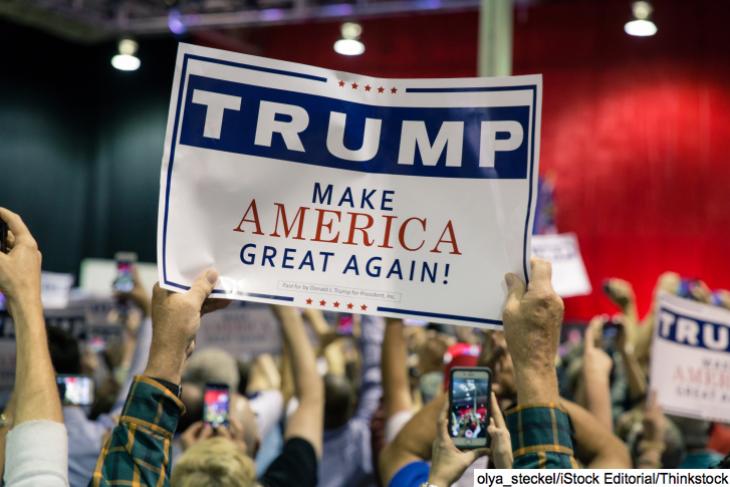 It’s said that failure is an orphan, but success has a thousand fathers. If that’s true, what conspiracy of malefactors do we have to thank for the oafish presidential candidacy of Donald Trump? Even as he continuously fails the tests of maturity, credibility, and good taste, the second-generation merchant landlord has proceeded from strength to strength in Republican primary polls (as he’ll be the first to tell you).

Some will attribute his rise to the anger of disaffected working-class whites or his near-monopoly of election press coverage, but these strike me as only offering proximate explanations. My own theory is a little more ethereal: Trump’s gravity-defying candidacy represents the predictable outburst of an electorate whose civic awareness has been all but hollowed out. Just think of the 2016 primary follies as the bill come due for our decades of failure in teaching American students the foundational concepts of their history and political system.

This failure has been abundantly publicized in recent months. April saw the release of the “Nation’s Report Card” for civics and American history (among other subjects). The results, as any number of panic-stricken reports made clear at the time, were abysmal: A pathetic 23 percent of eighth graders scored at or above “proficient” in civics, and only 18 percent did so in American history.

A pervasive ignorance about politics and government haunts our high school graduates as well. Whenever the Pew Research Center administers its regular survey of the public’s “news IQ,” they uncover baffling gaps in our awareness of the issues of the day. Recent versions of the quiz revealed that dishearteningly few respondents could identify the current partisan makeup of the Senate or the portion of the budget that the federal government spends on items like Social Security. As one might expect, this trend is even more pronounced in members of the millennial generation, who were only about half as likely as their Baby Boomer parents to pay close attention to politics and national affairs.

My point isn’t to shame uninformed citizens the way Jay Leno used to mock unfortunate bystanders on the sidewalks of Los Angeles. Believe me, I get it—life is long, Lincoln Chaffee’s presidential campaign was short, and we’ve got to get our kids to soccer practice. But we now have incontrovertible proof that our education system cannot impart knowledge of history and civics, as well as the routine demonstration of Americans’ obliviousness to world affairs. How can it be any surprise, therefore, that so many of us have been left vulnerable to the fantastical pronouncements of Donald Trump, many of which recall some of the ugliest episodes of our past?

To put it very simply: If you read in school about the grotesque internment of Japanese citizens during World War II (for which the federal government under President Reagan offered an official apology and billions of dollars in restitution), you’d be appalled by Trump’s equivocations on the practice. If you learned about America’s flatly anti-Semitic immigration quotas before that war, which helped trap thousands of future Holocaust victims in Hitler’s Europe, you would shudder at a leading presidential candidate demagoguing the humanitarian resettlement of Muslims fleeing violence today. And if you were taught to revere the First Amendment and its bedrock guarantee of religious liberty, you would condemn the cavalier suggestion that we close a few irksome houses of worship. The ideals at the heart of our political framework—freedom of conscience, limited government, equal protection—are repulsed by loose talk of shuttering mosques and rounding up undesirables.

It’s worth noting that our struggle to teach these ideals, as well as the historical figures and events that proved pivotal in their establishment, is nothing new. As early as seventy-five years ago, media commentators were lamenting teenagers’ inability to list the accomplishments of Andrew Jackson. (Which, in comparison with some of the NAEP U.S. history questions for our own high school seniors, actually seems like a fairly high bar to set.) But self-inflicted policy wounds have turned a perennial annoyance into something approaching a crisis.

With the advent of No Child Left Behind’s assessment and accountability measures, it was perhaps unavoidable that greater instructional time in the nation’s classrooms would be devoted to math and reading (the two areas that schools were required to test). Few anticipated, however, that this well-intentioned focus on “core subjects” would birth the Amazing Shrinking Curriculum. From an alarmed statement put out by the National Council for the Social Studies: “By requiring states to measure student achievement in language arts and mathematics and tying school performance reports and financial incentives to testing results, NCLB resulted in the diversion of both funding and class time away from social studies and other non-tested subjects.”

That redirection of precious academic resources came with a quantifiable cost. In a Center on Education Policy (CEP) study of 491 school districts around the country, it was found that 36 percent had cut teaching time that had previously been dedicated to social studies. The average decrease in time was seventy-six minutes per week, greater than the diminishment for any other subject. And almost fifteen years after the law’s passage, just nine states require the satisfactory completion of a civics exam as a condition for high school graduation.

That’s a mistake. The rudiments of responsible citizenship anywhere lie in a basic awareness of national customs, politics, and government. Deprived of this general background, voters are way more likely to fall for the policy-free ramblings of a man who promises to replace Obamacare with “something terrific.” With an impoverished understanding of executive powers and America’s posture toward its neighbors, they might similarly buy into the notion that a President Trump could simply mandate that Mexico helpfully pay for a partition along our southern border. To see through delusions like these, it takes sustained exposure to the ideas underlying our constitutional order.

If Americans aren’t getting that in schools, during the foundational years, when are they going to get it?

Editor’s note: This piece originally appeared in a slightly different form in the Daily News.