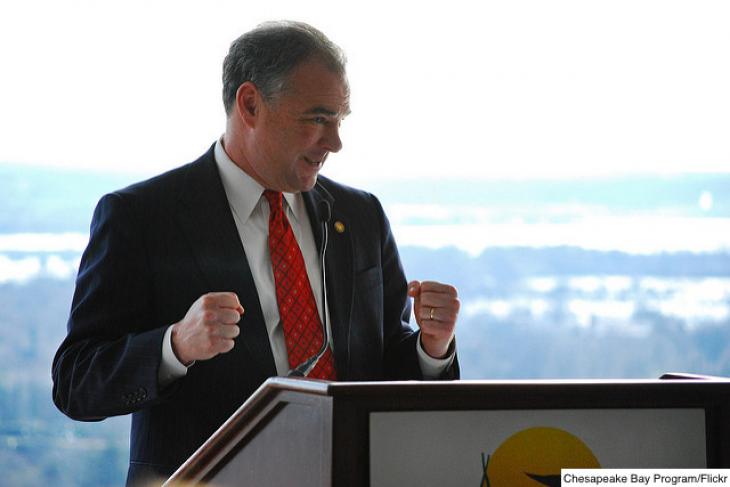 Tim Kaine, the junior United States senator from Virginia, is the Democratic Party’s vice presidential candidate, running alongside Hillary Clinton. The duo will face off in November against the Republication Party’s Donald Trump and Mike Pence and the Libertarian Party’s Gary Johnson and William Weld.

Education issues are familiar to Kaine. He was the governor of Virginia before becoming a U.S. senator, and his wife, Anne Holton, has served as Virginia’s secretary of education. Here are some of his views:

1. The Every Student Succeeds Act: “I’m pleased to report that Congress passed a bipartisan education reform bill in December 2015 called the Every Student Succeeds Act (ESSA). This bill replaces the long-expired and broken legislation known as No Child Left Behind. It will make changes that educators and families support, like decreasing the emphasis on standardized testing and giving states the flexibility to close achievement gaps.” July 2016.

4. Career and technical education: “[In the Senate] I co-founded the bipartisan Career and Technical Education (CTE) Caucus. From working in my dad’s ironworking and welding shop to teaching at a technical school in Honduras, I’ve always been a strong believer in the importance of high-quality CTE programs….I’ve also led efforts to include CTE in the Elementary and Secondary Education Act by including career and technical programs in the definition of ‘well-rounded education’ alongside math or science, supporting professional development for CTE teachers, and strengthening career counseling in schools.” July 2016.

5. Over-testing: “This over-testing phenomenon is particularly acute at the elementary level. Borrowing a phrase from Singapore’s educational reform efforts, I’d ‘teach less and learn more’ at the elementary level by focusing the early grades on English and math fluency. Use social studies and science material to stimulate curiosity about the world while building reading mastery and making basic math concepts more concrete. Save the state testing of science and social studies for later grades. If the early years are intensely focused on language and math, our students will perform better in all areas down the road.” December 2013.

6. Early childhood education: “Early childhood education works….The research is powerful—if you invest in high-quality programs that coordinate with K-12 curricula and have mandatory teacher standards, the gains from early education are lasting. It’s also important that we focus on coordinating investments made in early childhood programs—such as Head Start—to ensure we are effectively using our funding, eliminating any waste and bolstering the structure of our education system.” December 2013.

7. Keeping and attracting good teachers: “As I listen to public debate, it often sounds like our main issue is how to get rid of bad teachers. But this problem pales beside the larger issue of how to keep good teachers. Too many great prospective teachers never enter the profession and too many great teachers leave too early over low salaries, high-stakes testing pressure, discipline challenges, and an overall belief that society doesn’t value the profession. We need a robust debate about how to value and attract good teachers. December 2013.

8. College access: “We had to make some tough decision when I was [governor of Virginia] because it was the deepest recession since the 1930’s. But that didn’t stop us from…building more classrooms and facilities on our college campuses so more could go.” July 2016.

9. Education for students with special needs: “Most policy debate these days seems to be about charter schools or high-stakes testing. But I’m convinced that the most important reform has been under our noses since 1975, when legislation was passed to guarantee children with diagnosed disabilities receive individualized learning plans tailored to meet their specific needs.” December 2013.

10. Career exploration in middle school: “I’d reconceive middle school as fundamentally about career exploration. What do kids know about the work world beyond what their parents do? We can make middle school more exciting if we use all parts of the curriculum to expose students to the wide range of available career choices so that, by the time they enter high school, they will be more able to choose the right direction for themselves.” December 2013.