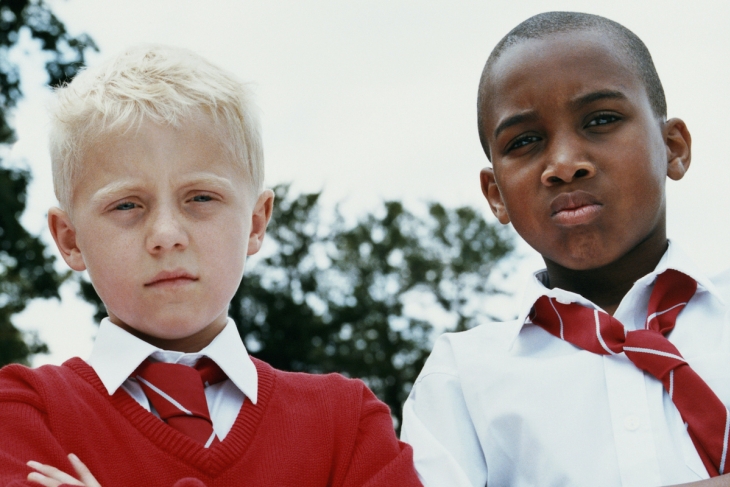 In the first semester of the 2019–20 school year, the San Diego Unified school district board discovered that 20 percent of Black students had received a D or F grade. In comparison, 7 percent of White students earned the same failing marks. School officials decided that the 13 percent racial disparity was a function of systemic racism, requiring an “honest reckoning as a school district.”

In October, that “reckoning” led the San Diego board to vote unanimously to “interrupt these discriminatory grading practices.” Rather than attempt to replicate the factors empowering the 80 percent of Black students who achieved passing grades, the board’s first action to “be an anti-racist school district” was to dumb down the grading system for all. Under the new protocols, all 106,000 San Diego students are no longer required to hand in their homework on time. Moreover, teachers are now prohibited from factoring a student’s classroom behavior when formulating an academic grade.

Goal should be excellence for all

Imagine how both Black and White students and faculty will internalize the not-so-subtle message of this lowered standard. A local TV station interviewed a White eleventh grade student who enthusiastically voted for these changes and explained why they were necessary for his disadvantaged peers: “...we are seeing that the inequities in our communities are so strong and it is not fair of us to put forth policies that only cater to the students that are able to meet these requirements.”

Read the mission statement of virtually any educational organization, and you will likely find earnest language seeking to attain “equity” by “closing the racial achievement gap.” Instead of seeking educational excellence for all, school reformers have become fixated on erasing disparities, most frequently the underperformance of Black children relative to their White classmates. The problem of course with this color-bound thinking is that achieving “equity” only allows a Black student to reach a average White peer’s potential, not his or her own—maybe higher—potential.

Consider that in 2019, only one third of all 8th grade students scored "Proficient" on the National Assessment of Progress in reading. In each year since the Nation’s Report Card was first administered in 1992, less than half of the nation’s White students in the fourth, eighth, and twelfth grades scored NAEP proficient in reading. The sad irony is that closing the Black-White achievement gap would mean Black student outcomes would grow from sub-mediocrity to full-mediocrity.

Despite these facts, school districts across the country are adopting the narrative that racial disparities in academic outcomes pose today’s greatest educational challenge. Such tunnel vision towards problems is usually accompanied by an equally narrow vision towards causality. These educators are reinforcing the flawed belief that every racial disparity must be due to white supremacy and systemic racism, regardless of other factors like declines in stable families or lack of school choice, which may play a far more powerful role in impeding the development of children of all races. The resulting “anti-racist” policies are becoming the unintended, modern day version of the soft bigotry of low expectations.

For the last decade, I ran a network of public charter schools in low-income communities in the heart of the South Bronx and Lower East Side of Manhattan. We were determined to ensure all young scholars, regardless of race, developed a faith in their ability to do hard things. Our goal was for students to believe in themselves, and not be swayed by the false rhetoric that any student of color would be incapable of handling basic requirements—like handing in homework on time—just because of their race.

The American dream is premised on the idea that a young person can become an agent of her or his own destiny. This can only happen if vital mediating institutions like strong families, schools and faith-based organizations demand excellence, and shape the character of this rising generation to build self-sufficiency and resilience. At this moment a growing number of young people are being led to believe that structural barriers around race, class and gender have rigged the system against them, and that they are powerless to compete at the highest level because of immutable characteristics like their race.

Early signs indicate that President-elect Biden and whomever his choice for Secretary of Education will likely prioritize the need to “advance racial equity.” But let’s not adopt “anti-racist” agendas that actually plant the seeds of White superiority and Black inferiority, instead of eliminating them. The antidote to racism is not anti-racism. It is a philosophy of humanism that celebrates and uplifts the inherent dignity in each individual. And the antidote to inequity is not diminished expectations for all. It is equal opportunity, and a belief in each person’s capacity for upward mobility, no matter their race, ethnicity or skin color.

Editor’s note: This article was first published by USA Today.