The slow but steady evolution of teacher retirement plans 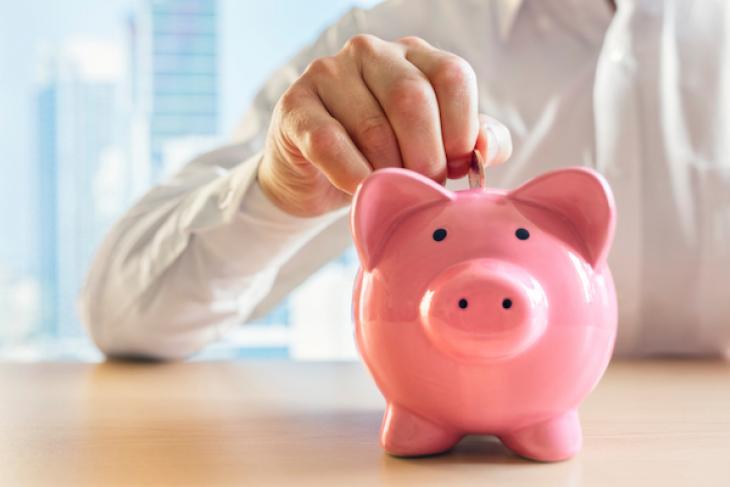 We're going to have to update a talking point. Those of us working in the pension world have long used the shorthand that “nine out of ten teachers” participate in a defined benefit pension plan. But on further look, that’s not quite right, and it’s changing faster than commonly recognized.

Like any good talking point, it has some kernel of truth. The stat comes from the Bureau of Labor Statistics (BLS), and as of March of 2016 the BLS reported that 87 percent of “Primary, secondary, and special education school teachers” employed by state or local governments participate in defined benefit pension plans (Table 2 here). We could round up that figure and call it a day, but it’s worth digging deeper.

The BLS has tracked retirement benefits of state and local government employees since 1987, and the longer trend line has some interesting nuance. Back then, the BLS only reported a broad category of “teachers” that included all personnel in primary and secondary schools, plus those employed by state colleges and universities. If we follow this broader category of “teachers” over time, here’s the percentage that participated in a defined benefit pension plan by year:

That’s a 19-percentage-point decline in twenty-nine years. That’s much different than the conventional narrative, and it may even be under-selling things a bit, since existing employees are typically allowed to keep their benefits even as new employees are enrolled in something different.

So what’s driving this change? Beginning in the year 2007, the BLS began disaggregating the data by type of employer, and it became clear that “junior colleges, colleges, and universities” were responsible for a big part of the fall in the larger “teacher” category. In 2007, 68 percent of employees at public colleges and universities participated in a defined benefit plan, and that number fell to 62 percent in 2016.

This decline is noteworthy in itself, but it also suggests a growing divergence in the retirement plans offered to employees working in public K–12 schools and those working in public colleges and universities.

But even if we focus on K–12 schools, there’s movement there as well, although not as much. In 2007, the BLS reported that 94 percent of K–12 teachers participated in a defined benefit plan. But by 2016, that number had fallen to 87 percent.

Slowly but surely, more and more states are making changes to their teacher retirement plans.

But which states? To illustrate this, the timeline depicted in the graphic below charts major teacher pension reform legislation over the last two and a half decades. While the majority of teachers are still enrolled in defined benefit (DB) pension plans, other options have emerged, including:

The timeline below shows the adoption of alternative teacher retirement plans. Washington was an early outlier, adopting a hybrid plan in 1995. From 2001 to 2005, in the wake of the dot-com bubble, five more states made changes: South Carolina, Ohio, and Florida created DC options; Oregon switched to a hybrid plan; and Alaska, notably, began enrolling all new teachers in a DC plan in 2005. After a pause, reform picked up again in 2010, with both Virginia and Michigan adding hybrid plans—though Virginia introduced it as an option, while Michigan defaulted all new hires into the system. Five more states made changes soon after, with Indiana, Rhode Island, Utah, and Tennessee offering up alternatives. Most recently, in 2017, Pennsylvania, Michigan, and Florida made changes. Both Michigan and Florida switched to default DC plans, while Pennsylvania adopted a hybrid plan alongside a DC option.

Though the majority of states still enroll their teachers in traditional defined benefit systems, we’ve seen an uptick in states moving toward alternative plans. As more and more new teachers enter the workforce in those states, and as other states follow the early adopters, we’ll see higher and higher percentages of teachers enrolled in alternative retirement plans. These options will be a financial win for state and school budgets, while still offering teachers a secure retirement as well as greater portability. Our talking point needs to change, because progress is happening. 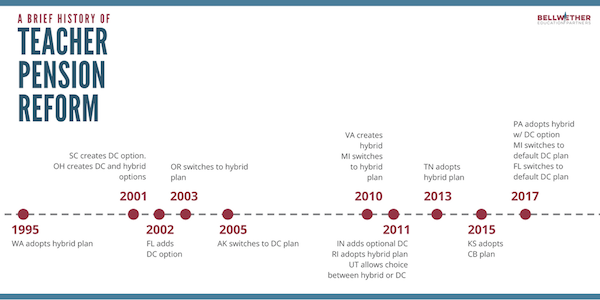 *Note: We attempted to look every ten years, but the data weren’t collected in 1997, and haven’t been released for 2017 yet.