Public schools don't have a monopoly on creating good citizens 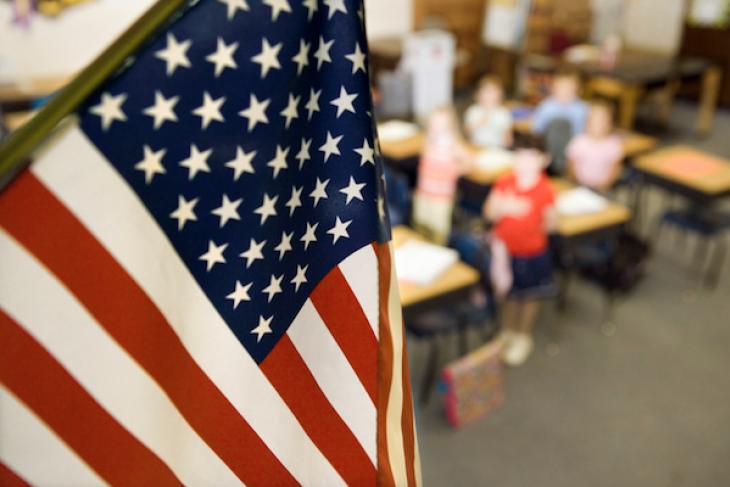 In an essay in the new issue of The Atlantic, titled “Americans Have Given Up on Public Schools. That’s a Mistake,” Erika Christakis frets over the “dystopian narrative” that she says dominates conversations about public schools, which she insists are “nothing close to the cesspools portrayed by political hyperbole.” Her complaint refers not only to the disdain for public education expressed by President Trump and education secretary Betsy DeVos. But, she notes, “Their words and proposals have brought to a boil something that’s been simmering for a while—the denigration of our public schools, and a growing neglect of their role as an incubator of citizens.”

Christakis is a well-regarded expert on early childhood education and the author, most recently, of The Importance of Being Little (2015), which pushed back aggressively against the vision of preschool as preparation for academics, and in favor of discovery learning and play. It may, however, be her fate to be best remembered for the email she wrote two years ago while a guest lecturer at Yale, wherein she challenged students to decide for themselves what Halloween costumes to wear over the advice of college administrators who were warning them against “cultural appropriation”—donning costumes like feathered headdresses or turbans. “Is there no room anymore for a child or young person to be a little bit obnoxious,” she wrote, “a little bit inappropriate or provocative or, yes, offensive?”

There was no room, at least not at Yale, either for her sensible advice or her services. Her email triggered wild, emotional overreactions from the students with whom she empathized; she quietly left the university within the year. In short, if anyone has earned the right to sound alarms over the collapse of civil discourse, it’s Erika Christakis.

We have come to see schooling “less as a public good, like a strong military or a noncorrupt judiciary, than as a private consumable,” she writes in The Atlantic, and here Christakis is unimpeachably correct. I have made the same argument myself many times over the years. She continues:

“I am more concerned with how the current discussion has ignored public schools’ victories, while also detracting from their civic role. Our public-education system is about much more than personal achievement; it is about preparing people to work together to advance not just themselves but society. Unfortunately, the current debate’s focus on individual rights and choices has distracted many politicians and policy makers from a key stakeholder: our nation as a whole. As a result, a cynicism has taken root that suggests there is no hope for public education. This is demonstrably false. It’s also dangerous.”

Well, no. It seems to me demonstrably false (others can debate whether it’s dangerous) to suggest that traditional public schools have special powers to advance and defend civic virtue. The proof point is our current debased and divisive national discourse, which is conducted daily with rising intemperance by American adults, nearly all whom attended the traditional public schools that Christakis, in my view, sentimentalizes. If civic virtue and a shared commitment to the common good are primary objects of schooling—and I agree that they should be—a strong case can be made that school choice helps, not hinders that mission. Christakis is nostalgic for a time that never was. A growing body of evidence suggests that private schools generally, and Catholic schools in particular, are often better at promoting civic participation and political tolerance than public schools.

“Hyper-individualism isn't only a problem in education. It’s also a problem of American culture, broadly speaking, and one which Alexis deTocqueville highlighted in the 1830s,” observes Ashley Berner, Assistant Professor at Johns Hopkins University and the deputy director of its Institute for Education Policy. Berner’s recent book, Pluralism and American Public Education: No One Way to School (2017) detailed several “mistaken beliefs” about American education, the first of which is “that only state schools can create good citizens.” The evidence mustered by Berner suggests this is simply not so.

The question Christakis’s piece raises—how to structure education such that it pushes toward the common good—is an excellent one. But the answer doesn't seem to be a uniform-school system, delivered exclusively by the State. “Domestic and international research suggest,” notes Berner, “that schools with positive, distinctive cultures, whether religious, philosophical, or pedagogical, have a greater chance of cultivating civic behaviors and sensibilities.” Indeed, America is an outlier in conflating “public education” with uniform, government-operated schools. In most democracies “public education” simply means that government funds and regulates, but does not necessarily operate, a wide variety of schools.

Christakis’s essay more successfully faults the reductive view of education and disregard for the civic function of schools that are all too evident in the writings and utterances of most of us in education reform. “Surely it’s reasonable to ask whether some of America’s success might derive not from factors measured by standardized tests, but from other attributes of our educational system,” she writes. “U.S. public schools, at their best, have encouraged a unique mixing of diverse people, and produced an exceptionally innovative and industrious citizenry.”

My reform credentials are, I hope, in good order, but I share Christakis’s concern, tacitly expressed here. A blind spot in our technocratic impulse to improve outcomes (read: boost test scores) is that we forget that schools are also civic institutions where children go to become Americans. But it is simply not true—and it never has been true—that district-operated schools are indispensible vehicles for inducting children into civil society.

What we should want for our children is for them to develop an emotional stake and a sense of attachment to civil society because they sense that society is invested in them. The number of institutions that potentially forge links in this chain—public, private, and personal—is vast, spanning families, churches, scout troops, Little League, police departments, the armed services, and countless others. Schools are an important link, possibly the dominant one, in this chain. But under whose roof children go to school matters less than what occurs inside. If the education we provide to our children does not increase their store of civic-mindedness and fellow feeling, if it does not leave them with a deep attachment to this country and its ideals, it will not mean that they didn’t attend public school. It will mean that they got a lousy education.