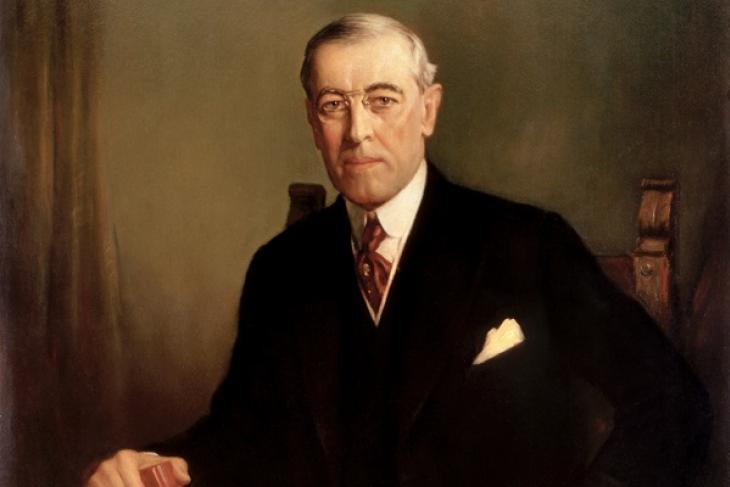 Princeton University announced last week that it would preserve the name of Woodrow Wilson on several buildings and programs, though it had plenty of reasons to do otherwise. In his years leading the university and, later, the United States, Wilson acted as a vehicle for racist impulses that right-thinking people now find abhorrent. Outraged undergraduates, marinated in the activist pique so prevalent on American campuses, walked out of class this fall in protest against what they deemed maltreatment of minority students. A handful staged a sit-in in the office of the school’s current president, Christopher Eisgruber, who responded by pledging to study the issue of Wilson’s legacy. By November, the call for change was being echoed in the New York Times editorial page.

Ultimately, it went unheeded. The special committee assembled by Princeton’s trustees to decide the issue recommended against expunging Wilson’s name from a residence hall and the famed school of international relations. Instead, the university will initiate an effort to diversify campus art, encourage more minority students to pursue graduate degrees, and explore the truth of the former president’s impact on American life. His presence at Princeton is secure, at least for now.

The drive to modify or eliminate structures, monuments, scholarships, and mascots named after historically vexed figures (or, in at least one case, a seemingly pristine figure whose last name happens to be “Lynch”) strikes me mostly as a product of undergraduate distemper. But the dispute at Princeton holds some important lessons for those of us focused on the K–12 realm. A huge number of Americans (particularly those above a certain age; more on that in a moment), at some point during their years as students, attended a school named for a person of national import. Simply by being fallible men and women who lived under different circumstances than our own, those namesakes are bound to eventually stir up trouble for their inheritors. But they also offer us a real opportunity for self-examination and civic education.

First, I should explain my caveat about Americans of a certain age. We now know that, over the last half-century, it has become less and less likely for schools to be named after actual people, as opposed to animals, cities or counties, or other geographical identifiers. A much-circulated 2007 paper from the Manhattan Institute looked at naming conventions in seven states, accounting for approximately one-fifth of American students, and came up with some amusing statistics: Arizona public schools are nearly fifty times more likely to commemorate objects from the natural world, such as mesas or cacti, than a U.S. president; more schools in Florida are named after sea cows than George Washington.

The paper is a bit of a lark. Nobody, including its authors, actually thinks that these trends have wrought a benighted epoch of social ignorance among American schoolchildren. (That reality, which has already arrived, clearly has more to do with the mediocrity of this country’s schools than the irresistible ascent of the sea cow.) But let’s acknowledge that we’re living through a moment of historical reappraisal when it comes to our national institutions—whom to name schools after, put on the ten-dollar bill, and the like. Cranky galoots like me can shake our fists about that, but it would be far more helpful to use this political vogue for educational ends.

By reexamining the individuals whose names now rudely encroach upon our reverie of historical solipsism, we can resurrect the forces and conflicts that shaped their times—and use them as a mirror on our own. As my colleague Robert Pondiscio put it last year, when a tempest was brewing over parks and monuments named after leaders of the Confederacy: “Students might learn something…that will create a sense of pride or discomfort. At the very least, it will provide a first-rate lesson in history, civics and democratic processes to an education system where both are in short supply.”

I think that’s what Princeton has gained, more or less. Granted, they were dealing with a homegrown hero (and one, it bears noting, whose own dishonorable history on race couldn’t begin to compare with those of Jefferson Davis and Robert E. Lee.) Nevertheless, it took the protestors seriously by soliciting public comment and reaching out to Pulitzer Prize-winning scholars of Wilson’s era. It is not a public middle school—its existence, in fact, predates public education as we understand it today—and this question was never going to be settled with a showing of hands in the gymnasium. The trustees were, of course, lampooned by some of their original detractors. But they showed wisdom in moving deliberately, inviting the community into the discussion, and leaving the door open to future introspection.

Compare that to the move by George Mason University to sell the naming rights to its law school—now the “Antonin Scalia Law School,” since its first version ran afoul of a truly hilarious acronym malfunction—as if it were a football stadium. The recently deceased Scalia, whose conservative admirers are busily apotheosizing, left an extraordinarily rich and contested imprint on American jurisprudence. In other words, he’s probably the ideal candidate to launch a Princeton-style conversation on institutional values and personal character. Instead, for the low, low price of $30 million, the Koch brothers and an unnamed pal made an end-run around students, faculty, and alumni. The school is already a favorite among conservatives, and a dialogue that drew in all concerned parties might well have yielded Scalia (or some other conservative jurist, such as William Rehnquist) as a suitable figure to honor. Instead, by treating the process as if it didn’t matter, the school simply cheapened its own identity.

There are fifty-two schools in twenty-one states (and Puerto Rico!) named after Woodrow Wilson. The one closest to Fordham is Washington, D.C.’s Woodrow Wilson High School, which graduated both gazillionaire investor Warren Buffett and punk legend Ian MacKaye. Located as it is in a hyper-politicized city, some wondered if the school’s administrators were reading the headlines about Princeton and mulling a change. They’re not, according to Mayor Muriel Bowser and Chancellor Kaya Henderson; the age of political revisionism, it seems, has not yet reached our secondary schools.

Notably, however, the city is considering a new title for an entirely different location—Frank W. Ballou Senior High School in Southeast. Christened in honor of a longtime superintendent from nearly a century ago, the school has gained some fame in recent decades for its music program. Now local officials hope to rename it after a cherished public servant, a man of unblemished integrity and utterly blameless personal qualities: Former Mayor Marion Barry.

I sincerely hope they’re willing to debate that one.