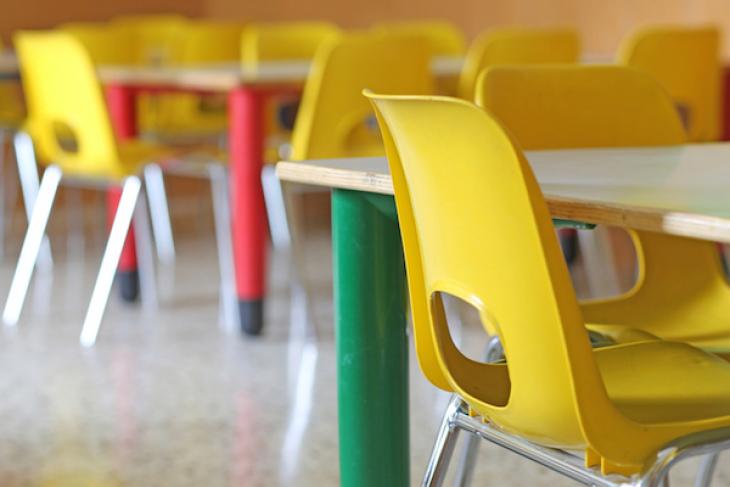 In a searing exposé, reminiscent of Upton Sinclair and the heyday of journalistic muckraking, the Houston Chronicle has assembled persuasive evidence that Texas has placed a de facto cap of 8.5 percent on the number of kids who can be placed in special education. Assuming it’s true—state officials seemed to waffle, fiddle, and redefine when asked tough questions by the reporter—this would go a long way toward explaining why the Lone Star State has for years had a rate of special-ed placements below just about everyplace else in the union, and far below a handful of jurisdictions (such as Massachusetts) that are pushing 20 percent. The national figure is about 13 percent, but the state-to-state variability is wide—although Texas, along with California and a handful of others, has long been a low-end outlier. 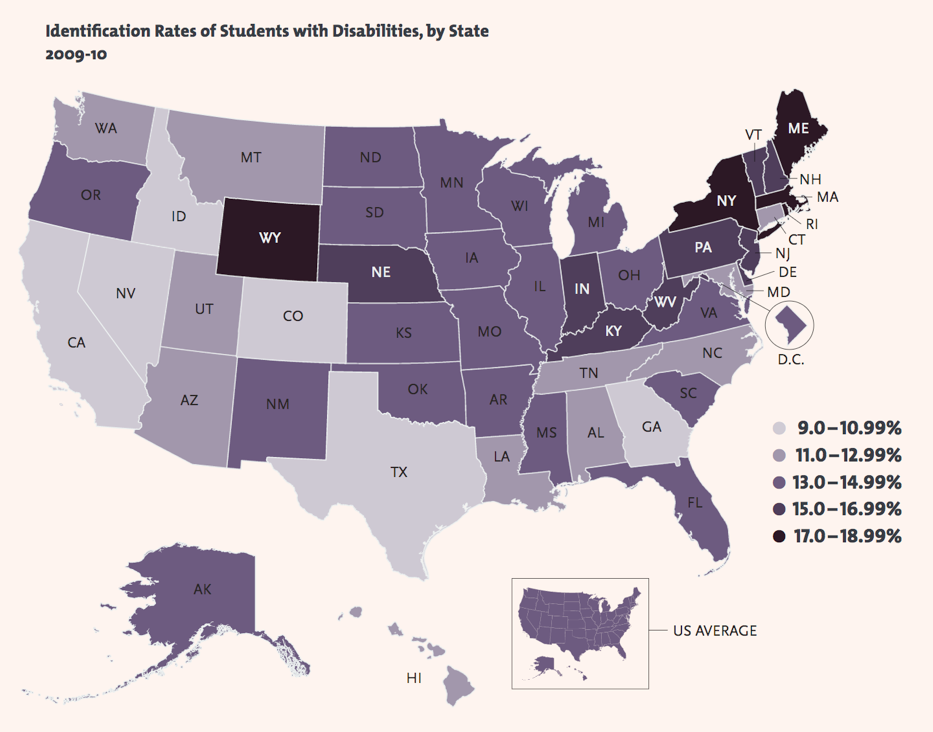 The protestations, lamentations, and handwringing that swiftly followed were to be expected—Matt Ladner weighed in (on Jay Greene’s blog) within hours, for example, terming Texas “nothing short of disgraceful” and urging that it try Florida-style special-ed vouchers—and the feds will surely look into whether Texas has violated the Individuals with Disabilities Education Act (IDEA), versions of which have been on the law books since Gerald Ford (with misgivings) signed the first such measure in 1975.

Assuming that kids don’t differ all that much from Boston to Austin, one may fairly wonder what accounts for the big discrepancies—and there’s no doubt that state and local implementation practices must account for a lot.

A child typically qualifies for special education placement upon being “referred” by a teacher or petitioned by a parent, and then evaluated for evidence of disabilities by people—mainly psychologists—who are presumed to know what they’re looking for. Once brought into the special-ed system, children qualify for all manner of extra services and accommodations, and parents gain all sorts of rights and prerogatives with regard to their children’s education that other families don’t have—most of which add to school-system costs.

It’s no secret that, from the standpoint of state and district education budgets, special ed is expensive, often accounting for a quarter (or more) of their entire K–12 operating outlays. Although the historical record indicates that Uncle Sam once committed to cover the extra cost (estimated at an additional 40 percent of regular per-pupil funding per disabled student), except for a brief windfall in 2009, the actual federal appropriation has been more like 17 or 18 percent. The estimated federal shortfall in fiscal 2014 was $17 billion—costs that end up being borne by states and districts. Because special ed, once conferred on a child is, in essence, a civil right, those jurisdictions don’t have a lot of choice in the matter.

Although, as Nathan Levenson showed in a 2012 Fordham report, savvy districts can take steps to make their special-ed programs both more effective and more cost-efficient, it’s understandable why a state or district might want to keep the number of special education students within bounds. It’s equally understandable why parents of youngsters who face behavioral, physical, or learning challenges in school—parents such as those profiled in the Chronicle—will move heaven and earth to get their daughters and sons the added services, assistance, and considerations that come with special ed. One can hardly blame them.

How many children belong in special education is a question with no definitive answer. The Chronicle cited a recent Centers for Disease Control (CDC) estimate that 15.4 percent of young children have been diagnosed by doctors as having “a mental, behavioral, or developmental disorder.” Back when IDEA’s antecedent was enacted, policymakers expected the take-up rate to be around 6 percent. The federal financial contribution is supposed to plateau at 12 percent. But the percentage gradually crept up to almost 14 percent by 2005 as more and more youngsters were referred on one basis or another, especially under the broad and rather nebulous heading of “learning disabilities.” It’s declined a bit since then—and one must wonder how much of that decline is due to Texas intentionally cutting its special-ed numbers.

Those bases for referral, however, are often subjective and discretionary—one reason that state special education rates are so discrepant—and in some cases (beyond the most conspicuous, indeed unarguable, physical, mental, and emotional disabilities) referrals to special ed may fairly be questioned. When they’re based on “behavioral” issues, it’s no secret that many a teacher would just as soon rid her classroom of that kid who keeps acting up. When they’re based on “learning” issues, a typical diagnosis is based on test-derived discrepancies between a child’s ability and his or her achievement. Yet how to know whether an achievement shortfall is due to something inherent in the child? As former NIH executive Reid Lyon—the moving force behind the National Reading Panel in 2000—once wrote, many kids diagnosed as “learning disabled” are actually “teaching disabled.” Because nobody ever taught them to read properly, they naturally fare poorly on gauges of academic success that rely on their reading prowess. Does that mean they need special ed—or better reading teachers in the early grades?

It’s also no secret, unfortunately, that more than a few parents, having learned of the extra attention and accommodations that special education students get—such as extra time to take college-entrance tests!—have pushed hard to get their youngsters so identified. And it’s even less of a secret that more than a few psychologists and attorneys have earned a nice living by helping parents advance these demands upon the school system.

This is akin to pharmaceutical companies that appear to dream up new ailments that their pricey miracle drugs might cure—ailments that people sometimes didn’t even know they had until they learned about them on TV or the Internet. There’s public money out there to capture, after all, and when all is said and done special ed is essentially an entitlement.

None of which is to dismiss the legitimate claims of youngsters with true disabilities to some extra help with their schoolwork, and I do not doubt that the Houston Chronicle (like other investigators), had it kept digging, would have come up with more heartstring-tugging instances of arbitrary and wrongful denial of special education services.

If you train a different lens upon all this, however, you realize that you’re looking at a badly messed-up system, one that privileges some kids over others, that extends rights to some citizens that others don’t have, that invites finagling by both seekers and suppliers of education services (and countless intermediaries), and that ends up being costlier than it needs to be, not to mention sitting substantially beyond the reach of policymakers tasked with apportioning scarce education dollars across multiple legitimate causes, needs, and priorities.

It’s also, in my view, an antiquated system that’s long overdue for a thoroughgoing overhaul. At a time when, assisted by many new technologies, the concept of “personalized learning” for every child is on the agenda of many educators and philanthropists (not least Mark Zuckerberg), why do we persist in personalizing the educational experiences of some kids while batch-processing everybody else? At a time when other federal and state policies are focused on achievement, school results, and the narrowing of learning gaps, why do we carve out a huge subpart of K–12 education for a program that’s still centered on inputs and services? At a time when revving the engines of upward mobility is among the great domestic challenges that America faces, why do we continue with practices that are especially susceptible to manipulation by canny upper-middle-class families pursuing advantages for their own children as well as by just about everyone else who in some way benefits from the maintenance and expansion of the current arrangement? Almost nobody wants out of this system—well, a handful of charter-school parents don’t want their kids “identified”—and just about everyone except the taxpayer gains from its continued growth. (To be clear, while teachers may benefit from getting those troublesome kids into somebody else’s classrooms, when kids with IEPs are “mainstreamed” into their own classes, there’s a ton of unwanted paperwork.)

Though many states have special education laws of their own—a few of them as innovative as Florida’s McKay Scholarship Program—and other federal statutes also influence how society does (and doesn’t) treat disabled individuals, both in school and beyond, the principal policy engine in the K–12 realm remains the federal IDEA statute, which has not been reauthorized since 2004 and—as many others have noted—is due for a top-to-bottom review.

Which I fear it isn’t going to get because everybody is scared to touch special education, much less fundamentally alter it. Elected officials do not want to be accosted by the angry parents of kids with (or whose parents are sure they have) disabilities. Nobody wants pictures of plaintive children in wheelchairs to appear on TV or YouTube. Everybody is super worried about autism and ADHD (radically over-diagnosed though the latter appears to be—with pharmaceutical companies again minting money from it). Multiple adult interests now benefit from keeping special ed the way it is—and continuing to expand it. Insofar as policy analysts, academics, and think tanks pay any attention to the topic, they almost always do so within the fundamental structures and parameters of the forty-plus-year-old policy regime that was inaugurated with President Ford’s signature. Nobody wants to get outside this box nowadays, not even the kinds of private funders that generally support fresh education-policy thinking.

Fordham (and the Progressive Policy Institute in the days when Andy Rotherham was there) tackled this in a big way back in 2001. A federal commission did much the same the following year. Since then, there have been sundry efforts to ensure that kids with disabilities—and their schools—are subject to the accountability expectations of NCLB and, most recently, ESSA. This has not gone well, however, and such issues as how to accommodate these students on state assessments—and which among them to excuse from those assessments—have been big, sore, contentious issues. Yet fresh thinking about the fundamentals of special ed has taken place in the past decade, save for the indefatigable Miriam Kurtzig Freedman, whose forthcoming book, Special Education 2.0: Breaking Taboos to Build a New Education Law, will outline a new way forward.

It would be nice to think that Congress might eventually steel itself to tackle the rethink that IDEA needs, as it finally did with ESEA/NCLB. But I’m not holding my breath.

Meanwhile, two cheers for the Houston Chronicle for surfacing this problem in Texas—but let’s also choke out a word of understanding for Texas for trying, however clumsily, even in some ways cruelly, to live with a federal law that isn’t working at all the way it should but that nobody seems ready to fix.