Ohio’s report card release showed a slight narrowing of the “honesty gap”—the difference between the state’s own proficiency rate and proficiency rates as defined by the National Assessment of Educational Progress (NAEP). The NAEP proficiency standard has been long considered stringent—and one that can be tied to college and career readiness. When states report inflated state proficiency rates relative to NAEP, they may label their students “proficient” but they overstate to the public the number of students who are meeting high academic standards.

The chart below displays Ohio’s three-year trend in proficiency on fourth and eighth grade math and reading exams, compared to the fraction of Buckeye students who met proficiency on the latest round of NAEP. The red arrows show the disparity between NAEP proficiency and the 2015-16 state proficiency rates. 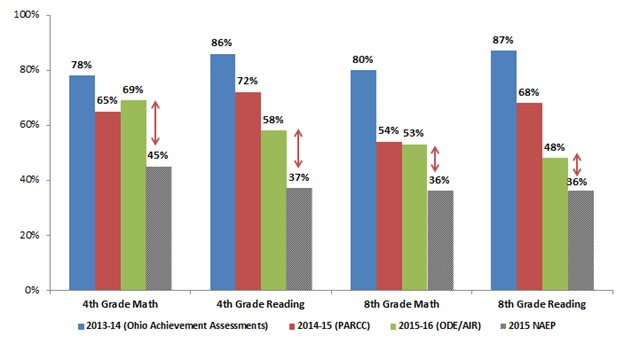 As you can see, Ohio narrowed its honesty gap by lifting its proficiency standard significantly in 2014-15 with the replacement of the Ohio Achievement Assessments and its implementation of PARCC. (The higher PARCC standards meant lower proficiency rates.) Although Ohio did not continue with the PARCC assessments, the chart above indicates that Ohio continued to raise its proficiency benchmarks on its new reading exams (AIR/ODE developed). Math proficiency, however, remained virtually unchanged in these grades from 2014-15 to 2015-16.

Despite the frustration that some schools are expressing, Ohio policy makers should be commended for continuing to raise standards in 2015-16. Parents and citizens are now getting a much clearer picture of where students stand relative to rigorous academic goals.