Holding schools accountable for student growth in a rigorous manner that doesn’t systemically favor one school over another is a vital policy objective. To this end, the Buckeye State has implemented a sophisticated (though not easily understood) value-added model to rate schools by their impact on student growth over time, while ostensibly holding constant other factors that could impact growth.

In this post, I look at the changes that Ohio has made in its value-added system, and what the distribution of the state’s value-added output looks like across schools under these revisions.

This year Ohio made several changes to the state’s value-added system. Previously, Ohio reported a 1-year value-added index score for schools and districts. This lead to some head-scratching results (see our 2010 analysis of the year-to-year “yo-yo” effect). Evidently, to mitigate this problem, the state reported a 3-year composite average—2010-11 to 2012-13—for schools’ overall value-added scores. In addition, the state reported for the first time value-added scores for three subgroups of students: those identified as gifted, special education and those in the bottom 20 percent in achievement statewide.  The subgroup value-adds are 1-year index scores.[1]

Meanwhile, Ohio issued, for the first time, A-F letter grades along these four dimensions of a school’s value-added performance. As such, the state has changed how it converts the numerical value-added scores into categorical ratings. The state publishes the categorical ratings on a school’s Report Card and they are part of the method by which Ohio determines sanctions against low-performing schools (e.g., whether students in a public school become EdChoice voucher eligible or for automatic charter school closure).

Under Ohio’s old system, there were three rating categories. Now, under the state’s new A-F letter grading system, there are five categories. The table below shows the conversion of school’s index scores under the two rating systems (Ohio Administrative Code 3301-28-06 establishes the new criteria). The old “met” category has effectively been sliced into three categories (B to D). The new rating categories apply to both a school’s overall value-added grade and to its subgroups ratings.

Charts 1A and 1B display the distributions of scores and letter grades for Ohio’s 2,565 schools which received an “overall” value-added score in 2012-13. Schools that contain only grades 9-12 and K-3 do not receive scores, since value-added only applies to grades 4-8. Chart 1A shows that school-level value-added scores form the classic “bell curve.”[2] The distribution, however, is shifted slightly to the right of zero, and the mean is nearly 1. The range of scores is fairly wide—the lowest index score was -27 and the highest was +21. 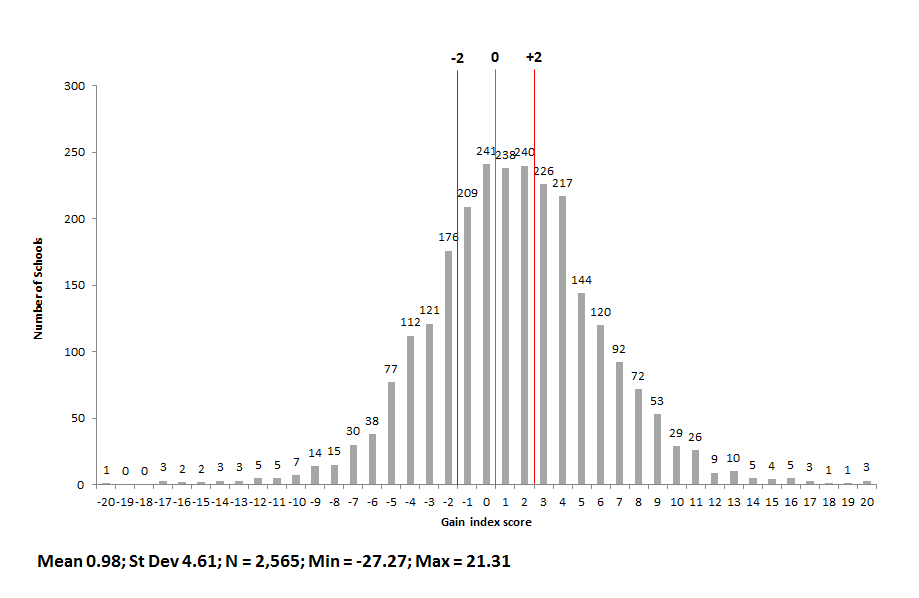 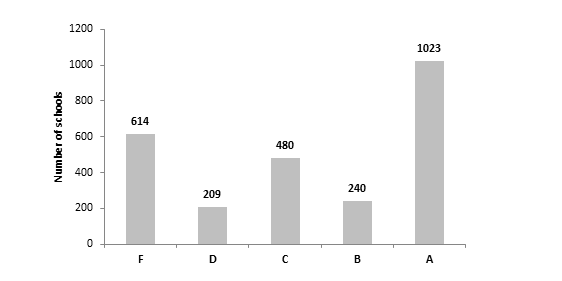 For the first time, the state reported value-added scores and assigned A-F letter grades for three student subgroups. If a school had less than 10 students in a particular subgroup, the state did not report a score or letter grade for that school’s subgroup. Charts 2A to 4B display the distribution of scores and letter grades by subgroup.

1.)    Compared to the distribution of overall school-level value-added scores, there is far less variation in the subgroup scores across schools. (The x-axis scale was kept the constant, in order to compare the “spread” of scores, though the y-axis scale is allowed to vary.) Could the different looking subgroup distributions be a consequence of reporting 1-year scores versus a 3-year score for overall value-added?

2.)    Compared to the letter grade distribution for schools’ overall value-added results, the subgroup letter grades appear to better reflect their underlying distribution of scores. In all three subgroups, the most frequent letter grade was a “C,” which aligns with the clustering of most schools’ value-added scores around the mean. Still, there seems to be too many A’s and F’s, while not enough D’s and B’s. 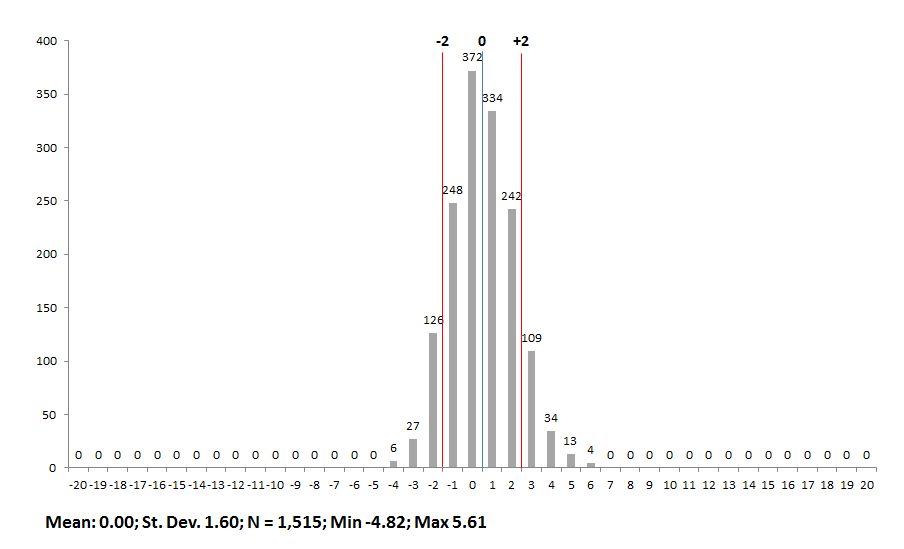 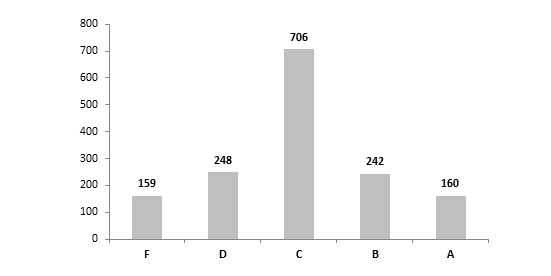 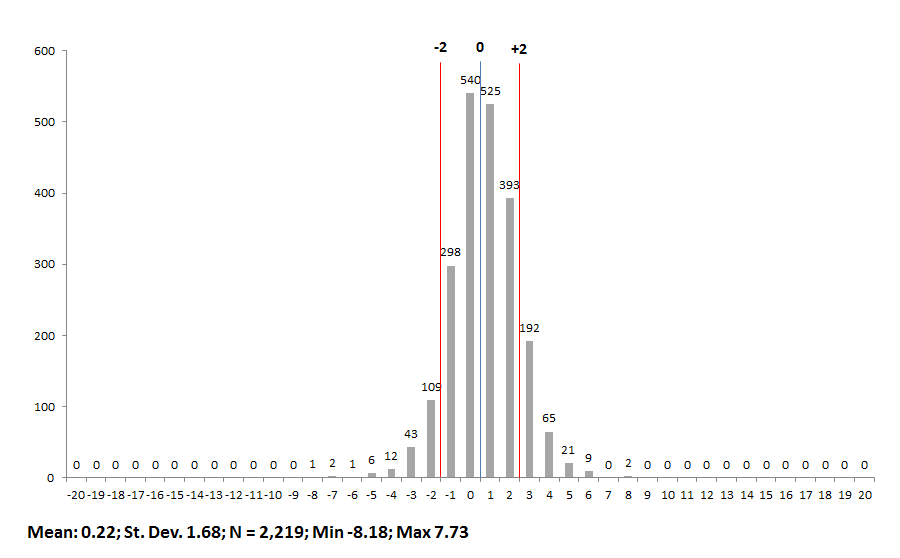 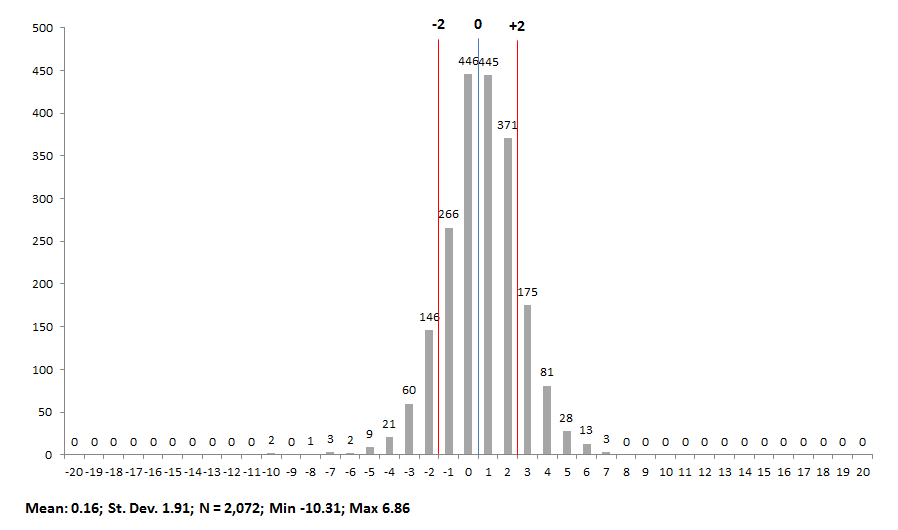 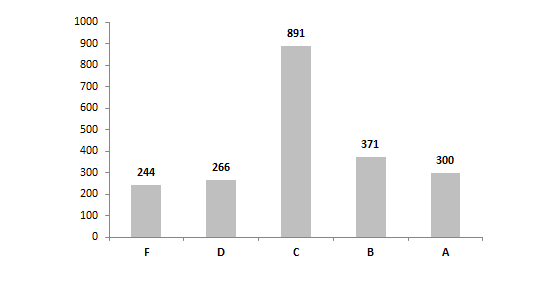 It is critical that Ohio gets its value-added system right. Measuring school performance by raw student achievement is simply not enough—it systemically disadvantages poor schools and it creates perverse incentives for school behavior. For example, under pure accountability for student achievement, schools—especially schools of choice—could be incentivized to “strategically” admit higher-achieving students while ignoring low-achievers, in order to raise their achievement score. This type of behavior may be appropriate for businesses in how they hire, fire, and treat adult workers, but it is questionable behavior for how schools educate students.

So, is Ohio’s value-added system on target? On the one hand, I’m fairly convinced that the value-added model does not harm or help schools based on student demography—at least, along the two key variables the state keeps tabs on (economic disadvantage and race). On the other hand, a level playing field for schools isn’t all we want. In my view, we also want a system that produces numerical output that has meaning. I remain skeptical about whether the index scores provide interpretable and practical information for policymakers and school leaders. Additionally, we also want a letter grading system that accurately identifies high- and low-performing schools, based on the distribution of the data. According to the charts, it does not appear that Ohio has gotten this right, especially for its “overall” value-added grades. Finally, in my opinion, we should want a more transparent system of calculating value-added (a topic for another post).

Maybe Ohio is getting closer. But, I’m just not sure we’re there yet.

[1] Once the state has three years of subgroup data, a 3-year “average composite” value-added index score will be calculated for subgroups. An “index” score is the value-added gain score divided by the standard error.

[2]  Daniel Koretz, Measuring Up: What Educational Testing Really Tells Us (pg. 79) argues that a properly designed assessment will yield scores that roughly approximate a normal distribution. Does the relatively normal distribution of school-level value-added scores reflect an underlying “bell-curve” of student test scores across the state?