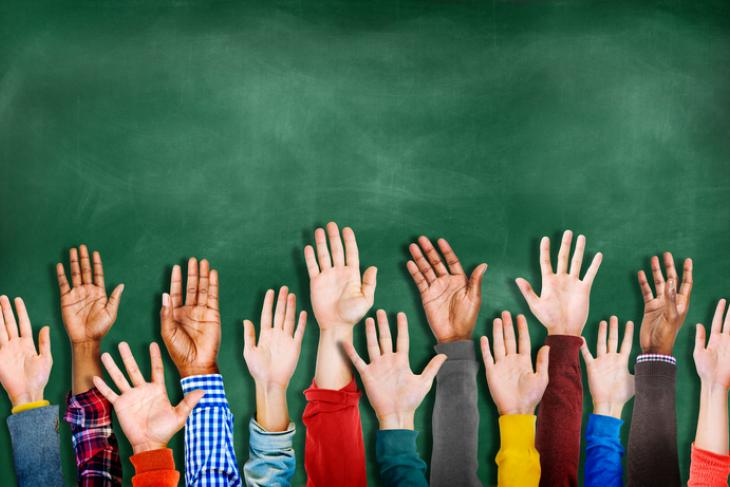 Last year as he was preparing to open a new middle school in Rhode Island, Osvaldo Jose Martí worked as an administrator, first at Blackstone Valley Prep’s existing middle school and then at one of their elementary schools. When the fourth graders there made the move up to middle school, it would be to Martí’s new school. The goal of embedding Martí in the elementary school from January until June: to ensure that both he and the fourth-graders who would become his inaugural class would be equally steeped in the culture of this young start-up charter network.

One moment stands out in Martí’s mind as a vivid reminder of the urgency of the work.

“On this particular day, I had spent the morning doing instructional rounds, popping into classrooms, and providing feedback to our teachers,” he wrote later. “As I walked the halls I came upon a teacher with a second-grade scholar who was walking to their classroom.”

“In three years, Mr. Martí will be your principal just like Ms. Colarusso is now,” the teacher told the boy.

“Full of innocence, the scholar looked at me and said, ‘Wait, how can you be a principal? You’re black,’” Martí, who is from the Dominican Republic, continued. “The comment shocked me. This young African-American boy had not yet encountered a leader who shared his background and so the idea of someone who looked like him rising to a leadership position was impossible to him.”

Now midway through his school’s first year, Martí loves the pace of the work and the feeling that he is building and growing his school community.

Charter schools often occupy some sort of niche. Like the other schools in what will eventually be a seven-school, K–12 network, Martí’s middle school is integrated by race and class. It serves students from four traditional school districts: two suburban and two urban. Martí sees this conscious mixing of kids and families as a vital part of his work.

“Our intentional diversity is so key,” he added. “[Our students] go to school with kids who are so different and yet they are friends.”

His goal is to position them all for success after graduation: “We make a big promise to get them to and through college. It’s huge and scary, but we’ve got to do it.”

Born in the Dominican capital city of Santo Domingo, Martí moved with his family to Connecticut when he was five. He started kindergarten there, but was held back in the first grade because, as an English language learner, he was not reading at grade level.

After the family moved to Rhode Island, Martí attended public schools in Pawtucket. In the eighth grade his parents, concerned about the quality of his education, decided they were willing to do whatever it took to scrape together the money for him to attend a local private high school.

Martí remembers one of his eighth-grade teachers helping him study and prepare for the entrance exam to St. Rafael’s Academy. He got in. And after four successful years, his educational journey took off with a Martin Luther King Scholarship for Leadership to Providence College. A full ride.

In college he majored in business, but felt pulled in another direction. When he thought about what had been most important in getting him to the place where he was—a college graduate with options—one thing became crystal clear. It had been his education.

The idea of working with the neediest students appealed to Martí, so he applied to join Teach For America. To his dismay, TFA rejected him after a phone interview. Nothing if not persistent, Martí pushed back.

“If you’re rejecting me over the phone,” he asked, “who are you taking for the program?”

TFA gave him a chance. And that chance led to five years in schools in Philadelphia, teaching high school math the first two years and coaching teachers the following three.

As a TFA corps member Martí loved teaching, and he loved coaching teachers. But the year he ran a summer school program cemented what he really wanted to do, to run his own school.

His reason is simple: “I love working with students and families.”

Plus the pull of Martí’s hometown was strong. So despite his fondness for the City of Brotherly Love, he took his dream of leading a school back to where he grew up, the tiniest state in the union.

Perseverance—which Martí has in spades—is one of Blackstone Valley Prep’s five core values. And the belief that the school community must be viewed as a “team and family” seems to be right in line with Martí’s decision to return home.

“I loved Philly but I wanted to come back and work in a school that served my community,” he said. “Working in Pawtucket, I see a lot of myself in so many of our students, their families working really hard to do what’s best for them. I remember my dad missing my kindergarten events because he was working two jobs.”

It’s a good thing for Rhode Island that Martí answered his internal call to come home. The state’s student achievement has persistently lagged. In the most recent report put out by Education Week, the Ocean State’s current student achievement earns it a D and a national rank of thirtieth.

If the other schools in Blackstone Valley Prep’s small network are representative of where Martí’s school is headed, the school will far outpace state averages. The network’s schools have already turned those gaps on their heads in ways that are completely unprecedented.

Network leaders are quick to insist there is no secret sauce or magic bullet. He points to incredibly hard work, long days and an unwavering belief in the potential of all students, regardless of their zip code or the educational background of their parents. The mantra you hear often inside their school buildings is around preparing their scholars for “college and the world beyond.”

Martí is overwhelmed by the enormity of the promise that he has made to get Blackstone’s kids to and through college. But he believes in that promise, in large part, because he knows that education is the reason that he has been able to realize his dream. And when it seems hard, he has only to think of the second-grader who didn’t know black men could be principals.

“I explained to the scholar that I was black and Dominican,” Martí says. “I also explained to him that I was fluent in Spanish, but that those details did not mean I couldn’t be a principal. I then told him that he could be anything he dreamed.”

Martí sees himself in his students every day. And it’s very important to him that students see themselves in him. A struggling reader in first grade. A man with black skin who speaks Spanish. A Providence College graduate. A school leader. And always, a kid from Pawtucket.

Disclaimer: Two of the writer’s three children currently attend a school in the same network where Mr. Martí is a principal.

Editor’s note: This article was originally published in a slightly different form by the Huffington Post.