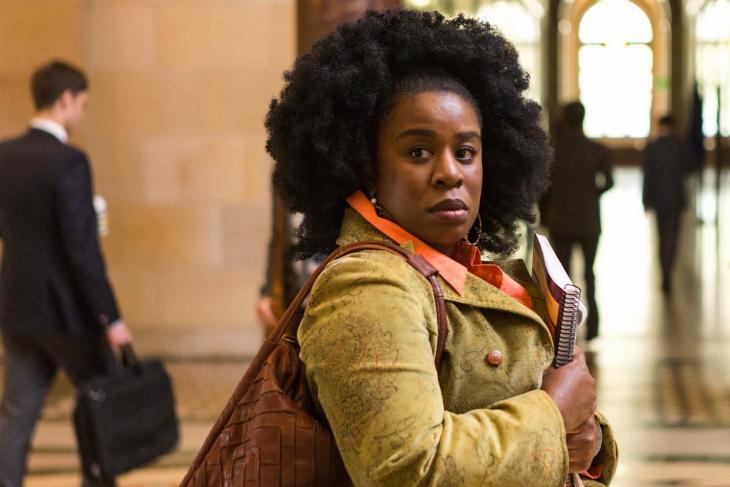 A woman scrubs the bathroom floor on her hands and knees, hair pulled back in a scarf. Another woman dressed in a business suit applies lipstick at the mirror. Both are mothers. Both are black. One is a congresswoman. The other cleans the toilets and floors in the congresswoman’s office. And soon after their meeting in the bathroom, they become fierce opponents over the right for all students, including poor ones in Washington, D.C., to attend a quality school.

This is a scene early in the film “Miss Virginia,” a true-story drama about mom-turned- education-activist Virginia Walden (Ford), who launches the grass-roots organization D.C. Parents for School Choice in 1998. The group’s goal was the establishment of a scholarship program so that low-income children could escape their local public schools and gain access to private schools.

Virginia Walden, played by Uzo Adoba, is a community hero whose courage and love for her son—and for other people’s children—drives her to stand up to the status-quo protectors in charge of running her city. She quickly realizes that the last thing the elected officials want is a brave and informed mom with the fire inside to launch a movement.

The bathroom scene serves as a metaphor for how those in power dismiss the people they claim to serve, hoarding access to opportunity while denying it to those they represent. The congresswoman literally has to look down to converse with her cleaning lady, who is also a constituent. Walden has taken the cleaning job to pay for her son’s new private school. The situation at his zoned high school has reached a crisis point, and Virginia knows that if she doesn’t take drastic action, she is going to lose her son. But when the time comes for her to pay his tuition, despite her relentless efforts, the amount in the envelope she hands to the school director is not the amount required for a semester of school.

James is forced to leave the school and return to his previous high school. Amidst that pain and disappointment, a parent activist is born.

Walden joins forces with an unlikely ally—white, Harvard-educated Congressman Clifford Williams, played by Matthew Modine. While most of the black elected officials fight against Miss Virginia’s efforts to increase educational options for the children in her community, this Ivy League–educated white dude who loves long-shot legislation and golf becomes invaluable to her efforts. He drafts the legislation that ultimately becomes the DC Opportunity Scholarship Program.

The public schools that Walden encounters as a mother in the 1990s are a human tragedy—less than 10 percent of black fourth graders are proficient in reading. Families of means, including all of the lawmakers who consistently vote against bills that would help poor parents, secure better options for their own children. Virtually all of the D.C.’s schools are unacceptable for their own children, yet they expect Walden and the other parents in the nation’s capital to accept them for their children.

Fast forward to 2019 and there are still countless parents in the same situation in which Walden finds herself in the film. Nationally, only 10 percent of black boys read at grade level. It should not be lost on anyone that 85 percent of juvenile offenders are functionally illiterate and 70 percent of inmates in America’s prisons cannot read above a fourth grade level. To quote Dr. Howard Fuller, who was on the front lines with Virginia Walden during the 1990s and continues in that battle today, “How can you say you’ve got a good school if your students can’t read?”

During the film, Virginia Walden watches this very phenomenon play out before her eyes. She sees boys dropping out, selling drugs, going to jail, and getting shot. She knows in her heart that most, if not all, of these boys’ lives could have been different if they had been given access to the education they needed and deserved. She fears for her son.

Those of us who support family autonomy and educational freedom stand on the shoulders of giants like Virginia Walden Ford in the work of getting all children access to the schools they deserve. In “Miss Virginia,” we see one mother, one profile in courage, put it all on the line for her son and for the sons and daughters of every family in D.C. who wants better for their children but doesn’t have the money to access it. Twenty years later, as opposition to programs like the DC Opportunity Scholarship grows among the political classes on the left, we must remember the words Walden speaks to the elected officials looking down on her from behind their microphones: “You will do right by my son. This is America. You cannot, you will not, deny our children their right to learn.”

Miss Virginia will be released in select theaters October 18th and is available for pre-order on iTunes.. The New York Times, USA Today, and Essence Magazine have called it a must-see movie.

This essay was first published by Project Forever Free.