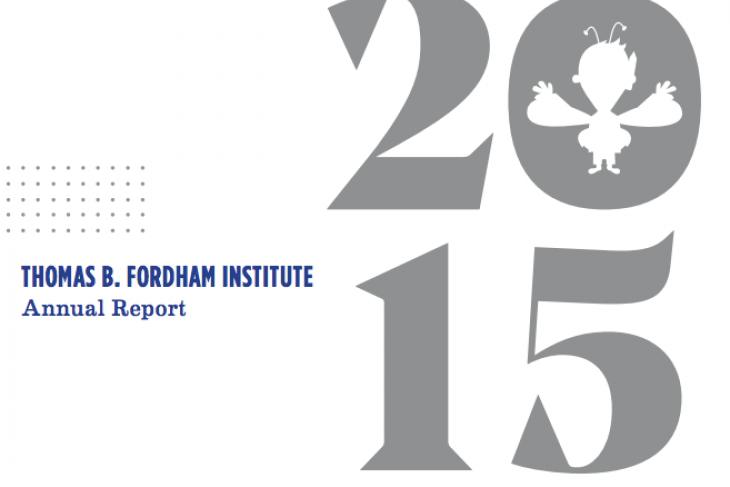 Editor's note: This letter appeared in the 2015 Thomas B. Fordham Institute Annual Report. To learn more, download the report.

Think tanks and advocacy groups engage in many activities whose impact is notoriously difficult to gauge: things like “thought leadership,” “fighting the war of ideas,” and “coalition building.” We can look at—and tabulate—various short-term indicators of success, but more often than not, we’re left hoping that these equate to positive outcomes in the real world. That’s why I’m excited this year to be able to point to two hugely important, concrete legislative accomplishments and declare confidently, “We had something to do with that.”

Namely: Ohio’s House Bill 2, which brought historic reforms to the Buckeye State’s beleaguered charter school system, and the Every Student Succeeds Act, the long-overdue update to No Child Left Behind

In neither case can we claim anything close to full credit. On the Washington front especially, our contributions came mostly pre-2015, in the form of writing, speaking, and networking about the flaws of NCLB and outlining a smaller, smarter federal role. We were far from alone; figures like Rick Hess at the American Enterprise Institute (AEI) have long been our compatriots in this work. And it only came to pass because friends on Capitol Hill—especially education committee chairs Lamar Alexander and John Kline and their staffs—were sympathetic to these ideas and had the persistence, clout, and temperament to push ahead with them.

In Ohio, our influence was more direct. We’re glad to have played a role in bringing attention and urgency to the issue of charter school reform—in part by serving as a model charter authorizer ourselves, in part via two hard-hitting studies released in late 2014, and in part by working hand in glove with our friends in the Ohio state legislature to get the job done. Once again, however, our contribution was easy compared to the courage and tenacity shown by the likes of Governor John Kasich—and especially Senate Education Chair Peggy Lehner, who deserves a medal of honor for outhustling and outsmarting Ohio’s low-quality charter lobby (particularly given their strong political ties).

2015 also marked a key milestone on America’s journey toward higher standards, tougher tests, and a more honest assessment of student performance. For the first time, states across the country gave assessments linked to the Common Core State Standards and almost uniformly raised their expectations for “proficiency” dramatically. As a recent Education Next article proclaimed, “Overall, thirty-three states have strengthened their standards since 2013, while just five have loosened them, with six leaving their standards essentially unchanged. In short, the Common Core consortium has achieved one of its key policy objectives: the raising of state proficiency standards throughout much of the United States.” This has been one of our key objectives too, ever since our 2007 publication of The Proficiency Illusion. We are heartened to see it achieved.

These victories are a real shot in the arm, both nationally and in our favorite state. They give us hope that our research and commentary on other critical topics in 2015 will also bear fruit in the years ahead—especially our brand-new studies on next-generation assessments and the best cities for school choice, as well as earlier reports on school closures, gifted education, and pre-K in charter schools.

Thank you, loyal supporters and readers, for making this work and impact possible. And thanks, too, for your patience. It may seem at times that the torrent of words coming from Fordham in D.C. and Ohio—reports, blogs, tweets, op-eds, podcasts, and more—vanishes into the river that is the Internet. But every once in a while, we get to see the outcome of our efforts. We greatly appreciate the confidence you place in us.