Instructional coaches: The heroes of the Golden Age of Educational Practice 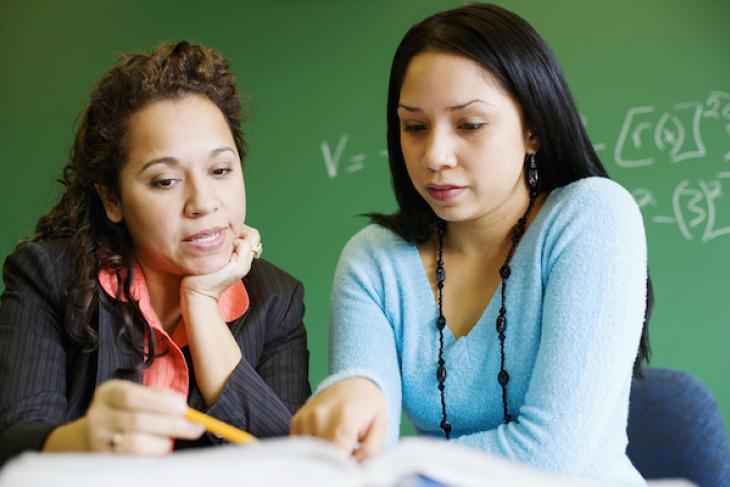 Whether initiated from the bottom-up or the top-down, any effort to help educators align their practice with the best evidence is going to succeed or fail on the strength of its implementation. As my colleague Robert Pondiscio wrote recently:

Shifting ed reform’s focus to improving practice is an acknowledgment that underperformance is not a failure of will, but a lack of capacity. It’s a talent-development and human capital-strategy, not an accountability play. Forcing changes in behavior, whether through lawmaking or lawsuit, may win compliance, but it doesn’t advance understanding and sophistication. Teachers need to understand the “why” behind evidence-based practice to implement it well and effectively.

He’s right, of course. But how can schools and systems actually do this—build capacity, and teachers’ understanding in a way that will alter what they actually do in their classrooms?

Scholars and reformers have been struggling with this question for basically forever. (See, for example, this classic thirty-year-old article by my University of Michigan thesis advisor David Cohen, “A Revolution in One Classroom: The Case of Mrs. Oublier.”) Bundling evidence-based practices into a coherent, highly teachable curriculum can help, as can videos of teachers delivering the material with real groups of students. But ultimately, the transmission of evidence-based practices is a slow, steady, and social grind, not something to be achieved entirely by articles, videos, or reports.

That’s the takeaway from this excellent Atul Gawande article in the New Yorker from a few years ago, “Slow Ideas.” The whole article is worth a (slow) read, but let me highlight some key passages about various attempts to change medical practice, and save lives, in poor, low-tech parts of the world.

Every year, three hundred thousand mothers and more than six million children die around the time of birth, largely in poorer countries. Most of these deaths are due to events that occur during or shortly after delivery. A mother may hemorrhage. She or her baby may suffer an infection. Many babies can’t take their first breath without assistance, and newborns, especially those born small, have trouble regulating their body temperature after birth. Simple, lifesaving solutions have been known for decades. They just haven’t spread…

The most common approach to changing behavior is to say to people, “Please do X.” Please warm the newborn. Please wash your hands. Please follow through on the twenty-seven other childbirth practices that you’re not doing. This is what we say in the classroom, in instructional videos, and in public-service campaigns, and it works, but only up to a point.

Then, there’s the law-and-order approach: “You must do X.” We establish standards and regulations, and threaten to punish failures with fines, suspensions, the revocation of licenses. Punishment can work. Behavioral economists have even quantified how averse people are to penalties. In experimental games, they will often quit playing rather than risk facing negative consequences. And that is the problem with threatening to discipline birth attendants who are taking difficult-to-fill jobs under intensely trying conditions. They’ll quit.

The kinder version of “You must do X” is to offer incentives rather than penalties. Maybe we could pay birth attendants a bonus for every healthy child who makes it past a week of life. But then you think about how hard it would be to make a scheme like that work, especially in poor settings…

Besides, neither penalties nor incentives achieve what we’re really after: a system and a culture where X is what people do, day in and day out, even when no one is watching. “You must” rewards mere compliance. Getting to “X is what we do” means establishing X as the norm. And that’s what we want: for skin-to-skin warming, hand washing, and all the other lifesaving practices of childbirth to be, quite simply, the norm.

Working with people one by one was the approach taken by a Bangladeshi nonprofit in the 1980s in a remarkably successful initiative to combat cholera:

The organization didn’t launch a mass-media campaign—only 20 percent of the population had a radio, after all. It attacked the problem in a way that is routinely dismissed as impractical and inefficient: by going door to door, person by person, and just talking.

It started with a pilot project that set out to reach some sixty thousand women in six hundred villages…The workers were only semi-literate, but they helped distill their sales script into seven easy-to-remember messages: for instance, severe diarrhea leads to death from dehydration; the signs of dehydration include dry tongue, sunken eyes, thirst, severe weakness, and reduced urination; the way to treat dehydration is to replace salt and water lost from the body, starting with the very first loose stool; a rehydration solution provides the most effective way to do this...

Initially, the workers taught up to twenty mothers per day. But monitors visiting the villages a few weeks later found that the quality of teaching suffered on this larger scale, so the workers were restricted to ten households a day. Then a new salary system was devised to pay each worker according to how many of the messages the mothers retained when the monitor followed up. The quality of teaching improved substantially. The field workers soon realized that having the mothers make the solution themselves was more effective than just showing them. The workers began looking for diarrhea cases when they arrived in a village, and treating them to show how effective and safe the remedy was…

The program was stunningly successful. Use of oral rehydration therapy skyrocketed. The knowledge became self-propagating. The program had changed the norms.

No, the analogy is not perfect for K–12 education. Implementing a high quality English language arts or mathematics curriculum requires a much higher level of intellectual dexterity than treating cholera. But the tale resonates on several levels. It illustrates the power of social learning, the importance of active learning, the willingness of program designers to adapt their approach based on what they were hearing in the field, and ultimately the incredible impact on real outcomes that can come from a peer-to-peer approach. All of this is applicable to implementing evidence-based practices in American schools.

This, however, requires someone to play the role of the healthcare workers, the peers, the conduits. Thankfully, the vast majority of American schools—especially elementary schools—already have such people today. We call them instructional coaches.

One of the most significant, yet least noted, developments in the recent history of American schooling is the advent and scaling of this whole new class of educators. According to the National Center for Education Statistics, three-fourths of all primary schools and two-thirds of all high poverty schools have someone in a coaching role. A recent meta-analysis by Matthew Kraft and his colleagues indicates that coaching is very effective at changing instruction and somewhat effective at improving outcomes, especially when programs are relatively small-scale.

Obviously, giving someone the title of “instructional coach” doesn’t suffice; this is another case where implementation is everything. The coaches themselves need to be highly effective educators—both of students and of fellow teachers. Helping other instructors improve their craft takes a high degree of social and emotional skill, technical expertise, and patience. It can’t be generic, lest it will prove no more effective than conventional professional development. Coaching tied to specific, high quality curricula is probably best. And it’s not inexpensive; as Diana Quintero pointed out in a recent article for the Brookings Institution’s Brown Center, these coaches are precisely the sort of positions that have inflated the ranks of “non-teachers” working in our schools, which in turn has squeezed out other priorities, like higher teacher pay.

If deployed well, however, instructional coaches show great potential. So state and local leaders should ask themselves, when trying to implement a high quality curriculum or other evidence-based practices:

This solution isn’t sexy or particularly “disruptive.” It’s hard work. But whether we want to save children’s lives from cholera or illiteracy, there are no shortcuts.