“I see heaven in the eyes of these boys”: The birth of an all-male charter school in Southeast Washington, D.C. 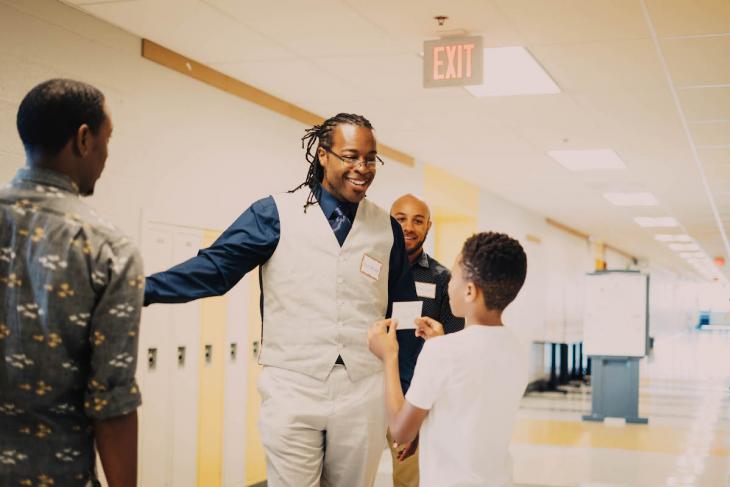 Shawn Hardnett knows education. And he knows schools. And after working in public education for twenty-five years and visiting upwards of two hundred schools, one truth became impossible for him to ignore: A staggeringly low number of black boys are going to college. So began a journey of investigation that culminated in the opening of Statesmen College Preparatory Academy for Boys in Washington, D.C., of which he is founder and executive director.

One of the most visceral motivations for the project came when Hardnett decided to take a look at the life outcomes of the boys from the block where he had grown up. Standing in his kitchen, writing directly on his butcher block, he drew his street with all the houses and then labeled each with the names of the boys who had grown up in them. With the help of his sister, he was able to confirm that, out of the twenty-nine boys on his block, nineteen had gone to prison, seven were dead, five had graduated from high school, and just one had graduated from college. That one was him.

He began to grapple with the questions, “What is going on that we are doing so badly for our boys?” and “Why are they shutting down?” He knew there was a 50–60 point gap between white girls and Black boys in reading proficiency. He knew that white boys trailed the girls, too. He needed to understand why, with the same classes and the same curriculum, boys were faring so poorly in general. But more importantly, he was committed to finding out why black and brown boys were, in his words, “at the bottom of the well. And struggling.”

Hardnett went looking for answers. He and his team talked to 600 black and brown males—450 boys and 150 men—from across the country in a series of focus groups and interviews on school visits.

The responses were clear and consistent: These boys need structure, impenetrable relationships, and interest—and they aren’t getting them.

They remembered the best classes as those in which teachers really knew and loved the material, and wanted students to love it, too. They talked about how the learning stopped all the time in classes where distractions and student disruptions were not managed. They felt safe in structured, well managed classrooms and did not engage in or create drama when they were in them. On the contrary, they admitted to “poppin’ off” in the class next door if the teacher did not adequately manage distractions and disruptions.

Impenetrable relationships were the ones that they all said “changed their lives.” They described a teacher, coach, leader, or family member who had stood by them through difficult times, who continued to encourage them, and who refused to give up on them even when they had given up on themselves. They reported that they would “perform” for this person even when they would not or could not perform elsewhere. They felt like they “belonged to” this person. Hardnett says it is “impossible to overstate” how much these relationships mattered to the boys and to the men that he and his team interviewed.

Interest was described as “excitement” by the boys and “exposure” by the men. What the adults meant was that they needed to be excited about seeing something new—travel, for example, going somewhere different that showed them there was a big wide world beyond their city block. When they had these critical exposures—unfamiliar people, places, things, and ideas—they prompted a shift in personal efficacy and an expansion of their own conception of what their life could be like—college and all.

Hardnett designed Statesmen College Preparatory Academy for Boys based on what he and his team learned. Now in its second year, it’s a charter middle school primarily serving Wards 7 and 8 in Washington, D.C., areas that suffer from very high rates of trauma and poverty. Almost all of his students are African American, and 30 percent are classified as requiring special education services, a significantly higher rate than surrounding schools.

He and his team believed that opening it as a charter school was the best choice, even though he knew that gaining approval would be a struggle. Experience taught Hardnett that it was the only way he’d have the flexibility and autonomy needed to start and run the school he had in mind. The boys’ needs were acute. They didn’t have time to wait. And district schools are, by design, inflexible and resistant to change. The ability to pivot quickly was a non-negotiable.

In the end, his track record helped him get the school opened, but the fight to do so was brutal. “They gave me my ass,” he said. “There was no free walk to get this done.” Much of the pushback was about the school being for boys only. People worried that it was unfair to girls. And others resisted any and all brain-based pedagogy research about teaching boys, even though Hardnett did not pretend to have all the answers. On the contrary, he was open about his commitment to figuring out why boys are having such different experiences in schools and then providing them with what they needed. He just needed the freedom to rapidly adapt that charter schools provide.

The school’s inaugural class comprised fifty-eight fifth graders, whom Hardnett describes as boys who had done no school work before. He fixed that. “They resist. Parents resist. We go to war. And then they are able to do it.”

He is particularly committed to getting the special education label off black boys. Based on what he has observed in his own experience and in the hundreds of schools he has seen all over the country, the label harms black and brown males over the long term, contributing to their low numbers in college, and staggeringly high numbers in prison.

Hardnett reports that they are seeing tremendous growth in their boys, but proficiency is the ultimate goal, and they have a long way to go. New and high expectations are a difficult change for these fifth-grade boys. But with perseverance, patience, and love, Statesmen is able to get them on board.

The school is run and staffed entirely by black men. The students can see themselves in the adults with whom they spend their days, and they find comfort in knowing that their teachers and school leaders truly understand what it is to be a black boy on the road to becoming a black man.

The school also has a good reputation in the neighborhood and enjoys high demand. It is no surprise that parents seek it out. Single mothers, in particular, have cited the need for “a man in my son’s life” as their reason for choosing the school. Others have said that their son is in special education, and “it just hasn’t been working out. We’d like to try it here.”

They do have a small pocket of students who are middle class and live with two gainfully employed parents, and he’s blunt about “how much better shape students are in if mom and dad are in the home.” But these families see great value in Statesmen, too. They told Hartnett, “my kid goes to a really good school, but he’s losing his soul. I want him to be around black men, to see himself.”

Hardnett says that he and his team worked to get the relationship part right, and they’ve hit it out of the park. Students want to come to school. Parents are satisfied, elated even. Some simply say, “Thank you. My son is better now.”

He’s adamant, however, that people need to understand how hard this work is. “We have to be in the fight to get them to the other side,” he says, talking about his students. “We will get what we believe, so if we don’t believe differently, this will not work.” They’re seeing significant growth across all subgroups. “They’re growing like crazy!” is how he puts it. But he’s honest about how low their proficiency rates still are—even if these results are hardly a surprise, considering that their inaugural year at Statesmen is the first time they’ve been held to any academic standard at all. Hardnett believes that there is no way to do this work without being honest about “the good, the bad, and the ugly.”

Nevertheless, he and his team are steadfast in their belief that their boys can and will become proficient in math and reading. “The kids are beautiful. Funny. Hilarious. Silly. Energetic. Extremely affectionate. Loving. Caring,” he says. “They are everything that we all want little boys to be, and it is a shame that we look at black boys and assume they’re older than they are. They love and want to be loved. We cannot lose sight of that. We cannot let ‘the data’ keep us from seeing the light in their eyes. I see heaven in the eyes of these boys. I need more people to see it too so that we can have higher expectations for them.”