How to widen the achievement gap 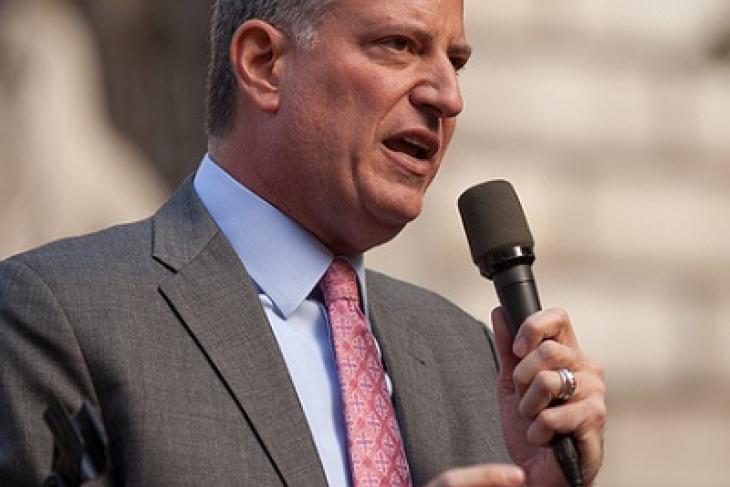 The sweetest and shiniest word in the progressive lexicon is “universal.” It connotes equity, equality, and above all fairness. As a practical matter, however, these lofty ideals are undermined when we give everyone the same even if some need more. This is a truth universally acknowledged.

It also seems lost upon New York City’s uber-progressive mayor, Bill de Blasio, who seems oddly determined at times to make worse, not better, the “Tale of Two Cities” dichotomy between rich and poor New York that he rode into office two years ago.

The second year of de Blasio’s signature education initiative, a $300 million program to provide free, full-time pre-K to all New Yorkers, began this fall with troubling data suggesting that it is badly misfiring. Using census data and information from the mayor’s office, Bruce Fuller—a professor of education and public policy at University of California, Berkeley (Berkeley!)— estimates that there are 103,000 four-year-olds eligible for the program. In many instances, however, those who need it most are not being reached.

Children from low-income homes make up the largest share of program participants, accounting for roughly one-third of the sixty-five thousand registrations. But Fuller calculates that more than twelve thousand kids in the poorest two-fifths of the city’s ZIP codes remain unenrolled in any preschool. According to a report in ProPublica (ProPublica!), Fuller’s data indicates that Mayor de Blasio’s pre-K program added a mere 195 kids from the bottom 20 percent of ZIP codes this fall. Middle-income neighborhoods are showing the greatest gains in registration, while enrollments have actually fallen in nineteen of the city’s thirty-four poorest zip codes.

“We just don’t have the evidence to back why we would heavily finance pre-K in middle class and upper class communities,” Fuller told ProPublica. “I think the mayor has virtuous intentions, but I think once he made this ambitious campaign promise, he sort of charged ahead with blinders on.”

It is no exaggeration to say that the battle for literacy is largely won and lost in early childhood. Children who grow up in well-off homes reap all the benefits of educated parents who speak in full sentences, read to them nightly, and engage them in conversation. They live lives of concerted cultivation, and to them accrue all the blessings of knowledge and language. Low-income children, by contrast, reap few or none of these benefits. Thus a sensible approach, if you were serious about your own Dickensian rhetoric, would be focus your energies—and the public’s tax dollars—on those who need it most. Previous work by Fuller has shown that upper-middle income communities benefit disproportionately from de Blasio’s initiative. There are many words to describe this, but one prevails above all: predictable.

Less attention has been given to the mayor’s speech last week, in which he announced a plan to spend an additional $75 million per year to ensure (here comes that word again) “universal second-grade literacy” by 2026. “To boost literacy, every elementary school will receive support from a dedicated literacy specialist,” the mayor announced.

Well, bravo…sort of. There's a clear and strong correlation between early reading struggles and long-term academic failure. About 90 percent of struggling first graders are still struggling by fourth grade. One in six children who are not reading proficiently in third grade don't graduate from high school on time. Many never do. So it’s encouraging that de Blasio wants all students reading at their grade level by the end of second grade. His focus on early reading makes more sense than his headline-grabbing announcements of “computer science for all” and “AP classes for all” in the same speech.

That said, it’s hard to have faith that the mayor or Chancellor Carmen Farina know what it takes to get kids reading successfully by third grade. Farina is notoriously in the thrall of Lucy Calkins of Teachers' College, a literacy guru whose approach to reading failed a generation of city kids and was wisely dumped by the New York City Department of Education before Farina took over and resurrected it. If Gotham is about to invest $75 million in the same occupying army of “TC” trainers and staff developers who were ubiquitous in city schools ten years ago, it's an occasion for tears, not cheers.

A DOE spokesperson tells me that an implementation plan for the mayor’s early reading initiative is coming later this year, and that the city will work with “national experts and universities” to train the seven hundred new reading specialists they plan to hire. “To already claim these reading specialists will be trained by TC is premature and not accurate,” the spokesperson insists. Here’s hoping that plan starts by examining an important analysis by the Manhattan Institute’s Charles Sahm from earlier this year, which catalogued the K–2 curricula used in the city’s 1,168 elementary and middle schools. The mayor’s initiative promises to prioritize “schools with students that need the most support.” Bravo again. But a premium should be placed on helping teachers rigorously implement the curricula that schools have already purchased and are using. A plan to hire boxcar numbers of “literacy specialists” seems oblivious to that notion and likely to fail.

In sum, the de Blasio administration “has not devised a coherent strategy for addressing the needs of schools in high-poverty neighborhoods,” says Pedro Noguera of UCLA’s Graduate School of Education. “They have to know at a very granular level the academic and social needs of [low-income] kids, and then they have to have a staff that’s trained and resources in place to meet those specific needs.” Doesn’t sound “universal,” does it?

The bottom line: Mayor de Blasio has shown a good instinct for identifying the right targets—early childhood education and reading. But it’s hard to be encouraged that either he or chancellor knows how to hit them.