How the U.S. Stacks Up: FIFA versus PISA

What do the education-policy world and the sports world have in common? For one, Americans are rabidly passionate about both. What’s more, both really love rankings. And you think we’re bad at soccer? We’re even worse in education.

As everyone reading this probably knows, the U.S. has chronically lagged behind our competitors on international tests. It doesn’t matter which subgroup one looks at—high SES, low SES, top scorers, average scorers—the U.S. hasn’t lived up to its potential. Of course, it doesn’t have to be that way. And all of us in the ed-policy world do what we do because we believe our education system can improve. We know we can do better by our eager students.

Well, the World Cup—the crowning jewel of the “Beautiful Game” and the biggest sporting event in the world—is upon us. And it struck us here at Fordham that the similarities are uncanny. Here, too, the rankings don’t love us. Sports Illustrated and the Soccer Power Index say we’re the nineteenth-best team in the tournament. Heck, even our coach Jürgen Klinsmann doesn’t like our chances. Indeed, look at our soccer and education rankings in the graphic below. 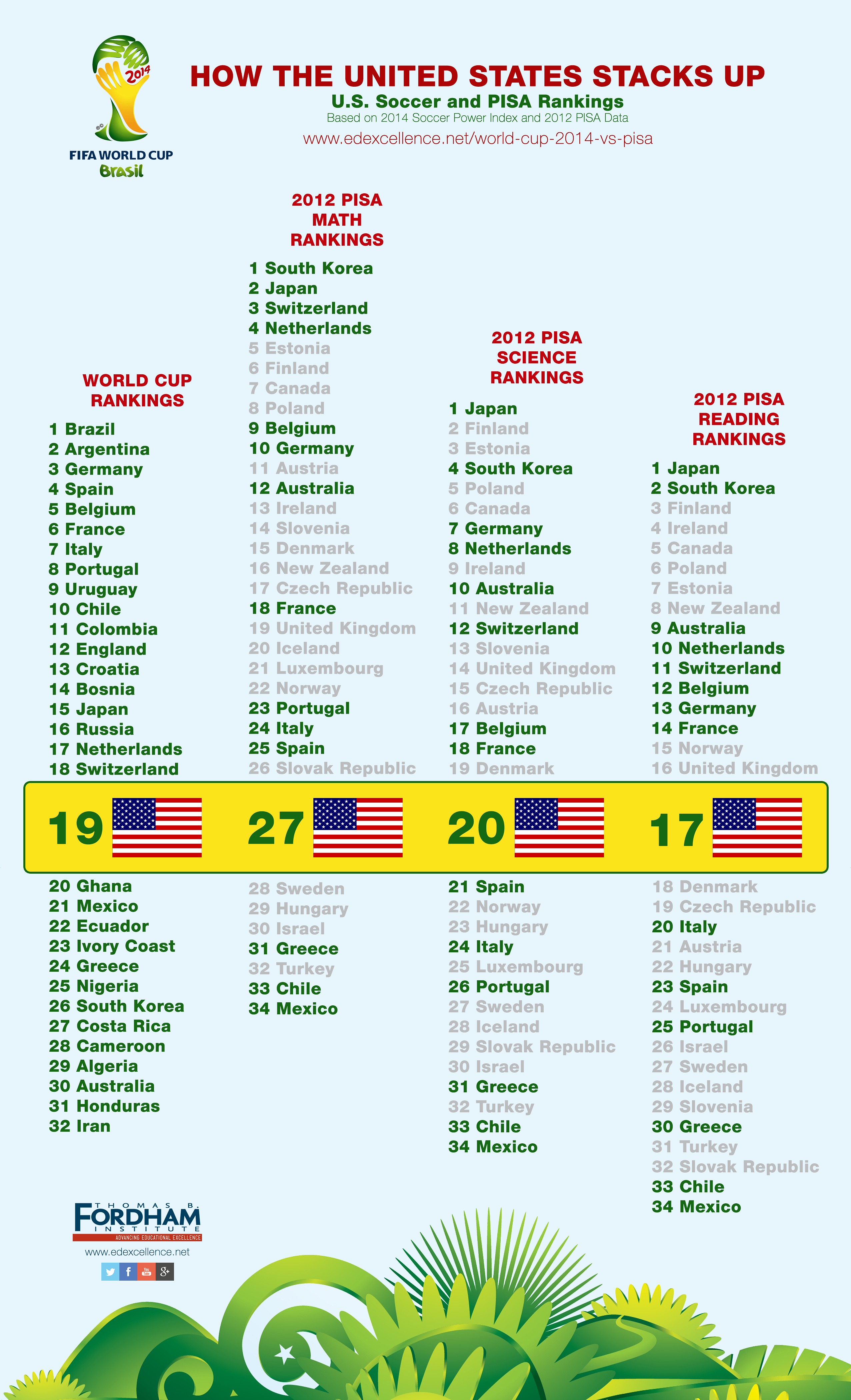 So here we are, nineteenth best in the world in the country’s sixth most popular sport (behind golf), which is, frankly, not high enough. We have 318 million people. The next most populous country in the tournament is Brazil, which has about 203 million. We also have the largest national economy in the world, three times the size of Japan’s, the next most prosperous country in the tournament.

The reality, of course, is that Americans simply don’t care that much about soccer, compared to other sports. So I accept that we should be disappointed, but not surprised, if the U.S. loses to Germany. But education is something different. We should be disappointed, shocked, and dismayed that so many countries are eating our lunch in math, science, and reading.

But this is World Cup season. National pride is running high—as it should be. So what should we make of this? Should we write the tournament off as a building year, with our eyes on 2018? Should we lower our expectations of educational greatness?

The answer, of course, is a resounding no!

We go to the World Cup—just as we put our wonk-pens to paper—to win. Period.

This graph isn’t evidence of hopelessness; it’s a call to action. We ought to use it for motivation and remember it when we witness feats of greatness—like the final U.S. goal against Algeria in the 2010 World Cup that propelled us past the group stage:

Americans believe we can win. We believe we can hold up that World Cup Trophy, no matter the odds. And we believe that we can have the best education system in the world. We expect greatness; it’s all we’ll accept. And because of that, we won’t stop until we achieve it.

We beat Ghana in the most dramatic fashion. We can do it with education, too.

This article was updated on June 17, 2014, after the USA's soccer team beat Ghana's.