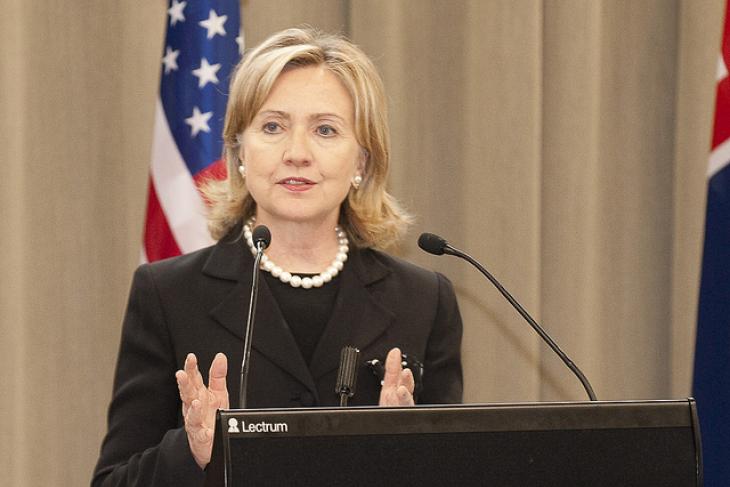 Editor's note: This article was first published on April 23, 2015. It was updated on June 7, 2016, when Hillary Clinton became the Democratic Party’s presumptive nominee for the 2016 presidential election.

Hillary Clinton is America’s first woman to be a presidential nominee for a major political party. In November, she and Tim Kaine will take on the Republican Party's Donald Trump and Mike Pence and the Libertarian Party’s Gary Johnson and William Weld. Clinton has been a public figure since 1979, when she became the First Lady of Arkansas, so she has said much about education over the last thirty-seven years. Here are some of her more recent views:

1. Common Core: “Well, I have always supported national standards. I've always believed that we need to have some basis on which to determine whether we're making progress, vis-à-vis other countries who all have national standards. And I've also been involved in the past, not recently, in promoting such an approach and I know Common Core started out as a, actually non-partisan, not bi-partisan, a non-partisan effort that was endorsed very much across the political spectrum…What went wrong? I think the roll-out was disastrous…Remember a lot of states had developed their own standards and they'd been teaching to those standards. And they had a full industry that was training teachers to understand what was going to be tested. And then along comes Common Core and you're expected to turn on a dime. It was very upsetting to everybody.” April 2016.

3. Testing: “I think we need better and fewer tests that are used for what tests should be used for, first and foremost as to how to improve the educational outcomes for individual children, for classes of children, and for schools of children…I think given the state of where testing is right now, I don't think they're good enough to make that determination [of whether teachers are effective].” April 2016.

4. Opting out of tests: “We have to do a better job of explaining why a common set of standards is really in the interests of the parents who are opting their kids out. Because remember, it is parents who are opting their kids out. And the parents are feeling like what is this about. This doesn't have anything to do with educating my child. So clearly, we haven't done a very good job of explaining it…[Still, if my granddaughter was 12-years-old right now], I would probably take the test, but that would be just without any specifics about what was going on, and what had happened during the year, and I mean without all of that.” April 2016.

5. Early childhood education: “We have got to have early childhood education, especially starting with low income disadvantaged kids, if we're going to prepare kids to succeed when they get to elementary school…It's a big priority for me. And you know, I've seen only early results so I don't want to extrapolate from them, but there seem to be some very positive early results in New York City about universal pre-K, because it's not just the sort of academic environment, it's the social environment. It's giving kids a chance to learn how to work in groups. It's giving, you know, kids who needed, maybe more structure, so there seems to be some positives coming out. We'll follow that closely. But everything that I've seen and I've worked in this field for a long time since I was at the Children's Defense Fund, what I did in Arkansas, is that quality pre-school programs can help to level the playing field for poor kids, for disadvantaged kids.” April 2016.

6. Equity and upward mobility: “We have to do things differently, but it should all be driven by the same commitment to try to make sure that we educate every child. That's why I was a senator and voted for [NCLB], because I thought every child should matter and shouldn't [be told], 'You're poor' or, 'You've got disabilities, so we are going to sweep you to the back; don't show up on test day because we don't want to mess up our scores'. No! Every child should have the same opportunity, and so I think we've got to get back to basics, and we have got to look to teachers to lead the way on that.” April 2015.

7. Education for disadvantaged students: “There is very solid research about how you help little kids learn to read, help them with numeracy, help them develop the skills to be a student, and we should get back to those basics. We know that if you have a longer school year and a longer school day for disadvantaged kids, it gets better results. If you have more help in the classroom, particularly if the classroom has a lot of kids who are poor kids and remember this is the first year that it's been recorded, that we have a majority of poor kids in our public schools. They are coming to school with all kinds of issues and problems. We've taken nurses out of school. We've taken social workers out of school. We have disconnected the school from the larger community, so let me end with this, saying you know I think our schools need some more TLC. What do I mean by that? We've got to invest more in good teaching. Yes, we need accountability measures, but let's connect them to what the teachers are facing. When you are a teacher in a poor school, and you have enormous behavioral problems, when you have kids coming to school hungry, when you have kids who are homeless, you have a tougher job than the kids who show up in Chappaqua where I live.” April 2016.

8. Gender equality in education: “We know when girls have equal opportunities to primary and secondary school, cycles of poverty are broken, economies grow, glass ceilings are cracked, and potential unleashed.” September 2014.

9. Teachers’ unions: “You know what—I have told my friends at the top of both unions, we’ve got take a look at [the accusation that unions protect bad teachers] because it is one of the most common criticisms. We need to eliminate the criticism. You know, teachers do so much good. They are often working under [the] most difficult circumstances. So anything that could be changed, I want them to look at it. I will be a good partner to make sure that whatever I can do as President, I will do to support the teachers of our country.” March 2016.