"Grease the gears" for first-generation students: An interview with Daniel Porterfield 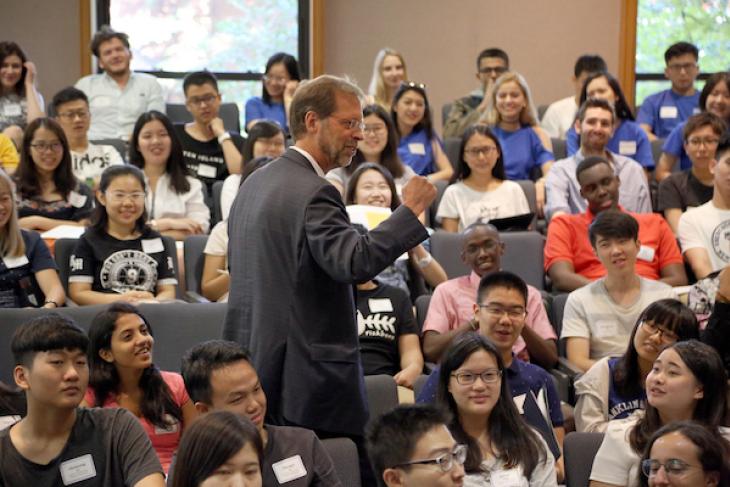 Last month, Dan Porterfield presided over his final commencement as President of Franklin & Marshall College before leaving the Lancaster, Pennsylvania, school he had led since 2011 to become the president and CEO of the Aspen Institute. Under Porterfield, F&M partnered with several high-profile charter and Catholic school networks and programs, including KIPP, Cristo Rey, Uncommon Schools, Achievement First, and the Posse Scholars program, to attract low-income students of color to F&M and other selective colleges, and to keep them persisting. Those efforts were the centerpiece of “No Excuses Kids Go to College,” a cover story Robert Pondiscio wrote for Education Next in 2013. Pondiscio conducted an “exit interview” with Porterfield last month on the lessons learned from F&M’s work, as well as Porterfield’s plan to continue those efforts at Aspen.

Robert Pondiscio: The issue of improving college access and graduation rates for “first generation” college-goers from disadvantaged subgroups is strongly associated with you and the work you've done at F&M. What motivated you to make this your issue? And what have you learned from your experience?

Dan Porterfield: What motivated me was the recognition that there are great, well prepared, and highly motivated students across the whole American mosaic, and a growing number of schools, scholarship programs, access programs, and community organizations that are cultivating that talent for success at rigorous colleges. I came to feel that the top colleges could compete together rather than against each other to develop promising practices for recruiting more top students from low-income backgrounds. That's the big thing, that colleges can and should work together to provide greater service to our country rather then competing against each other for what is, I think, the fool’s gold of rankings and metrics of prestige that really don't widen the circle of opportunity in our country.

Pondiscio: It was an unpleasant surprise and humbling to many of us in K–12 and so-called “no excuses” charter schools to learn how challenging it is to keep “first-gen” college students persisting through college and to graduation. Were you as surprised as the rest of us in K–12?

Porterfield: No. Years of working at Georgetown as a professor and senior vice president, living on campus and working with students, gave me a great feeling for the range of experiences that first-generation college-goers have. I anticipated when I started at Franklin & Marshall that, by partnering with top performing public schools and programs, we would be able to build pipelines of strong students. It was incumbent upon us to work with those students, both individually and as a group, to ensure that we could unlock the resources of the college and help those students develop their own pathways to their own success. I also had a lot of confidence that schools that have the resources to meet both financial aid for students and help students develop “college knowledge” early could enable them to thrive.

Pondiscio:  So as you leave higher education, what are your takeaway lessons for ed reform, college-prep charter schools, and K–12 education at large?

Porterfield: Society needs to adapt in making sure that more students have access to a high quality college-prep curriculum. But our high school and pre-college partners have seen that just giving most of their students a strong college-prep curriculum isn't enough. They need colleges to meet their full financial need. They need the colleges to see them and hear them and treat them as assets to the school. And they need their colleges to be able to grease the gears and be flexible enough to respond to different needs of some first-generation college-goers. The reality is lower-income students often end up in schools that don't have enough resources to meet some of their needs. Or they end up in schools where there's not a critical mass of such students, and first-generation students don't necessarily know how to advocate for themselves in such settings. Colleges have to invest in the needs of all students and make sure they have strategies for responding to the particular needs of lower-income students who need all three things: strong pre-college education, a great bridge, and then commitment at the college level.

Pondiscio: Let me put you on the spot a little bit. In K–12 ed reform, the idea that everyone seemed to agree with twenty years ago was that college is for everyone. Where do you stand on that?

Porterfield: Our young people will grow up to live and work in a science- and tech-driven global knowledge economy, where one’s ability to work with concepts and to change the way one works as technology changes will be critical. That’s point one. Point two is that our country is in the midst of demographic change that is extremely important, including the graying of the country as the boomers retire. In the context of all that change and the nature of an interdependent global economy, we need to invest in the talent of younger Americans to be able to live and work and provide for their families and a growing percentage of the population that’s retiring. So I think it's important to invest in talent. That may not be defined by going to a residential liberal arts college, but everybody’s going to have to learn continuously in their adult lives in the world we're entering. Everybody's going to have to have the intellectual agility to separate the wheat from the chaff in terms of good or bad knowledge. In order to be an active citizen in a democracy, everyone’s going to need to be willing to learn the issues and to think about what's in the best interest of communities large and small and the nation as a whole. If we're not investing in the education of the young from pre-K through the end of high school, then we're essentially limiting their capacity to be lifelong learners, lifelong innovators, lifelong contributors to political discourse, and lifelong providers for the older generation.

Pondiscio: You are now going to the Aspen Institute, and I'm sure you are not done with these issues. What will that perch allow you to do to advance this agenda that was either beyond the scope of your work or your resources at Franklin & Marshall?

Porterfield: Aspen has two excellent programs that I've worked with. The Education and Society Program led by Ross Weiner, and the College Excellence program led by Josh Wyner. Both Josh and Ross are superb at gathering collaborators from a variety of sectors to work together, frame a problem well, and then try to have collective impact. The Aspen method, embodied by Josh and Ross and many others working at Aspen, is I think very promising for a nonprofit organization to be developing for this era. How do we frame problems and then solve problems and reach defined goals to collective action? And that's what I hope Aspen continues to do and becomes known for doing very well in education and in many other areas.

Robert Pondiscio is senior fellow and vice president for external affairs at the Thomas B. Fordham Institute. He is also a senior advisor to Democracy Prep Public Schools, a network of high-performing charter schools based in Harlem, New York. He writes and speaks extensively on education and education-reform issues, with an emphasis on literacy, curriculum, teaching, and urban education. After twenty years in…