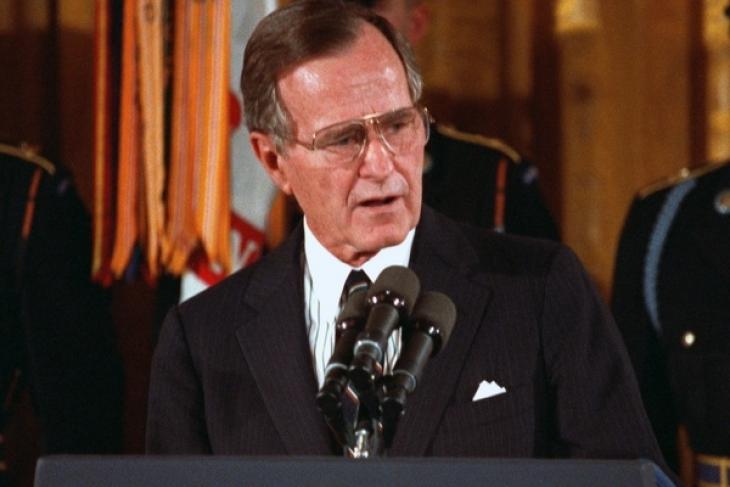 Proposals set forth by the forty-first president have influenced decades of K–12 education policy.

“I want to be the education president. I want to lead a renaissance of quality in our schools.”

George H.W. Bush made that declaration in January 1988, at a high school in Manchester, New Hampshire.

As Americans reflect on his legacy following his death, one thing is clear: This was a promise kept.

Bush’s America 2000: An Education Strategy, unveiled at the White House on April 18, 1991, contained nearly all the key ingredients for what became the mainline, bipartisan K–12 reform legislative agenda for governors and succeeding presidents.

His school choice legislative proposal for a GI Bill for Kids, while controversial and never enacted, was also far-sighted and inspired many of today’s state school choice programs.

Together, the ideas found in these proposals formed a strategy and framework for K–12 policy discussions since then.

I was privileged—and honored—to have a front seat during much of this policy work, especially America 2000 and the GI Bill for Kids. I led a small group working with then-U.S. Secretary of Education Lamar Alexander to develop the framework, strategy, and school choice proposal.

A nation at risk

When he took office as president, Bush was already intimately familiar with the percolating debate over how to improve America’s education system. He was vice president in 1983 when the Reagan administration released A Nation At Risk, a report that identified a serious “quality” problem in education—that student results were mediocre and young people were not learning enough for work, citizenship, and life in the twenty-first century.

In fact, when the nation’s governors met in Portland, Maine, in the summer of 1983, the vice president and First Lady Barbara Bush hosted a lobster feast and clambake for the state leaders at their Kennebunkport home. Discussions focused on the report.

Then-Secretary of Education Ted Bell relates in his memoir how that “freewheeling discussion …helped set the stage for many of [the governors’] reforms [that followed in the states]” and the actions he took as secretary.

A time for results

When Tennessee Governor Lamar Alexander (later appointed as Bush’s secretary of education) led the National Governors Association in 1985–86, he initiated a five-year bipartisan project which examined the K–12 “quality” problem and proposed solutions to it.

In their 1986 report A Time for Results, the governors proposed tracking state progress on implementation of their K–12 reform initiatives.

The bipartisan report called for “some old fashioned horse-trading.” States would lead reform efforts by defining education results that were expected of students and schools, allowing school districts and schools more autonomy, freedom, and less bureaucratic red tape to deliver those results.

This viewpoint became a key notion underlying the charter school idea—that schools be given autonomy as long as they deliver results.

The report was the basis for the nation’s first—and only—bipartisan Governors Education Summit, convened in 1989 by President Bush soon after his inauguration. The summit produced the nation’s first education goals defining what results and aspirations the U.S. should have for its young people and its education system.

America 2000 and the GI Bill for Kids

America 2000 was a national strategy—not a federal program—focused on six national goals, with four key themes:

The memo to President Bush from Secretary Alexander seeking approval of the strategy urged the president to lead “a populist crusade” for education reform.

“This strategy grows directly out of the Administration’s well-known emphasis on recognizing and rewarding excellence, outcomes rather than inputs, accountability for performance, parent choice, and strong partnerships with the governors,” the memo read. “It provides a way to fulfill your pledge to be the ‘Education President.’”

The GI Bill for Kids, meantime, proposed a new federal demonstration program to give $1,000 annual scholarship in federal dollars to each child of a middle and low-income family to attend any lawfully operated school—public, private, or religious.

This strategy and the unsuccessful choice proposal became the basis for much of what followed in federal and state education policy.

At the federal level, this included the Clinton administration’s Improving America’s Schools Act and the Goals 2000 Educate America Act; the Bush administration’s No Child Left Behind; the Obama administration’s Race to the Top, Investing in Innovation, and Every Students Succeeds Act.

A host of school choice initiatives, including the federal Charter School Program and state public and private school choice programs, also owe their inspiration to the forty-first president’s administration.

In forming the national education strategy for the modern education reform era that began with A Nation At Risk, President George H.W. Bush forever changed the trajectory of K–12 education.

In the words of Lamar Alexander, now Tennessee’s senior U.S. senator, “I would say he was a pioneering president on K–12 education and many of the things that he helped launch twenty-five years ago we see in place in states today.”

Bruno V. Manno held several senior positions in the U.S. Department of Education from 1986 to 1993, including assistant secretary for policy and planning during the latter part of the Bush administration. He is also a trustee emeritus of the Thomas B. Fordham Institute and senior advisor to the Walton Family Foundation’s K–12 Education Reform Initiative.

This article first appeared in a slightly different form on the Walton Family Foundation blog.