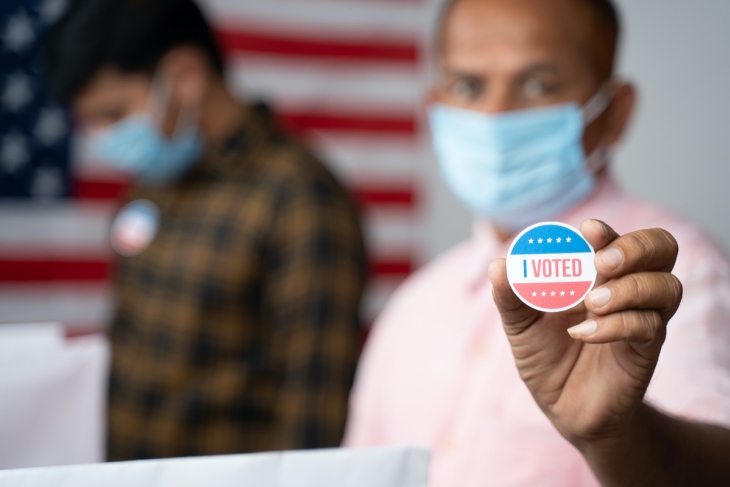 Divisiveness, anger, frustration, mistrust, and threats. That is the narrative emerging around the 2020 presidential election. What I saw on election day as an Ada County poll worker in Boise, Idaho, couldn’t have been more different. The election I witnessed and served was distinctly positive and hopeful. Turnout was high, with more than 80 percent of registered voters across the state voting. More than 800 citizens came to vote at my polling station alone, and many for the first time ever or for the first time in many years. One guy told me he hadn’t voted in thirty-four years.

I was raised to not cry in public, but watching an elderly son help his ninety-seven-year-old mom wait in line and navigate the election process brought me to tears. She was going to vote no matter what. No pandemic, no lines, nothing would keep her from performing her civic duty. Other elderly citizens also struggled. Some were actually in physical pain as they used their walkers or their canes when waiting in line and voting. They had to sit in chairs to fill out their four-page-long ballots, but they did it. Again, nothing was going stop them from voting.

The recently naturalized American citizens who were voting for the first time were also inspiring. The couple from a war-torn Eastern European country who clapped for each other as they inserted their ballots into the voting machine was but one example. Young people voting for the first time were met with congratulations and acknowledgement. Tough men wearing their work clothes and bright-colored vests showed up to vote even though it was costing them money to do it. “I’m paid by the hour,” one guy shared. Another apologized for making the computer screen dirty with his hands. He was a tow truck driver and came straight to the polls between hauls. The young mom with three young children who struggled to get her driver’s license out of her handbag while she held one child never lost her smile as she registered. She was showing her children the importance of voting.

Many voters had to register with us because they hadn’t voted in years, or they were voting for the first time, or they were new to Idaho. My job was to help them. At the start of the process, I had to ask them two questions. First, are you a U.S. citizen? Second, are you at least eighteen years of age? Per the first question, everyone answered “yes,” and they answered it with pride. The second question brought on laughs. Men and women with gray hair and seasoned smiles would say things like “unfortunately” or “thanks for asking” or “you are so kind.” A few looked at me like I was just trying to be a wisecracker.

One young man showed up to vote about an hour before the polls closed. He didn’t have proof of residence. Our rock star election judge patiently and kindly explained to him what sort of evidence was needed to meet the requirement. She urged him to get it and to come back and vote. Five minutes before the closing of the polls he ran into the polling place with the right evidence. He was our last voter! He hadn’t given up. It was too important.

As inspiring to me as the voters I met were the team working the polls with me. A couple were high school students who couldn’t vote, but who wanted to be involved in the election and to help. They worked fourteen hours with few breaks and adapted to every challenge thrown their way. Two of my colleagues were military veterans, and listening to their stories of service during the few slow times during the day reminded me how lucky we are to have such dedicated, selfless people volunteering to serve us all. One of these fellas unleashed his inner child when he was given the chance to yell outside “the Polls are open!” “Isn’t this great?” he said.

Before the polls opened at 8:00 a.m. MT, our poll chief asked us why we were doing this work on Election Day. One guy said simply, “this country has been really good to me.” Indeed. I hope we don’t blow it in the coming days, weeks, and months.

Terry Ryan served as an Ada County Poll worker in Idaho. His day job is serving as CEO of the Boise-based education nonprofit Bluum.