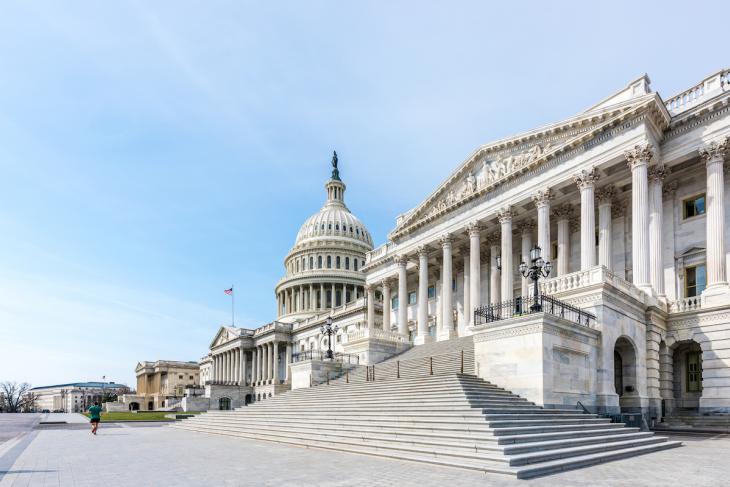 This essay is part of the The Moonshot for Kids project, a joint initiative of the Fordham Institute and the Center for American Progress. It will run in three parts, with the third appearing in future issues of the Education Gadfly Weekly. The first introduced the federal Charter Schools Program (CSP)—which, with four billion dollars of funding over twenty-five years, has turned out to be one of the largest and more successful examples of government-supported R & D in K–12. Above all, it’s helped spread charter schools throughout the country, many of which otherwise could not have afforded to launch.

Clinton entered the Oval Office in January 1993 primed to develop his own version of a federal program to advance the national education goals and eager to include public-school versions of choice in that plan. Congress was still in Democratic hands. (That would change two years later.) The key Senate Democrat was already charter-receptive. So, drawing on long experience as governor of South Carolina, was education secretary Richard Riley. And so was the Democratic Leadership Council, which helped craft Clinton’s education plan.

In less than two years, Congress enacted both the “Goals 2000” act (a close cousin of America 2000) and the ESEA reauthorization known as the Improving America’s Schools Act. Included therein—pushed by Lieberman and Durenberger, as well as Chairman Kennedy and the Clinton team—was a small, new program of federal support for charter creation and expansion. Congress’s stated intent was to “improve the United States education system and education opportunities for all people in the United States by supporting innovation in public education in public school settings that prepare students to compete an contribute to the global economy and a stronger Nation.” Note the emphasis on “innovation.” It seems clear in retrospect that lawmakers viewed this new program in the frame of “research and development.”

The program’s actual operations, however, were somewhat more prosaic, as federal grant programs nearly always are. As explained by an analyst at the Congressional Research Service, federal support through CSP “is provided to assist with the opening of new charter schools and for the funding of charter school facilities.” In other words, the goal was to support innovation but the mechanism was to open more schools.

And the chief mechanism for doing that, from CSP’s outset until today, is via competitive grants to states of federal dollars that the state then disburses to assist with several years of planning and start-up costs for individual charter schools. Today, that can total as much as $1.5 million for a school over its first few years. In essence, the federal dollars enable those seeking to launch a new school to get it planned and up and running, since state operating dollars generally don’t start flowing until students have their butts planted in classroom seats.

From the very beginning, however, this relatively straightforward modus operandi presented questions that Congress and the Department of Education had to answer. What happens, for example, in a state with a charter law where people want to start schools but the state education agency—the usual recipient/disburser of federal CSP dollars—cannot or will not apply for such funds? Since the program is competitive, not formula-based, meaning that interested states must complete a thorough and convincing application in order to be considered for funding, charter advocates recognized that advancing the national goal of more such schools would be hard to do where state education agencies balked at participating. This conundrum yielded a pragmatic statutory fix: A state’s education department is no longer the only eligible applicant. The governor’s office can also apply—and then administer the funds—as can a statewide charter school board or “support organization” such as the Arkansas Public School Resource Center or Idaho’s BLUUM organization. Individual schools may also apply directly for “developer grants.”

Another challenge was deciding what federal rules a participating state must follow when determining what charter schools and would-be operators qualify for support. There was understandable angst in Congress that private schools might sneak in, that schools that discriminate on prohibited grounds (e.g., race, gender, handicap) might seek funding, and that schools not truly open to the public (i.e., those practicing selective admission) might qualify. So various prohibitions and regulations followed, in essence creating a federal definition of “bona fide charter school.”

This was not, however, just a matter of constraining states and schools. The program also tried, via its competitive priorities, its peer reviews and some of its requirements, to incentivize states to pass stronger charter laws (and, of course, to submit timely, persuasive and well-crafted applications for federal funding). The potential reward, obviously, was bettering a state’s chance of obtaining one of those competitive grants. Although such fiscal incentivizing and competition jiggering by Washington invites criticism—as befell Race to the Top a couple of decades later—it’s also a much-used strategy by which Uncle Sam seeks to induce change among those seeking federal dollars. In retrospect, it was good for the charter movement that CSP functioned via competitive rather than formula grants. No state (or school) was “entitled” to these dollars. It had to show merit and promise, at least as defined by Uncle Sam.

In other words, CSP never put federal funds on a stump for anyone to grab in the name of more charter schools. There were always requirements and norms, and some of them brought complications of their own, as well as standardization that doesn’t always comport with innovation. Washington declared, for example, that the way to ensure that a charter school was truly “public” was to handle admissions via lottery—and most state charter laws concurred. But it’s never quite that simple. Shouldn’t the siblings of kids already in the school get some sort of preference for admission so that families don’t get split up? Shouldn’t those living in the school’s neighborhood have an advantage? What about the children of those who teach in the school? And on and on. As is typical of federal programs in every realm, rules beget rules and statutes grow longer. In this case, the lottery requirement effectively ruled out the kinds of charter schools that might want to limit their enrollment to a special population, such as gifted-and-talented students (though it was okay to specialize in youngsters with disabilities), and the regs could have (but in the end didn’t quite) barred single-sex charters.

It was also evident from day one that start-up funds for school operators would not resolve all the challenges and obstacles to creating and operating successful schools. Facilities have almost everywhere been a huge headache for charter schools, and there was much interest in Uncle Sam helping, whether with outright subsidies or with credit enhancements such that it would be easier to lease or purchase viable places to put those kids and teachers. School authorizers, too, needed help in many places if they were to succeed with school monitoring and quality control, achieving the tricky balance between vouchsafing a school’s autonomy and ensuring its compliance.

Hence as the years passed, CSP grew more complex and multi-faceted as well as larger. Here’s a summary of changes made in the 2015 ESEA reauthorization (incorporating some made in the intervening years), as framed by the National Alliance for Public Charter Schools, which is now the leading advocacy organization in this space:

As that summary implies, today’s CSP is multifaceted. The largest component is still the grant program that invites states to compete for sizable sums that they then parcel out to within-state applicants seeking to open new charters and/or expand and replicate “high-quality” schools. But what about successful charter management organizations (CMOs) that operate in multiple states and seek to grow their portfolios? That doesn’t align well with a state-based funding program. So a provision was added to CSP that allows the U.S. Secretary of Education to make direct grants to proven CMO’s to assist them to grow. Thus, for example, 2018 brought fifteen such grants, all lasting five years, ranging from $1.5 million for a single Phoenix school chartered by Arizona State University to $117 million to assist with the rapid, multi-state expansion plans of Texas-based IDEA Public Schools.

CSP has also had two programs to assist with the cost of school facilities. The larger one--$40 million in fiscal 2018—is for “credit enhancement,” which makes it easier and cheaper for charter operators to get loans, mortgages and other forms of credit on the private market. Additionally, the Department of Education is winding up an “incentive grant” program that provides matching funds to states for actual school facility subsidies.

Besides all that, CSP supplies “national dissemination” grants to organizations that “support” charters and the charter movement. 2018 saw eight such grants made, totaling $16 million (over the multi-year life of the grants) to groups such as the National Alliance for Public Charter Schools, the National Association of Charter School Authorizers, and the California Charter Schools Association.