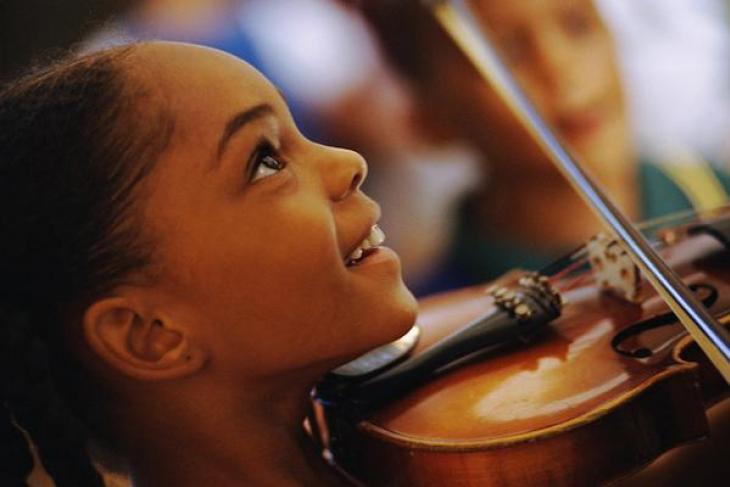 There are two ways to read this report of a first-of-its-kind arts education experiment from Rice University’s Kinder Institute for Urban Research. The first is with a measure of relief. The authors claim measurable academic, social, and emotional outcomes associated with arts education for elementary and middle school students. Bravo! The second is with a touch of vexation, perhaps sadness, or even resignation. Do we really need a randomized control trial study to justify the arts as an essential part of a well-rounded education? If a rock-bottom basic function of K–8 schooling is to expose children to the broadest range of human knowledge, discovery, and expression (that is the function, right?), then a permission slip is hardly needed to include the arts. What would we do if the results had proven no measurable outcomes? Would some argue to remove the arts from the school day?

Alas, that ship has sailed. Arts education has been in decline since the 1980s, note Daniel H. Bowen of Texas A&M, and the University of Missouri’s Brian Kisida, the present study’s coauthors. The emphasis on standardized testing in reading, math, and other core subjects since the passage of No Child Left Behind has also “coincided with notable declines” in exposure to the arts in school, they report.

Bowen and Kisida studied data and survey results from schools participating in the first two years of the Houston’s Arts Access Initiative, an ambitious program that aims to increase access to arts education, particularly for disadvantaged students, through partnerships with local artists and cultural institutions. Because the initiative was oversubscribed in its first two years, Kisida and Bowen had the opportunity to compare outcomes among students at participating schools to those who applied but were deferred—a study group comprising more than 10,000 students in forty-two schools. The results is the first ever, large-scale, randomized controlled trial study of such a program. The arts educational experiences had “remarkable impacts” on academic, social, and emotional outcomes, the duo reports.

Compared to students in the control group, kids exposed to the various arts opportunities in the Houston study experienced “a 3.6 percentage point reduction in disciplinary infractions, an improvement of 13 percent of a standard deviation in standardized writing scores, and an increase of 8 percent of a standard deviation in their compassion for others.” Among elementary school students, arts education also enhanced school engagement, college aspirations, and empathy with others—a finding that should resonate particularly among those focused on social and emotional learning. In an essay for Brookings’s Brown Center, Kisida and Bowen note that school systems rarely collect data on arts programs. Moreover, they write that “the most promising outcomes associated with arts education learning objectives extend beyond commonly reported outcomes such as math and reading test scores.” This is encouraging news and appears to be borne out in their findings, but let’s not be too quick to assume no benefits in general literacy. Kisida and Bowen report positive effects on student writing. A linchpin argument of E.D. Hirsch’s Cultural Literacy and subsequent works is that mature language comprehension rests on a body of knowledge common among writers and readers, speakers and listeners, who are broadly fluent in their shared histories and heritages, including the arts. In a well-rounded education focused on raising readers, art should have no lesser place of privilege than history, science, or literature—it’s all part of the mental fitments that furnishes the minds and enlivens the discourse of literate Americans. This powerful literacy-based argument for arts education has been available to advocates all along, and should weigh strongly against any impulse to reduce arts education “because testing.” Nonetheless, Kisida and Bowen note that “a critical challenge for arts education has been a lack of empirical evidence that demonstrates its educational value”—a sentence that I hope was as hard to write as it is to swallow, given that they also note that an “overwhelming majority of the public agrees that the arts are a necessary part of a well-rounded education.”

There was an interview more than a decade ago with Geoffrey Canada, the founder of the Harlem Children’s Zone, describing education funders’ demands that he demonstrate the value of arts education for his students. Canada grew exasperated noting the $700 billion spent on Wall Street bailouts in 2008. “Then somebody asks me if kids should take violin and do I have evidence?!”

Well, now you have some.