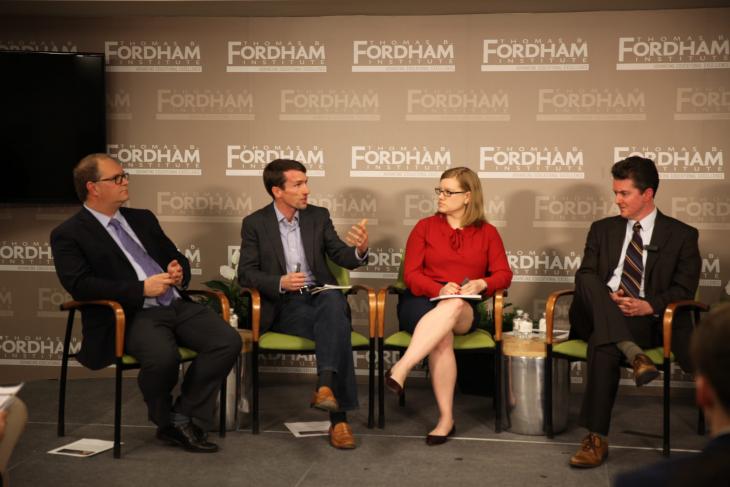 During his campaign, President Trump promised a focus on school choice to the tune of $20 billion. Although few details have been offered about his ideas, the Trump administration appears to be taking steps to follow through—starting with the nomination (and now confirmation) of longtime school choice advocate Betsy DeVos as America’s next education secretary.

With a choice supporter in place as the nation’s top education leader, the Trump administration could soon begin crafting its plan for a national school choice program. There are a few options the administration could pursue, but creating a tax-credit for individuals or corporations who contribute to scholarship granting organizations seems to be the most politically feasible. These scholarships, commonly referred to as vouchers, enable eligible students to attend a private school using public dollars—and as is the case with many public-private programs, they are hotly debated.

Part of the reason the voucher debate is so fierce is because of the research associated with it. Although early studies found positive impacts, recent studies of programs in Louisiana and Ohio have found less encouraging results. This now-mixed bag of findings leaves policy makers—and the Trump administration in particular—with a complicated problem: What’s the best way to interpret voucher study results? And how should future voucher programs be designed to ensure the best results?

To aid in answering these questions, the Thomas B. Fordham Institute recently hosted an event that explored possible causes for the varying results. David Figlio, the Director of the Institute for Policy Research at Northwestern University, opened the event by explaining the findings from his recent Fordham study on Ohio’s EdChoice Scholarship program. Figlio focused specifically on two outcomes: Although eligible students who used a voucher fared worse on state exams than students who remained in public schools, the program modestly improved the achievement of public school students who were eligible for a voucher but did not use it. The “overwhelming majority of Ohio kids were doing better as a consequence of this program,” Figlio summarized. “But for the kids who were [actually using the voucher], it looks like they might have been doing worse. Maybe a lot worse.”

Figlio was careful to point out that there could be several explanations for the mixed results, including the fact that public schools must take state tests far more seriously than private schools due to state accountability measures. “Some of this difference almost surely has to be due to the effects of accountability and the fact that there was some teaching to the test going on,” he noted. He also pointed out that private school performance is just as varied as the performance of traditional public and charter schools. As a result, the Ohio findings could reflect that “the private schools these kids were going to just are not that great, on average.”

After the opening presentation, event moderator and Fordham President Mike Petrilli introduced a panel of experts from a variety of education policy backgrounds. Douglas Harris, Tulane professor and director at Education Research Alliance for New Orleans, started the discussion by pointing to a possible explanation that Figlio overlooked: “One possible explanation that voucher supporters have cited for why the results are negative in Ohio and Louisiana is that they’re too regulated,” he said. When Figlio agreed and mentioned that the better private schools may have chosen not to participate because of the additional regulatory burden, Harris followed up by arguing for “a more nuanced conversation about what we mean by regulation.”

When Petrilli asked how she would summarize the school choice research, Lindsey Burke, director for education policy studies at the Heritage Foundation, pointed to the New England Patriots, who lost only two games during the NFL’s most recent regular season. She compared the Patriots’ win-loss percentage—which earned them a trip to the Super Bowl—to the number of school choice studies that show positive versus negative effects. “I look at that and think that's a record that Bill Belichick would be pretty proud of,” she concluded.

Not all the panelists agreed—Harris argued that the Detroit Lions (and their historically losing record) would be a better analogy, since the average treatment effect on test scores across voucher studies is either negative or neutral, depending on which studies are included. He also pointed out that although long-term outcomes appear to be more positive, there isn’t much supporting evidence. Figlio added that although the overall pattern of effects is indeed more favorable than the isolated results out of Ohio or Louisiana, it’s important to recognize the differences between the various studies that make up the pattern. For instance, while some studies examined broad-scale voucher programs, others took a look at smaller, privately-funded programs. Also contributing to the overall pattern are multiple studies of the same program. In other words, although there is a general pattern of positive effects, the evidence isn’t completely definitive.

Figlio then changed gears by mentioning the role parental preference should play in the conversation. Regardless of study results, he said, “parents are keeping [their kids] in those schools that they chose.” Burke agreed, saying that there are schools whose students post impressive test score gains without much to show for it later in life. Although West also agreed that “reading and math scores are only one tiny fraction” of what many people care about when it comes to schools, he cautioned against using poor test scores to justify the need for school choice, only to turn around and dismiss low test scores when evaluating school choice programs.

Next, Petrilli brought up that many choice advocates support charters, but not vouchers. He acknowledged a few reasons why some reformers hesitate to support vouchers, but zeroed in on one argument in particular: that charters “work,” but vouchers don’t. When asked why this might be the perception, West pointed out that charters—which are indeed showing dramatic positive effects in places like D.C. and Boston—are “funded more generously and have a variety of additional supports.” West also offered a hypothesis about why the Ohio and Louisiana voucher studies showed negative results, while early studies of Florida’s program showed positive impacts: “I actually think these scholarship granting organizations may play an important role as a market maker connecting families to high-quality schools,” he said. “The Florida organization is actually incredibly robust and serves as a great source of information for parents, an advocacy organization as well. So I do wonder if that may be something to pay attention to.”

Harris outlined two reasons why private schools are reluctant to participate in voucher programs. “One is that they are worried about future regulation, so not necessarily what is happening at the time but what might happen in the future,” he explained. The second is “whether they can be restrictive and continue to be restrictive and select students that they want to be in those schools, which gives these schools an advantage over traditional public schools.” Burke, meanwhile, spoke to the dangers of overregulation, pointing out that strict oversight hasn’t worked in the public school sector, and “we don't want to layer that system that hasn't worked onto a private market.”

To close, Petrilli asked the panelists to share their advice for policy makers looking to design a federal tax credit program. West emphasized the importance of certainty. Allowing schools to expand and allowing new schools to emerge isn’t going to happen “if there is doubt each year about whether funding is going to be available or uncertainty about the long term status of the program,” he said. “There needs to be some way to allocate tax credits or the funding generated by the tax credits across states in a way that is predictable, over time.” Earlier in the discussion, Harris and Figlio offered an additional suggestion: Programs could specifically target low-income and urban students. Harris explained that targeting these students is logical because the best results among voucher studies come from urban programs, while the negative results (like those from Louisiana) come from mostly non-urban programs.