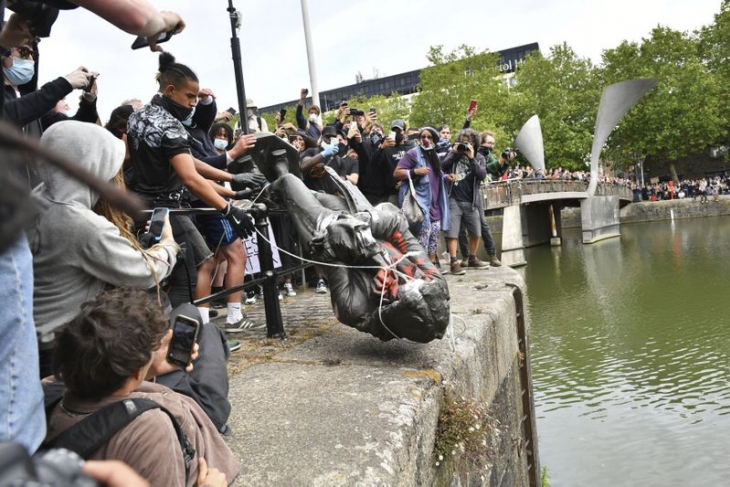 Theodore Roosevelt’s statue is being removed from the front entry of the American Museum of Natural History that he did so much to help create.

Portraits of four previous Speakers were removed from the Capital’s corridors last week by order of Nancy Pelosi, although they led the U.S. House of Representatives for a total of ten years.

George Washington’s memorial in Baltimore has been defaced.

Washington and Jefferson were both toppled in Portland.

Washington and Franklin statues have been spray-painted in Philadelphia.

Andrew Jackson’s statue needed police protection to avoid being pulled down by vandals in Lafayette Square.

Christopher Columbus’s very name is turning into a four-letter word, joined by the toppling of statues commemorating him all over the place.

A group of Wisconsin protesters even brought down—and tossed into Lake Monona—the statue of a little-known immigrant from Norway who served as a colonel in the Union army.

Nor is this violent repudiation of the past confined to American shores. Churchill’s statue has been vandalized and may be moved from Parliament Square to a museum, though one must wonder if the defacers wish that Hitler had won. And Cecil Rhodes’s statue will vanish from Oriel College, Oxford, though it’s doubtful they’ll surrender the mining fortune that pays for Rhodes scholarships.

What’s next? Must Columbus, Ohio, now change its name? How about Jefferson City, Missouri? Washington and Lee University? Cortez, Colorado? Yale University? Then there’s the nation’s capital, itself, where Fordham’s main office is located. Why should its name memorialize a slave-owner? And what of that tall obelisk honoring him just south of the White House? Hmmm, “White House.” Perhaps appropriate for the incumbent but surely a poor choice of names for the chief executive’s residence going forward.

What’s happening to our history? Is it getting toppled, too, because we disapprove of some actions and practices of past individuals, never mind how central their roles may have been to the history that we want our kids to learn more about?

A clear and present risk in history education has long been what historians call “presentism,” viewing the past—and passing judgment on its events and actors—through the lens of today’s values and priorities. Viewed through that lens, what’s important about an historical event or person isn’t why it happened the way it happened when it happened, but rather our opinion as to whether it should have happened. What gets added in our hyper-woke age is the judgment that, if any aspect of an historical personage or event is now unpalatable, that person or event should be criticized, disavowed, and if possible, erased, no matter what else they may have accomplished or what difference they may have made.

I understand, obviously, that putting someone’s likeness on a pedestal in the form of a statue, or on a high-profile wall in the form of a portrait, serves to highlight and call attention to them, perhaps glorify them. But mankind has been doing that forever. Nobody likes Satan or the goddess Kali but their images are all over the place. So, too, the unlovable members of the Borgia family, not to mention Hitler and Stalin. Those folks aren’t necessarily depicted and displayed in public venues because viewers—or the artists—think well of them, but because they are famous personages who played large roles in shaping the world we live in today.

When it comes to Jefferson, Roosevelt, and Churchill, say, they’re depicted in portraiture and statuary because they did great things that most people today appreciate and approve, notwithstanding other parts of their lives that we may now deplore. Do the deplorable parts justify defacing or tearing down their images?

I get the distinction between them and Confederate generals, most of whose statues went up during the Jim Crow era. If their principal contribution to U.S. history was doing their utmost to preserve slavery while sundering the union, I can’t defend celebrating them—though, once again, displaying Stalin’s portrait doesn’t necessarily signal praise. I do think kids should learn a lot about the Civil War, however, in which the likes of J.E.B. Stuart were as consequential as William Tecumseh Sherman. (It also needs to be recalled that Robert E. Lee was a distinguished officer in the U.S. Army—including service in the Mexican War and superintendent of West Point—for thirty-two years before, as we now say, “turning traitor” after Lincoln offered him command of the Union army.)

I also get the distinction between statues torn down because people disapprove of the person being commemorated and a few situations where it’s more about the statuary itself. The main issue with the Roosevelt statue facing Central Park isn’t about him so much—though he definitely slaughtered a lot of animals—as the depictions of a Native American man and an African man at his side. Keep in mind, though, that when that “heroic” grouping debuted in 1940, it wasn’t widely seen as offensive, however much it may appear that way to today’s onlookers.

Here’s the point: Few young Americans are learning American history in school. We have ample data showing that, including the recent NAEP results. Insofar as they’re learning and perhaps retaining some knowledge of the nation’s past, it’s mostly coming from other places, from Ken Burns documentaries, from David McCullough’s books, from watching Hamilton and from visiting Monticello and Mount Vernon and Mt. Rushmore and Independence Hall. And, maybe, just maybe, from eyeballing and driving by and walking past and perhaps visiting the statues and monuments that have been erected in traffic circles, public parks, the National Mall, and elsewhere. Do we really want them to learn even less? And do we really want them to view George Washington as a slave owner rather than the “father of his country”? To regard Churchill as an imperialist or as the leader who wouldn’t appease Hitler and roused England to fight back? Of course they should learn both. But that won’t happen if we erase them from view as if they never existed.

As the Wall Street Journal editorial board correctly noted, “This current anti-monument wave degrades what originated as a legitimate grievance: the presence of Confederate monuments, many erected during the Jim Crow era to perpetuate the Lost Cause myth and advance white supremacy. But that idea has been taken over now by what has turned into a mob intent on willy-nilly eradication of chunks of American history.”