Education philanthropy and the unfinished business of policy reform 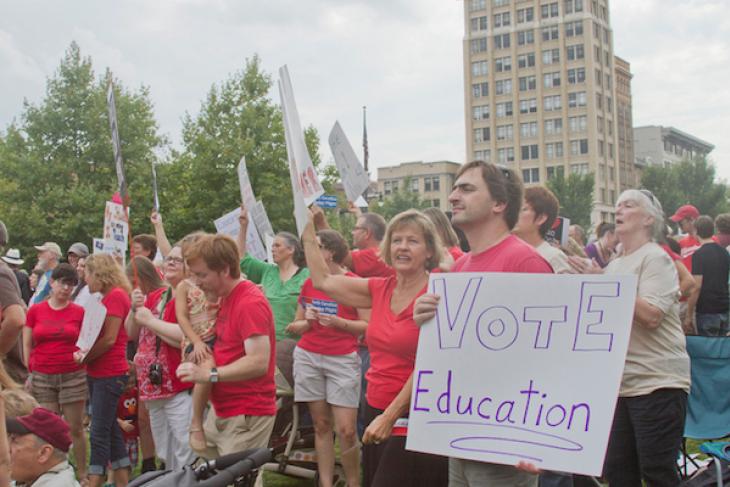 The era of hyperactive education policymaking is about to come to an end.

That might be hard to believe, given this summer’s high-decibel policy disputes, both in Washington and in the states. The implementation of the Every Student Succeeds Act (ESSA); debates about a potential large-scale federal school-choice initiative; and deep disagreements about civil rights enforcement continue to captivate—and roil—all of us involved in education policy, in D.C. and around the nation.

But peek around the corner, and the picture looks much different. ESSA plans will be approved, and states will go on their merry ways. The Trump Choice proposal will almost surely be DOA in Congress. The Office for Civil Rights will take a new tack, and that will be that. The Department of Education will go back to being a sleepy little agency. And at the state level? There will be perennial fights over funding, charter expansion, and the teacher pipeline, but what’s the next big issue to captivate lawmakers on the education front? There isn’t one.

None of this is news to the big national foundations, which have played such a critical role in policy reform in recent decades. For that, they mostly deserve our thanks, but more often have enjoyed derision. To be sure, mistakes were made: Not understanding the limitations or unintended consequences of federal leadership on education; a disastrous, ill-timed excursion into teacher evaluation reform; a technocratic impulse that was insufficiently sensitive to parents’ concerns about issues like student privacy; and on and on.

Yet over the course of the past two decades, generous philanthropists helped to build a robust policy infrastructure that rests on high expectations for students. Many of us can remember when academic standards weren’t just low, they were non-existent. Poor kids in rural and urban communities got drivel, while affluent youngsters were expected to pass Advanced Placement exams. All that was considered perfectly natural, and legal. The No Child Left Behind years brought progress, though mostly at the lowest levels of performance.

But now, thanks in part to the support and leadership of national foundations, the “three-legged stool” of standards-based reform—high quality standards, tests, and accountability—is finally sturdy. The Common Core standards remain mostly in place in most of the country—often renamed, sometimes tweaked, but largely the same. Half of the Common Core states still use Smarter Balanced or PARCC assessments, which we at Fordham found to be first-rate, while other states have at least ratcheted up their definition of what it takes for students to be considered “proficient.” And under ESSA, states appear to be making their accountability systems both clearer and fairer: clearer by using A–F grades, five-star ratings, and the like; and fairer by focusing much more heavily on student-level growth, which credits schools for the progress that all kids make while under their tutelage.

It’s an understatement to say that getting to this point has cost a lot of sweat and tears, not to mention treasure. It’s possibly come at a short-term cost to student achievement, as states’ “accountability holidays” meant taking a break from actually holding schools responsible for boosting student outcomes. Perhaps that’s why the National Assessment of Educational Progress has been so flat as of late. But the holiday will finally come to an end, schools will start to get meaningful ratings against high standards, and we’ll see if that puts some gas in the student achievement engine.

Now the philanthropists, I’m hearing, are starting to wonder what comes next. A big part of the answer is not policy, but practice. Not federal and state, but local. Now that we’ve got a set of stable, rigorous standards; challenging, honest assessments; and fair, transparent school ratings, the action is in helping schools help kids make progress. Funders are wise, then, to focus on new initiatives around curriculum development and adoption, student assignments and grading, next-generation professional development, and efforts to integrate technology and personalized learning into the classroom. (Not just the reform stalwarts, like Bill and Melinda Gates and Eli and Edythe Broad, but the newer entrants too, like the Chan Zuckerberg Initiative, Michael Bloomberg, and the Emerson Collective.) Granted, doing any of this at scale, across America’s fragmented education landscape, is super hard. Still, here’s hoping they succeed.

But here’s hoping that they stay the course on the policy fight, as well. Standards, assessments, and accountability systems are not set in stone. They are under relentless attack from traditional education groups and libertarians alike, and can only survive with the vigilance and political support of state-based reform organizations and their allies in the business and civil rights communities.

And playing defense is not all that’s needed. For all the success we’ve seen in building better school-accountability systems, we’ve gotten almost completely rolled when it comes to holding students to meaningful standards. In many, many places, we’re loath to demand that young Americans actually demonstrate competency before moving onto the next grade, the next course, the high school graduation stage, or college. Everyone wants to be Mr. Nice Guy. No one wants to be the Grinch.

So teachers hand out A’s willy-nilly. Principals graduate kids by enrolling them in dubious, click-through, on-line “credit recovery” programs. State lawmakers, such as those in Ohio, run away from graduation exams in favor of competency-free diplomas. And community colleges remove standards for entry into credit-bearing courses. All this will produce is a generation of twenty-year-olds who read and do math at a sixth-grade level, and are unprepared for the real world. Good work, team.

The move to personalized learning will make this issue even more acute. Allowing students to proceed through courses, and even the whole K–12 sequence, at their own pace is a fantastic idea and will be a particular boon to high-achieving, low-income students—kids who have been neglected in the age of standards. But who will decide when a pupil is truly ready for their next step? How will we ensure that personalization doesn’t lead to lower expectations for poor kids? How will we make sure that students actually master the material before zooming ahead? Should we trust the purveyors of personalized learning programs? The same folks who brought us credit recovery initiatives?

These are not second-tier questions. They are at the heart of the education enterprise. And the only answer that stands up to scrutiny, I fear, is standards that are actually enforced. We need external assessments of whether students have demonstrated their competence and are genuinely ready for their next step. That inevitably means more testing—and real consequences linked to student performance.

That’s the sort of policy that other advanced countries take for granted, and that help to explain their superior student performance. But who in America, the land of second and third chances, is ready to stand up for that?

So funders, by all means, bet big on “place-based strategies,” school networks, personalized learning, better tools and training for teachers, and all the rest. But please continue your support and leadership on the standards and accountability front, too. We’ve come too far, and accomplished too much, to allow American K–12 education to revert to false promises, fake gains, and low expectations.