Cultivating patriotism is the first job of civics education 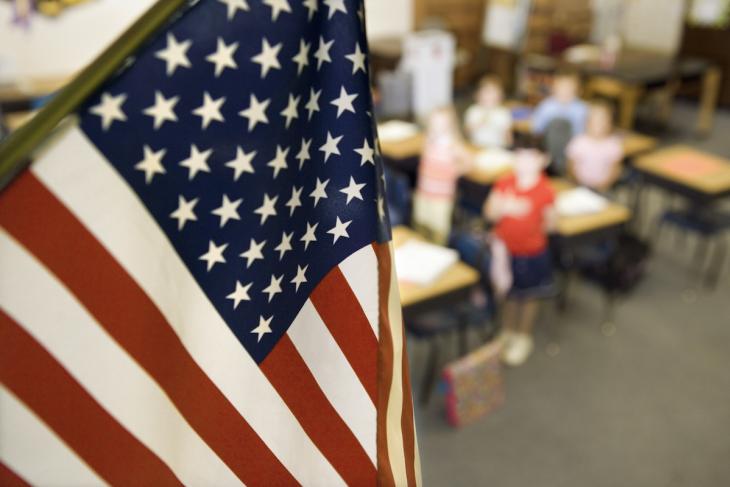 Editor’s note: On March 13, 2019, Thomas B. Fordham Institute senior fellow Robert Pondiscio was a panelist at an event hosted by the Albert Shanker Institute in Washington, D.C., titled “Civic Education: Is There Common Ground.” The following is adapted from his remarks.

It’s common and uncontroversial for teachers to express their goal to instill a “lifelong love of books or reading.” Why not a lifelong love of math? A lifelong love of science? Or art, or music, or history? Our job as educators is to ensure kids have the knowledge and skills they need to be happy, productive, and independent citizens. Why are we concerned at all with what they love or do not love?

Does that make you uncomfortable? Too overtly patriotic? Even jingoistic?

As teachers, almost all of us are public employees. We work for states, districts, and individual public schools. We draw a salary from public dollars paid by our fellow citizens to work in the public’s interest. Infusing children with a love of reading is laudable, but a love of country is indispensible. It’s our literal common ground.

In a talk several years ago, Yuval Levin remarked that “conservatives tend to begin from gratitude for what is good and what works in our society and then strive to build on it, while liberals tend to begin from outrage at what is bad and broken and seek to uproot it.” His observation takes us to the heart of a problem faced by those of us who seek to restore civics and preparation for citizenship to its historical role at the center of American public education. If some people suspect that civics is more about indoctrination than education, perhaps it’s because there is so little gratitude in it. Much current work and thinking in civics education, for good and important reasons, is informed and driven almost exclusively by what is “bad and broken” and seeks to uproot it, empowering students to amend, address, and fix it.

Thank goodness for those (mostly on the left) who have been outraged at segregation, child labor, and so on. That outrage keeps our nation improving. But how did it become some kind of secular sin to believe that our young people should revere the beliefs, the practices, the institutions, and the virtues that made America the envy of the world?

A few years ago, some colleagues and I at the Fordham Institute examined every one of the “mission statements” of the one hundred largest school districts in the U.S. to see how each explained how they go about the public’s business. It was an interesting exercise and, frankly, a bit sobering. The personal and private ends of education—preparation for college and career, for example—are much more on the minds of district officials who write and adopt these statements and goals than is the public virtue of citizenship.

Well over half—fifty-nine of the one hundred largest U.S. school districts—make no mention of civics or citizenship whatsoever in their mission or vision statements. Curiously, the word “global” appears in the mission statements of twenty-eight U.S. school districts—usually in phrases like “global society,” “global economy,” or “global citizens.” The words “patriotic” and “patriotism” do not appear at all. Neither does “America” or “American.” Not even once.

The question to consider is where we might make room in civics education for a sense of gratitude, for the blessings of liberty, our Constitutional freedoms, what it’s taken to secure those things for us, and for thoughtful pride and patriotism. If we want our students to be actively engaged citizens, invested in solving America’s problems, surely they must first feel some moral attachment our nation. Why would we expect them to make the effort otherwise?

As teachers, we are trained to avoid deficit-thinking, to build on students’ and communities’ assets, not to dwell on disadvantages or shortcomings. Yet when we turn to civics education, we—many of us—embrace a deficit model. Civics education, with its focus on the problems of democracy, and its enthusiasm for cultivating activism and “action civics,” may be somewhat guilty of self-marginalization, potentially alienating at least half of the country, people whose view of their country “begins from gratitude” and who are inherently suspicious of approaches that focus mostly or entirely on “what is bad and broken.”

In her book, No Citizen Left Behind, Harvard’s Meira Levinson makes a strong argument for action civics, which valorizes not learning about civics but doing civics by engaging in cycles of “research, action, and reflection about problems they care about personally,” particularly through political action. Levinson contrasts action civics with “service learning,” which is largely uncontroversial. Service learning, as Levinson explains, promotes “a vision of citizenship devoid of politics.” A vision that “can reinforce students opposition to governmental involvement and their sense of powerlessness to make a difference via political action.”

Levinson also takes exception to the kinds of tasks that low-income and immigrant youth of color do for free in service learning settings. Tasks like raking leaves, scrubbing graffiti, and serving food in soup kitchens, she writes, “are ones that they or their parents would normally get paid to do in low-skill service jobs.”

These are important and substantial critiques. But their overtly political nature cannot be avoided. Levinson, to her credit, is quite clear about it and unapologetic. The “apparently nonpartisan” ethic of service learning is “inherently conservative,” she writes. It is “merely participatory and ameliorative rather than activist and change-oriented.”

It is not my intention to condemn action civics. It is perfectly appropriate for students to learn where the levers of power in our democracy and how to pull them. The question is whether, through our discomfort with gratitude and patriotism, our deficit-thinking approach to civics and history, and an approach to civics education that is more likely to focus student attention not on our nation’s accomplishments but its shortcomings, whether we are at risk of creating in the minds of our students a vision of their country as exclusively antagonistic to their interests and well-being.

Let me be equally clear—and emphatic—that I am not arguing for a civics and history curriculum that views America through rose-colored glasses. A good course of study could be made from a close reading and discussion on the first day of class of the Preamble to Constitution, with careful attention to the enigmatic phrase, “in order to form a more perfect union.” Every day thereafter might be given to an examination of the ways in which have met that goal, exceeded it, and fallen short. Preparation for a life of civic engagement should include all three. Pride in our successes. Respect for the sacrifices made by previous generations. And a commitment to take up our shared and unfinished work grounded in gratitude.