Coming to our senses on poverty 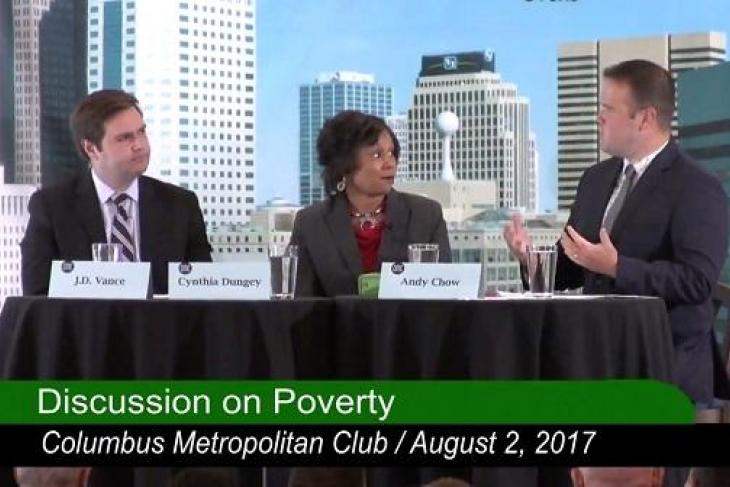 Somewhere between the Right and the Left—between the un-nuanced mantras of personal responsibility and big government—lie most of the problems related to poverty, as well as most of the solutions. So said Hillbilly Elegy author J.D. Vance in his opening remarks at an event in Columbus, Ohio, last week. He noted that putting both problems and possible solutions at the extreme end of either political ideology ignores reality and stymies understanding and effective action. Any successful effort to address poverty requires individuals to leave their extreme positions and to meet somewhere between. Fordham was proud to co-sponsor the event with the hope that Vance’s new and increasingly important take on the topic would find room at the table for education issues as well.

And education quickly became key to the personal stories shared during the panel portion of the event. Vance referenced the now-familiar story of his own difficult upbringing in Middletown, Ohio, as detailed in his bestselling memoir. Cynthia Dungey, Director of the Ohio Department of Job and Family Services (ODJFS), was co-panelist, and her personal story provided both counterpoint and amplification of Vance’s. As a woman of color who grew up in inner-city Columbus, Dungey had two working parents who—while not always secure in employment—were far more stable than Vance’s family. She knew neither the extent of her family’s poverty nor any other alternative beyond the neighborhood in which she grew up. The only pathway she saw was that of the working poor. That all changed when her family took the opportunity to send her to The Wellington School, a non-sectarian private school founded by central-Ohio entrepreneurs and located in a wealthy white suburb. “For the first time, I realized I was a minority,” she said. Not only was that revelation not a deterrent, that educational choice also made all the difference in her life. She was a member of the first graduating class of the then-new institution. New pathways were revealed to her, and perhaps most importantly so were the means to access them.

Knowledge of the pathways out of poverty was a key theme to the panel discussion, moderated by Statehouse News Bureau reporter Andy Chow. Not just the ends of those pathways—family-supporting jobs with benefits—but the beginnings as well. Good schools, supportive families and/or communities, elements of the Success Sequence, and common-sense government supports that are aligned with on-the-ground realities rather than political expediencies were all touted as key. “It’s terrible to be dealt a crappy hand,” said Vance, bringing both the political rhetoric and the scientific language of poverty into the personal realm. “But if you don’t even try to play it well,” that’s certain to lead to the worst possible outcome. It was the insistence that even a “crappy hand” doesn’t have to lead to individual, family, or community ruin that united Vance and Dungey. Their conviction on this subject—born of different personal struggles against the same enemy—was evident in their words.

“Social capital” encompasses a wide variety of resources, many of them intangible. Vance often tells the story of attending a networking event for Yale law students and being confused by many aspects of a formal dinner, from fork usage to wine choices and everything in between. Dungey characterized it in terms of access—to needed services, to role models, to a ride to work, etc.—and described the work of ODJFS as focused on improving the social capital of the citizens she serves across the state. The specific needs of poor citizens in rural Ohio are often different than those of inner-city residents, but the desired outcome is the same: stability, support, opportunity, and direction. Something as simple as an acknowledgement that “it’s okay to be smart; it’s okay to be successful” could go a long way in changing mindsets and disrupting generational dynamics. It is here where Vance and Dungey drew upon their disparate-yet-linked upbringings, noting that churches and other faith-based organizations were bedrock in their respective communities. Both expressed interest in re-engaging such organizations with the specific intent to go beyond provision of basic needs—like food and clothing—and to provide much-needed mentorship and pathway guidance. In the absence of stable families, positive role models, and ladders of support, the mantras of the Right and the Left—let alone political point-scoring that seems to occupy those on both sides—mean nothing and solve nothing.

While specifics of education policy were not topics of discussion at the event, the individual journeys of the panelists are heavily defined by education: Vance from a small town public school to The Ohio State University to the hallowed but bewildering halls of Yale; Dungey from a small non-sectarian private school that opened up eyes and minds to DePauw University to Ohio Northern. And perhaps it is here where the true “somewhere between” lies. Between the compelling public interest in educating its citizenry to the highest level possible and the personal responsibility of citizens to take best advantage of the educational opportunities afforded them lies education’s contribution to solving poverty. Vance says we must end the political blame game and stop the polarizing rhetoric that unnecessarily divides us. Dungey says we must remove obstacles and support citizens toward their pathway to success. We must see what success for poor children and families looks like—exemplified by Vance and Dungey—and do whatever is necessary to replicate all contributing factors for everyone.

Full video for the sold-out Columbus Metropolitan Club event can be found here. With grateful appreciation to the CMC.